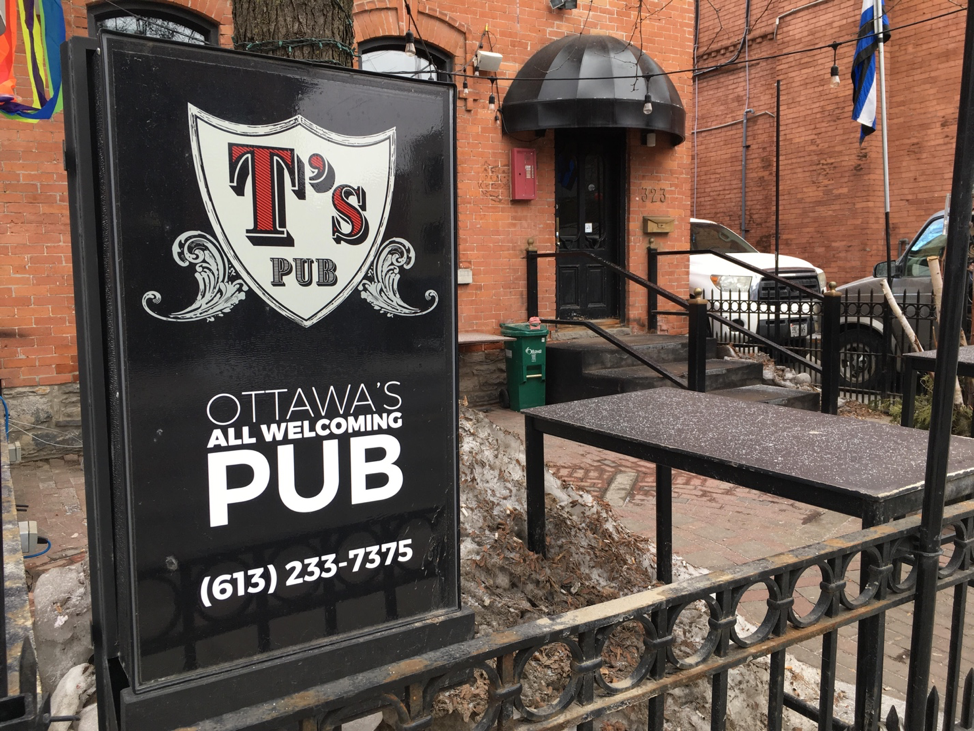 Nestled in the middle of Ottawa’s Gay Village, T’s Pub is a gathering place for gay men to socialize and interact. The pub’s mandate is to promote a gender-inclusive environment and a safe place for gay men to gather. Photo: Louisa Simmons, Centretown News
March 8, 2018

At the very mention of Bruce McArthur’s name, Julian Wilson’s voice grows hushed. The case of the alleged serial murderer now gripping Toronto’s gay village is also on the minds of some patrons during a recent Saturday evening at T’s Pub, a gay bar on Somerset Street West in Centretown — the heart of Ottawa’s own LGBTQ community.

The men gathered at the downtown bar all expressed sadness at the tragic loss of life in Toronto, as well as mixed feelings over how police in that city dealt with longstanding concerns that a suspected serial killer was targeting victims.

They talk, too, about how Ottawa’s own police force interacts with the gay community.

As a gay First Nations man, Wilson said that one negative interaction with a police officer three years ago soured his trust in the force’s stated commitment to providing support and protection to LGBTQ people.

“I feel really part of the community, but at the same time I have to watch my back all the time,” he said.

McArthur has been charged with six counts of first degree murder in a case that has rocked Toronto and the country at large. The alleged killer was first arrested on Jan. 18 in connection with the disappearances of Selim Esen and Andrew Kinsman, who had been reported missing in or near Toronto’s Gay Village.

Since then, the remains of seven men have been found in large planters on a property where McArthur did landscaping work, police have said.

Members of the gay community in Toronto have expressed anger that the police didn’t take seriously their fears of a serial killer at large long before McArthur’s arrest, while the city’s police have defended their investigation.

Jeremy Dias is a volunteer member of the Gay, Bisexual, Transgender, and Lesbian Liaison Committee made up of community and Ottawa Police representatives. He said the group’s lack of meaningful action highlights difficult relations between queer and trans people and the police, and that the McArthur case reflects similar concerns in Toronto.

“Past discrimination really haunts this specific case and indicates there is a challenge when it comes to the way queer and trans people’s complaints are treated compared to the non-LGBTQ community,” he said.

Dias said training for police is one way to improve relations with the community. Recently, the committee agreed to create an education sub-committee that will revise existing curriculum delivered to police recruits, as well as develop new training tools for all staff in 2019.

Ottawa Police spokesperson Chuck Benoit insists the force deals with all missing persons reports and complaints the same way. “Every case is investigated,” he said. “It doesn’t matter if it’s Indigenous, LGBT, if it’s a regular citizen or elderly — they’re all investigated in the same manner.”

Dias said that while police and LGTBQ relations are far from perfect, they are impossible to generalize. And, back at the gathering of men in T’s Pub, these mixed feelings are clear.

While some like Wilson expressed discomfort with police attitudes, others like Aaron McGuire and Peter (who preferred to go only by his first name), said they have never experienced marginalization by police.

Peter said that in the McArthur case, as well as in daily life in Ottawa, police are trying to do their job to the best of their ability.

McGuire agreed, saying one way to help foster safe spaces is to provide more outlets to gay men where they can seek help or feel safe reporting a crime.

These issues aren’t just going to go away, and for McGuire, one phrase sums all that up: “We’re queer, we’re here, and we’re still here,” he said.