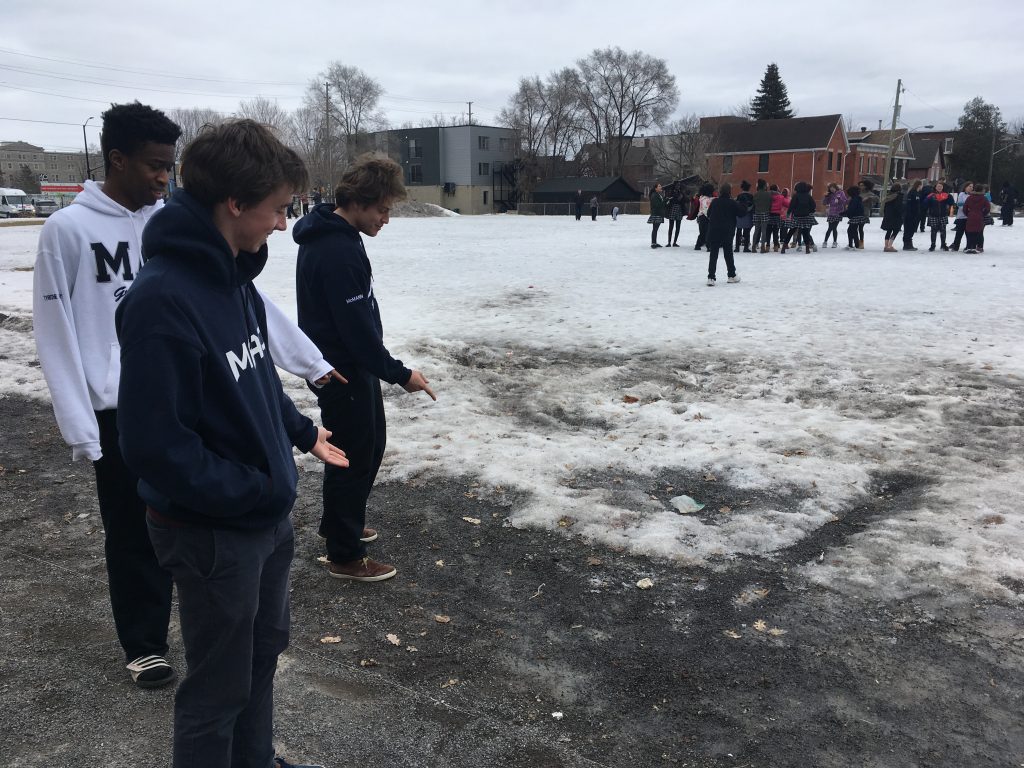 A planned $2-million upgrade to Immaculata High School’s sports facilities is seen as a boon for its athletic program, but has drawn some criticism from local residents who say they were left out discussions about the project.

Early April will see the start of construction on a new sports pitch at Immaculata. A $2-million contribution from the Ottawa Footy Sevens soccer league will fund an artificial turf field, improved fences and LED lighting, according to a recent Ottawa Catholic School Board news release.

The OCSB will also pay to replace the school’s gravel running track with a synthetic one.

“They approached us. It was simply a phone call that came in one day from one of the people that work at the Ottawa Footy Sevens, wondering if they could just have a conversation with us around whether we might be interested in this type of partnership,” said Immaculata principal Norma McDonald.

Footy Sevens co-owner Chris Surgeoner said the field would be available exclusively for students during weekdays until 6 p.m.

Footy Sevens leagues would have access to the field after school hours, and it would also be available to Old Ottawa East community members on a rental basis.

“In the evenings and weekends, it’ll either be used for our own leagues and programs, or it will be rented to any community group that wants to apply for that,” he said.

For student athletes at the school, the new facility could be instrumental in addressing some safety concerns.

Grade 11 student Ben Robinson plays football and rugby, and runs in track and field for the school. He said he’s seen friends fall on the school’s current unpaved gravel track. For Robinson and other students, a renovation would mean a safer track to stay at top performance level and prevent injury.

“Right now we have just a gravel dirt track really, so especially running around the corners, you can slip out, wipe out, hurt yourself. That can ruin a whole season potentially, so yeah, just from a safety standpoint alone, it’s a pretty big deal,” he said.

Coach Ben Seaman said the changes will bring a huge improvement. “It really is an actual game-changer because we have 500 students doing phys-ed classes at the same time,” he said.

The turf field would allow students who use it to be outside for months earlier than usual, and they wouldn’t deal with the same weather-related effects on the grounds that they would with natural grass.

“It’s going to get kids outside earlier and being physically active more often, and that’s what we’re really excited about,” said Seaman.

But some area residents say the school board and soccer league should have consulted with them first.

Joanne Lostracco, who lives on Glenora Street near where the pitch will be built, said the proposal came out of the blue and that the school’s neighbours in Old Ottawa East should have been informed earlier.

“It’s about asking the right kinds of questions to make sure that everybody — the users of the field of all varieties — that everybody has a chance to say what works for them,” she said.

Phyllis Odenbach Sutton, president of the Old Ottawa East Community Association, met with McDonald and another representative of the school board on March 2.

Odenbach Sutton said although she better understands the issues the school was facing with its athletic facilities, correspondence with neighbourhood residents beforehand would have eased questions surrounding things like public use and possible loss of green space.

“I always think communication before a project is announced is a better way of proceeding,” she said.

Construction of the new facility is set to wrap up in August.