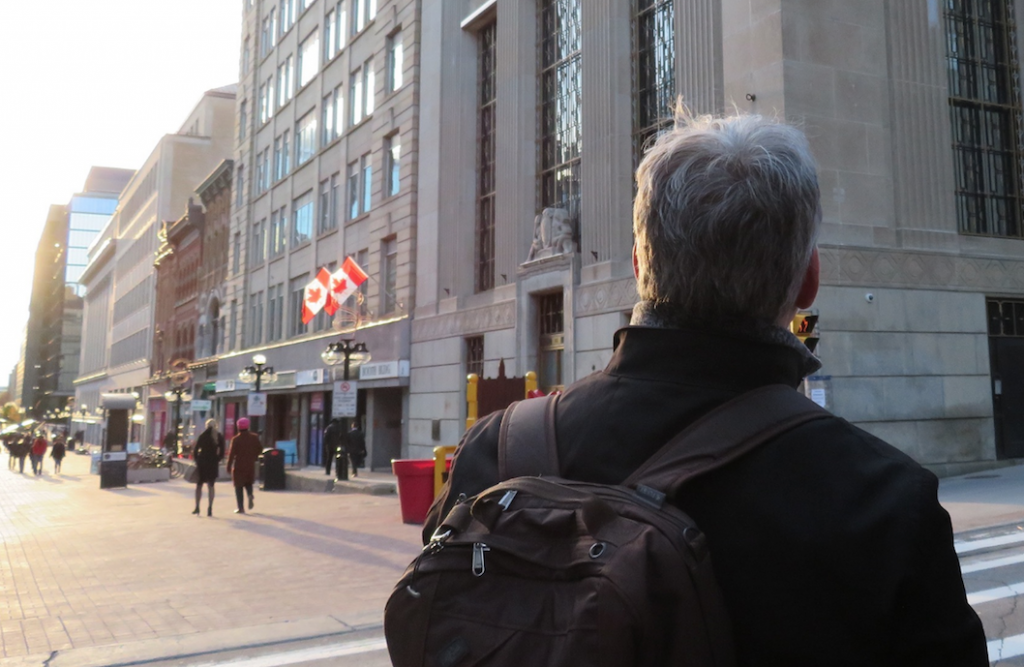 The city's Sparks Street Public Realm Plan has involved consultations with members of the public about the design and function of the downtown pedestrian mall. Photo: Centretown News.
March 11, 2018

The City of Ottawa’s ongoing look at the future of Sparks Streets suggests even fewer cars and more greenery are needed in the downtown retail and restaurant district.

People want less vehicular traffic encroaching on the pedestrian mall, said one of the city’s urban designers involved public consultations about the street.

The City of Ottawa’s second stage of the Sparks Street Public Realm Plan is underway to improve the area. This includes upgrading how the mall looks and how it functions.

Following a high-profile town hall on Jan. 13, the city said it would review more than 10,000 comments from the public.

“I was very impressed that people are very passionate about Sparks Street and wanting to see it revitalized,” he said.

“Some of the most consistent themes that we’re hearing from the public relate to creating a more natural and relaxing environment with more greenery, comfortable lounging furniture, free Wi-Fi, interesting accent lighting and water feature,” said David Atkinson, the city’s urban designer, in an email exchange.

The mayor said he likes the public’s idea of more greenery in the area.

“We could plant a series of evergreen trees in the middle of the street so they could be used during Christmas for lighting, and the rest of the year to soften the concrete image of Sparks Street,” he said. “You know trees, and plants, and flowers and shrubs humanize an area.”

Atkinson said more than 90 per cent of survey respondents also wanted to see stronger enforcement of restrictions for vehicles along the mall itself. They seem to think too many vehicles are being allowed into what is supposed to be a pedestrian area for deliveries and other reasons.

Stephanie Appotive, the director of operations at Howard Fine Jewellers, said she agreed with the general goals, but added that access to parking is essential for the street’s retailers.

“It’s actually turned into a hazard — a safety hazard because clients just want to pull over to the side of the road,” she said. “There’s no safe place for a safe drop-off zone for a taxi to pull into, or Para Transpo to pull into or for anybody who wants to drop somebody off.”

Howard Fine Jewellers established itself on Sparks Street in 1967. It was originally located on the second floor of the Birks Building, but moved twice before settling at 220 Sparks St., Appotive said.

The mayor said he’s also considering the businesses’ needs for vehicles on the street.

“It’s got to be early in the morning or after hours so they’re not disrupting what should be a pedestrian mall,” he said.

Watson said after the town hall he met with federal Environment Minister and Ottawa Centre MP Catherine McKenna and Public Services and Procurement Minister Carla Qualtrough to discuss the federal government’s place along the street.

“We really need to convince the federal government, which owns the north side of the street, to better lease out those properties at a faster pace, so we don’t have a lot of those empty stores at the front,” said Watson.

Appotive said she’s grateful the city is trying to improve the area.

“It is an old model in a contemporary world,” she said. “I hope they take into account what is needed in customers’ experience for shopping local.”

There will be another public event sharing the city’s findings by the end of the second stage in June 2018.