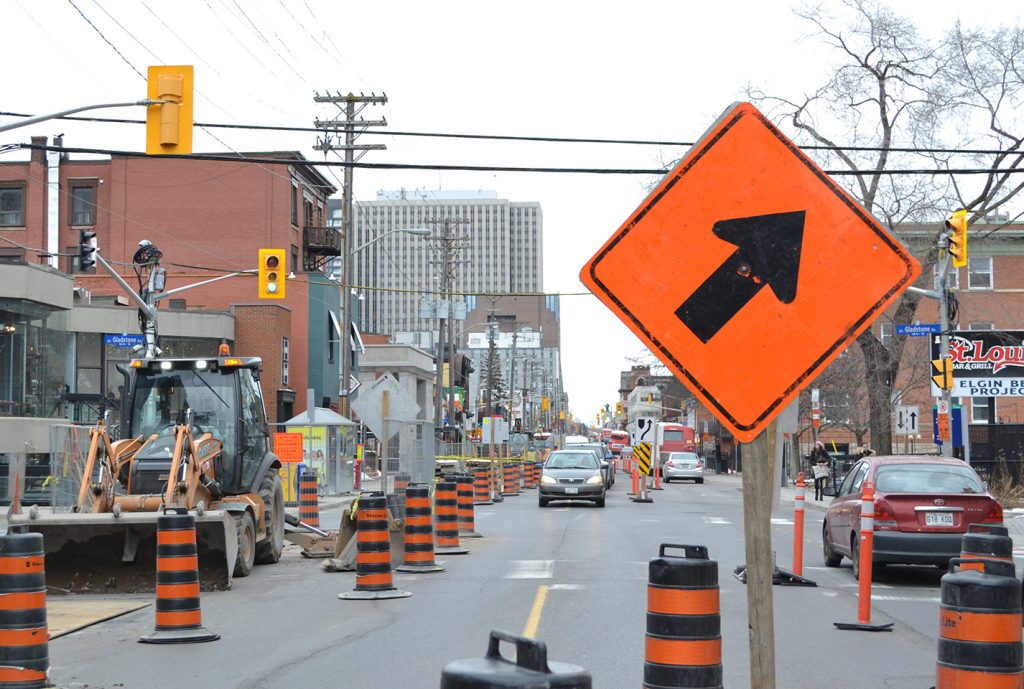 Major construction on Elgin Street began on March 12, as Bell Canada looks to update its infrastructures from McLeod Street to Waverley Street. The first phase is expected to take up to eight weeks with traffic being reduced to one lane in both directions. Photo: Alicia Wachon, Centretown News
March 13, 2018

Some business owners on Elgin Street are raising alarms about the unexpected March 12 start to construction work along the busy downtown restaurant and retail strip — just a  preview of a massive two-year rehabilitation project, now expected to extend into 2020, that’s designed to transform Elgin into a more pedestrian- and cyclist-friendly road.

The eventual closure of Elgin between Gloucester and Isabella streets at the height of the reconstruction project next year is raising fears of a traffic nightmare for area residents and motorists driving in the area, but businesses say they’ll face huge challenges attracting customers to a construction zone.

In a Feb. 23 memo to Ottawa council, Alain Gonthier, the city’s director of infrastructure services, announced that the initial disruption on Elgin would begin in mid-March as Bell Canada and Hydro Ottawa upgrade facilities, replace hydro poles, fix maintenance chambers and install ducts — all of which will result in lane reductions on Elgin and closures on side streets.

“One lane of traffic in each direction on Elgin Street will be maintained at all times,” Gonthier stated in the memo. “This work must be undertaken in advance of (the) planned renewal of Elgin and is expected to be complete by fall 2018.”

The work by Bell alone is expected to last about eight weeks, ending in early May.

While road closures may prove a headache for downtown motorists,  the most significant impacts will be felt by businesses on Elgin once full-blown road reconstruction begins in January 2019.

Charles Laperriere, manager at Datsun, a pan-Asian bar and restaurant located at the corner of Elgin and Gladstone, said he only heard about the initial construction a few weeks ago through a news article, but is trying to remain optimistic.

“At first it was intimidating to think of the repercussions it may cause on the businesses,  but in the long run it will benefit the whole city,” he said.

Other business owners have described feeling “blindsided” by the early roadwork and the expected duration of the overall reconstruction project.

“I’m quite stressed out,” Robin Coull, owner of the Pot & Pantry kitchen store at 244 Elgin St., told CBC. “I mean, my understanding was that the construction — which is necessary and I understand that — was going to be from 2019 to the end of 2019 and it was only going to be within that period . . . It really is a huge impact on businesses.”

Since early 2017, the city has been planning a transformative facelift for the popular downtown commercial and entertainment strip. Following public consultations and considerable debate about the planned upgrade,  the city recently confirmed that the road work would continue into early 2020.

Charlotte, a “mid-century inspired” bar and lounge, opened its doors at 340 Elgin St. last October. Mike Hall, Charlotte’s general manager, said the bar has been successful in the short time it’s been open, but he’s concerned about how months of construction will impact business.

“We were in the initial planning stages for Charlotte when (reconstruction) plans were confirmed for Elgin,” he said. “We understood the overall design goals meant significant disruption to traffic at our front door.”

According to Somerset Coun. Catherine McKenney, what people wanted to see most from the Elgin Street renewal project was wider sidewalks to make the area more pedestrian-friendly. The minimum standard sidewalk width is usually 1.8 metres in width, but after reconstruction the sidewalks along Elgin will be at least three metres wide.

However, McKenney has acknowledged that businesses were given little warning about the initial round of construction work and said city officials need to do a better job of communicating with restaurant owners and retailers along the street.

Despite the planned upgrades to  create a pedestrian dream along Elgin, some business owners are worried that both pedestrian and vehicular traffic will be hugely disrupted by the lengthy construction project, which is set to close down the street to traffic for nearly all of 2019.

Laperriere expects transportation difficulties to have quite an impact on business for both customers and employees.

“Getting to work and finding a parking spot is already a daily challenge. Here’s hoping that doesn’t get worse,” he said. “Locals in the Centretown area will still be the heartbeat of our establishment, but for outside traffic to make that commitment may make a dent in our business’s welfare in the short term. That pretty much goes without saying.”

While increasing the width of the sidewalk will accommodate more space for restaurant patios come summertime, it also means that the current 122 spots along Elgin for street parking will be cut in half, leaving only 61 after reconstruction.

Jim Sherman, owner of Perfect Books at 258 Elgin St., said of the reduction in parking spots will affect both customers and retail employees.

“We will have numerous challenges in terms of moving goods in and out of the store,” said Sherman.  “We do many special events where we need to transport boxes of books from the store to a remote site and back. That will be a major challenge if we cannot park near the shop.”

Hall said he and his team are doing all that they can to keep their guests coming back to Charlotte.

“A project like this is not enjoyable for any business, but that can’t distract us from our goals,” he said. “We may spend a bit more time with our guests, sharing our tricks of navigating access during construction, but I’m confident that the team of knowledgeable people, the beautiful space we’ve created and the value we offer will still be something people are willing to make an effort to get to.”

Mayor Jim Watson has promised that the parking garage at City Hall will offer free parking on weekday evenings and weekends in 2019 to compensate for the lack of street parking on Elgin during construction.

City council is also planning multiple public information sessions to keep citizens informed about the progress of the project.