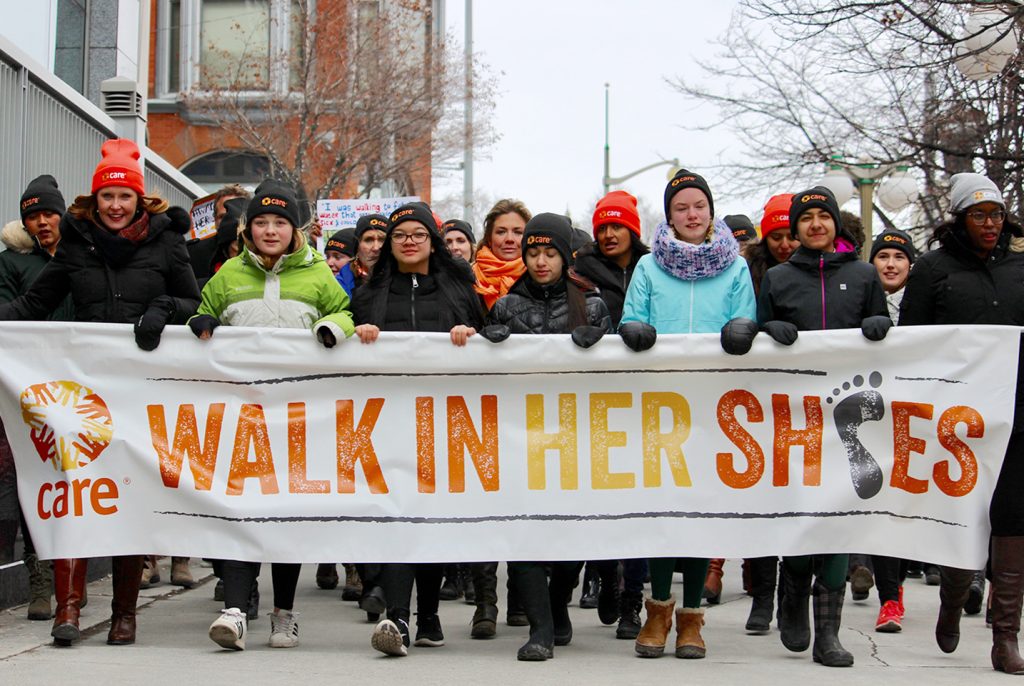 The 'Walk In Her Shoes' march is part of a month-long challenge organized by CARE International, which raises money to address global poverty. Photo: Aaron Hemens, Centretown News
March 13, 2018

In a show of solidarity with women and young girls in developing countries, hundreds of demonstrators gathered on Parliament Hill on March 6 before marching to City Hall during Ottawa’s second annual “Walk In Her Shoes” challenge.

The challenge was inspired by the fact that many women and girls in developing countries walk an average of 10,000 steps every day to collect basic necessities for their families, such as water for drinking, cooking and cleaning.

Sophie Grégoire Trudeau, the wife of Prime Minister Justin Trudeau and a supporter of the Ottawa-based humanitarian and development organization CARE Canada, addressed the crowd and said that more work needs to be done to make opportunities and equality more accessible to women across the world.

“Even though we don’t know these women who take 10,000 steps every day to get food, wood and water, they are our sisters,” said Grégoire Trudeau. “They are our mothers. They are human-beings that the advantaged are responsible for; the more disadvantaged.”

The “Walk In Her Shoes” challenge is a month-long, global fundraising initiative launched by Switzerland-based CARE International, which fights global poverty. CARE, which stands for Cooperative for Assistance and Relief Everywhere, began after the Second World War as a supplier of “CARE packages” of food and other basic supplies to European citizens displaced during the conflict.

Canada was one of many countries taking part in the challenge, with cities such as Vancouver, Calgary and Edmonton also hosting marches throughout the month.

“If we can march for women — if we can do that and we can walk in solidarity to help break the cycle of poverty for women and children — I would like to do that. It’s all about marching in solidarity and for women,” Findlay said.

Findlay said that she ultimately hopes that this initiative will help bring more equal rights to everyone.

Jessie Thomson, an organizer of the event, said that this year’s march is part of the broader discussion surrounding gender equality.

“In light of everything that’s going on in the world — talking about gender equality, talking about the ‘Me Too’ movement — just really raising awareness that this fight for gender equality is global and we all have a role to play in taking part in that fight,” Thomson said.

“We really want to be part of that discussion,” he said. “We want to raise the voices of people in Canada and also highlight the stories of people abroad that don’t always get a chance to speak out or be a part of that conversation.”

With the help of 27 fundraising teams and multiple event sponsors, Ottawa raised more than $14,000. All proceeds are going towards the fight against malnutrition in countries in Southern Africa.

“It’s an awareness that we can come together and make a difference. Everyday we’re making differences in our own lives. We’re providing opportunities for our own children and our families and we’re working hard towards that. If we could just give a little piece of that to someone else, I think that’s what I’d like,” Findlay said.

The very act of marching, Findlay added, is enough to shape the discussion around global poverty and gender inequality.