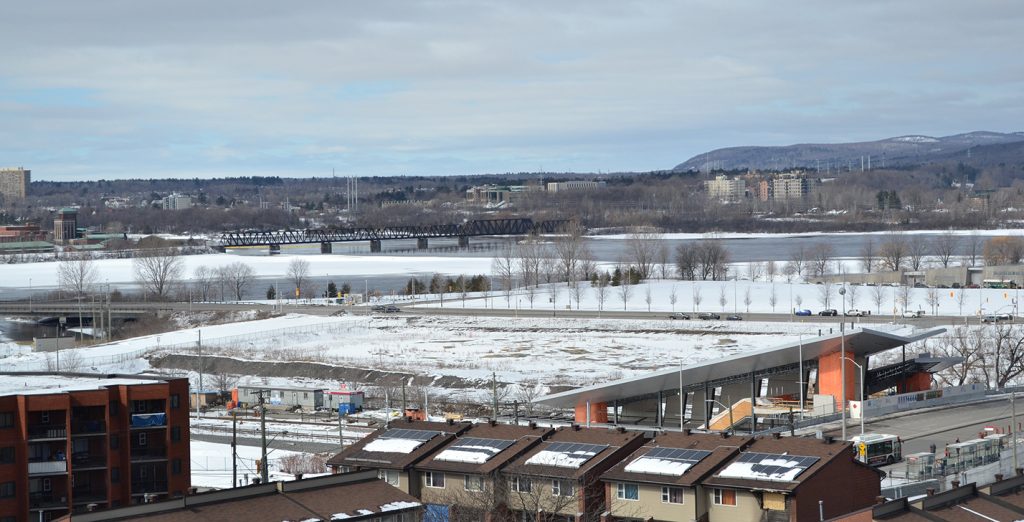 The vacant land south and west of the Canadian War Museum, controlled by the NCC, is slated to be developed by the RendezVous LeBreton Group, including the Ottawa Senators. Photo: Meaghan Richens, Centretown News
March 13, 2018

The National Capital Commission’s recent “milestone” announcement that the long-awaited LeBreton Flats redevelopment had taken a significant step forward came with a caveat: that even as the federal agency works to advance the tentative deal struck with real estate consortium RendezVous LeBreton — including the Ottawa Senators — the NCC will also “continue to consult with the Algonquin Nation” before finalizing the project.

January’s agreement-in-principle is seen as a major step forward in the creation of a huge, new commercial-residential community on the Flats, but the NCC has acknowledged that there are still many “hurdles” to overcome.

The NCC has agreed in principle to allow the development of a huge swath of LeBreton Flats by RendezVous LeBreton — including the Senators organization, which plans to build a new NHL stadium at the centre of the site to the south and west of the Canadian War Museum. But as the NCC stated in its Jan. 25 announcement of the deal, it is pursuing talks with local Algonquin leaders about their communities’ “participation in this redevelopment project.”

One of the Algonquin groups involved is Kitigan Zibi Anishinabeg – an Indigenous community near Maniwaki, about 130 km north of Ottawa on the Quebec side.

Chief Jean Guy Whiteduck, on behalf of Kitigan Zibi, filed an aboriginal title claim in the Ontario Superior Court of Justice against the NCC and the governments of Ontario and Canada in 2016.

He said the decision to initiate the court action was made during negotiations with the NCC on Windmill Development Group’s ZIBI project – the planned Chaudière Islands community in Centretown that’s adjacent to LeBreton Flats and particularly controversial with the Algonquin people.

“At the time the NCC was meeting with the Algonquins, but we didn’t feel that they took us serious in the sense that there’s title there,” Whiteduck said. “It’s our land. We should be able to benefit economically from potential development of those lands.”

The case has since been put on hold while negotiations continue.

The NCC was not willing to comment on the current negotiation process, and said in an email response that it was a matter to be discussed with the federal Department of Crown-Indigenous Relations and Northern Affairs Canada.

CIRNAC did not immediately respond to a request for comment.

The NCC has stated that discussions with Ottawa-area Algonquin people have been ongoing since 2016.

These negotiations are not the only land claims enveloping the LeBreton Flats area. A separate group under the umbrella of the Algonquins of Ontario  (AOO) are also in talks with the governments of Canada and Ontario over land claims that include the proposed development area.

The AOO consists of 10 communities in Ontario, including the Algonquins of Pikwakanagan First Nation, located at Golden Lake, about 100 km west of Ottawa near the town of Eganville.

In 2016, the AOO signed its own agreement-in-principle with the provincial and federal governments. This included the transfer of certain pockets of lands to the AOO, as well as $300 million in compensation for the group extinguishing claims over other lands — including LeBreton Flats.

Kirby Whiteduck , chief of Pikwakanagan, was skeptical Ontario and Canada would ever truly recognize the Algonquin’s claim to ownership of the land, so he felt negotiating with the governments was better than waiting for a miracle “to fall out of the sky.”

“You got a bird in the hand . . . and then you got two birds in the bush that you’re not sure you’re ever going to get,” he said, implying it’s better to get something than risk getting nothing. “We’re negotiating for some land, some resources and some compensation.”

He stressed the agreement-in-principle is not binding, negotiations are a long process with many roadblocks and the AOO will continue to push for the best deal they can get.

Jean Guy Whiteduck said his team is not part of the agreement with the AOO, and that the Kitigan Zibi community opposes that deal because they see it as giving up their rights to land that was originally occupied by the ancestors of present-day Algonquins from both Ontario and Quebec.

“If the Algonquins of Ontario want to do that, do it, but don’t forget one thing: We have rights there, too,” he said.

Jean-Guy Whiteduck said the AOO can give up their claims to the land — though he called the deal “ridiculous” — but they don’t have the authority to surrender the claims of Algonquins on the Quebec side of the border.

He said, in addition to Kitigan Zibi, there are eight other Algonquin nations living on the north side of the Ottawa River watershed in Quebec.

“The objective is for us to lead the process with the government negotiations, and the door is open to all the other Algonquin communities who want to come on-board.”

He said he would like the people of Ottawa to understand although there is unceded aboriginal title over lands in the national capital, it should not affect ordinary citizens living in the city, and that the issue has to be resolved at the government level.

Construction of the $5 billion project could start as soon as 2019. Aside from the new Sens arena, the development area will contain new residential communities with approximately 4,000 housing units, the new LRT Pimisi Station on Booth Street, public parks and commercial areas, and the highly anticipated Abilities Centre – expected to be the largest recreation centre in the Ottawa region.

Jean Guy Whiteduck said the legal action against the LeBreton development will only be resumed if a settlement can’t be reached in the next 16 months or so.