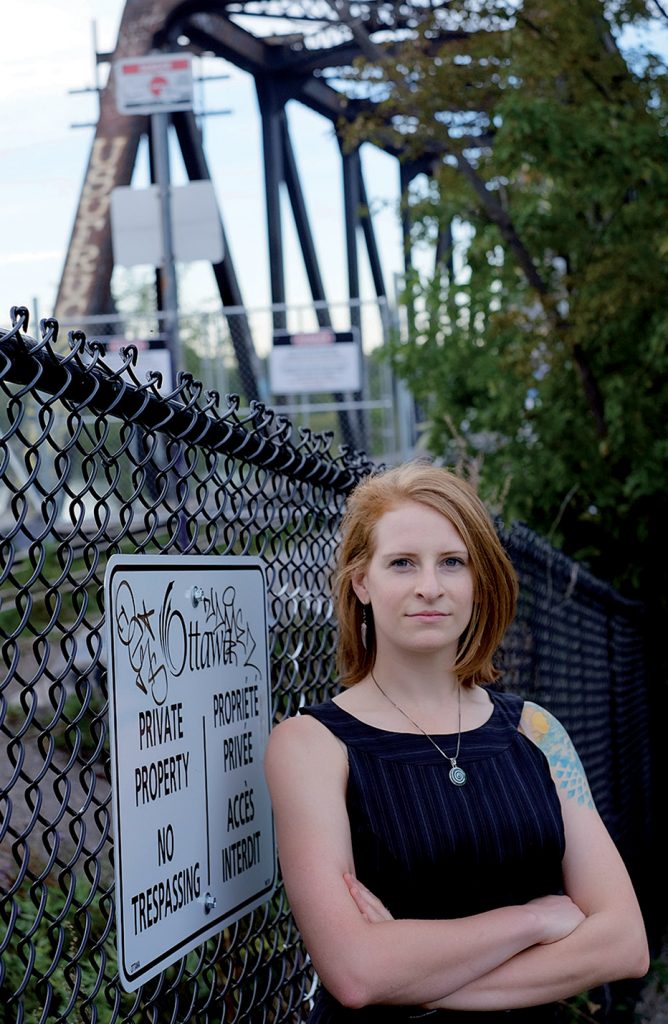 The abandoned Prince of Wales bridge could be repurposed as a light rail connection, a bike path and a walkway across the Ottawa River. Aileen Duncan is the founder of the Ottawa Rail Bridge Project, which has been dedicated to conserving the bridge. Photo: Jolson Lim, Centretown News
March 13, 2018

A recent ruling by the Canadian Transportation Agency has forced the City of Ottawa to scramble into action to determine the future of the long-neglected Prince of Wales Bridge.

The Feb. 16 CTA ruling stated that the City of Ottawa is legally responsible to either begin to restore the bridge — currently in a state of disuse and fenced off from the public — shut it down permanently or sell it.

The ruling stipulated that the city must decide what to do before April 28, and that it would have  12 months after that date to complete whatever plan it moves forward with.

In early March, however, Ottawa Mayor Jim Watson sent a letter to federal Transport Minister Marc Garneau asking him to quash the CTA ruling in order to give the City of Ottawa more time to negotiate long-term plans for a possible commuter rail link with the City of Gatineau.

At the same time, the City of Ottawa is seeking millions of dollars in federal funding for the refurbishment of the 138-year-old bridge.

“You can certainly appreciate the City’s surprise and disappointment in being asked to make this unfortunate ‘either or’ determination at this point in time,” Watson wrote to Garneau, asking for a reprieve from the CTA deadline in order to continue negotiations with Gatineau on the possible commuter link.

Joseph Potvin, director general of transit development company Moose Consortium, said the private businesses that form the group have a plan to refurbish the bridge as an extension of the existing O-Train Trillium Line, and to build a cycling path and a pedestrian walkway along the sides of the bridge.

The north-south Trillium Line currently stops at Bayview Station, only about 300 metres from where the bridge reaches Ottawa’s shore between Mechanicsville and LeBreton Flats, just north of the Bayview Road overpass.

In 2009, the City of Ottawa removed a section of track connecting the bridge to the Trillium tracks to make way for construction projects.

“The City had to do something,” Potvin said. “The City was legally obliged to maintain the integrity of the main line railway right across onto the bridge.”

Moose Consortium has been pressing for better rail transit in Ottawa for years. The consortium said its ultimate goal is to bring reliable rail transit to places just outside of the city, such as Arnprior and Smiths Falls.

Potvin said Moose is prepared to fully finance the refurbishing of the Prince of Wales Bridge in exchange for rights to run its own trains to those outlying areas. He estimates the project would cost $40-50 million.

Potvin said Moose would seek funding from the City of Ottawa for the added cost of reconnecting the missing section of track at Bayview, which he estimated will cost another $20-25 million.

Trevor Haché, vice-president of the Healthy Transportation Coalition, said he supports the repurposing of the bridge. “If there was a public transit link, it would be a great help to many thousands of people on a daily basis,” he said.

Haché said he hopes to see both cities prioritize low-income housing along the tracks.

“With all this money being invested in the light rail transit system, we want to make sure that people who have low incomes are able to live close to those rapid transit stations so it’s not just the wealthy that benefit from having rapid transit close by,” Haché said.

Haché also supports the inclusion of a bicycle path and walkway on the bridge.

“If it were made into a pedestrian and cycling bridge, I’m sure hundreds if not thousands more people would use it to make their commute nice or to have some nice recreational trails.”

Aileen Duncan, founder of the Ottawa Rail Bridge Project, a group dedicated to conserving the bridge, said she also supports the repurposing project. As a cyclist, she said a bike path would open up an important connection between the network of bike paths on both sides of the river.

In 2016, Duncan launched a Change.org petition to retain public access to the bridge as a scenic lookout after the city — citing safety and liability issues — announced it would be installing fences to block people from using the structure.

Duncan said her petition, which gained nearly 2,000 supporters, showed there is interest in the community in saving the bridge and putting it to good use.

She said she has faith in the city to do what’s in the best interest of the community.

“I think that the support is there from the community and it’ll take a strong leader to pull this off,” she said. “I think our city council is up to the challenge.”