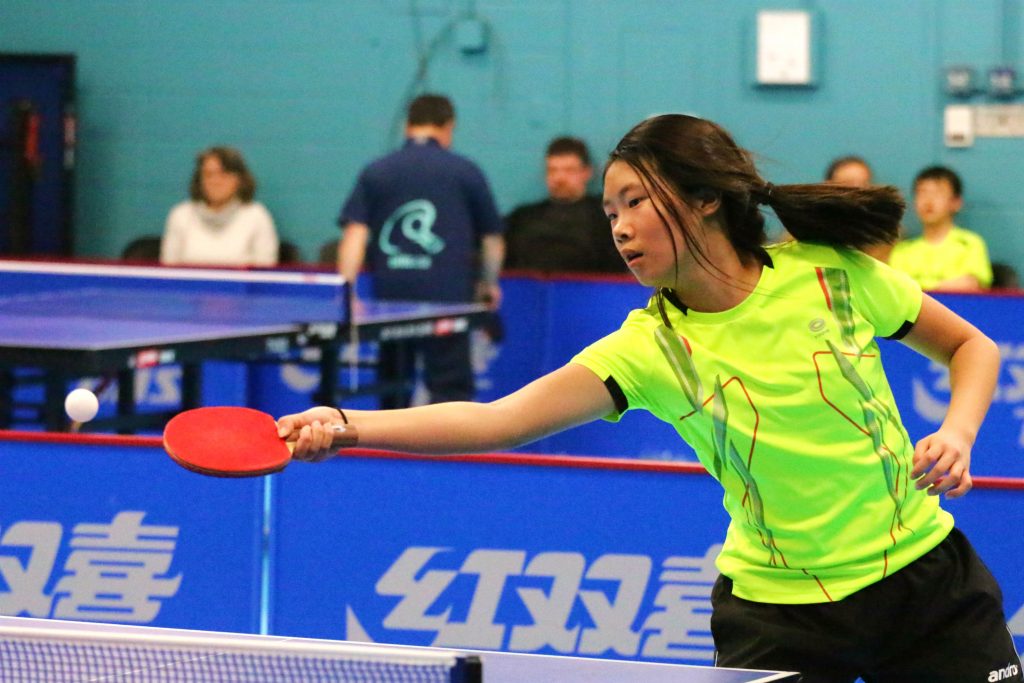 “I would say it’s a huge success,” said Michel Legault, co-owner of the club on Louisa Street in Centretown, just west of Bronson Avenue and south of Gladstone. “It’s gone without a glitch. Everybody had fun.”

The year-old club’s tournament featured individual competitions on the first day, when 46 players from the Ottawa-Gatineau region — split into three divisions — vied for ping pong glory.

On the second day, 16 teams of two competed in ‘A’ and ‘B’ divisions in the team portion of the tournament.

In the advanced division, Terry Allaire triumphed over Maggie Jin to capture the final gold of the day.

On Day 2, Fatikow returned with partner Remi Kraemer to capture his second medal – a hard-fought, down-to-the-wire gold – in the ‘B’ team event. Jin also upped her medal count to two alongside newcomer Wei Liu, a university student from China, with a 4-0 sweep for the Division ‘A’ title.

Jin, a 13-year-old player training out of Ottawa’s Geng Table Tennis Academy, said her two-medal performance is just another step toward her goal of one day playing for Team Canada at the Olympics.

Jin was named to Team Canada’s cadet team earlier this season, but said despite her latest tournament hardware, she still needs to improve.

“It wasn’t bad,” she said of her performance. “Some mistakes were not necessary, but I think I played alright.”

Jin said the sport has grown into a passion in the four years since she first picked up a paddle. “It’s an individual sport and it really needs good mentality,” she said. “It really helps with your emotions and how to control them.”

Jin said that with school work and training picking up, it’s getting more difficult to find time to practice, but she is committed to both.

Stéphane Charbonneau, a former top-10 Canadian player and current coach at the OTTC, said Ottawa needs more young players like Jin who are dedicated to the sport for this city to match the skill levels seen in Toronto or Montreal.

“We need more space and we need a bigger club, but we need people to play,” Charbonneau said. “If we’re opening a bigger club with a lot of space, I think we will get better and probably have more coaching coming up to that building. And hopefully we’ll have more kids – kids are important.”

Legault said he has plans to continue gaining exposure for the club by holding four sanctioned tournaments every year, at least one of which will be open to all skill levels, including some who among the top-ranked players in Canada.

“We have planned to really organize the sport and bring excellence to it in Ottawa,” said Legault.

He said since the club’s opening last year, the improvements he’s seen among local players is proof that the future is bright for table tennis in Ottawa.