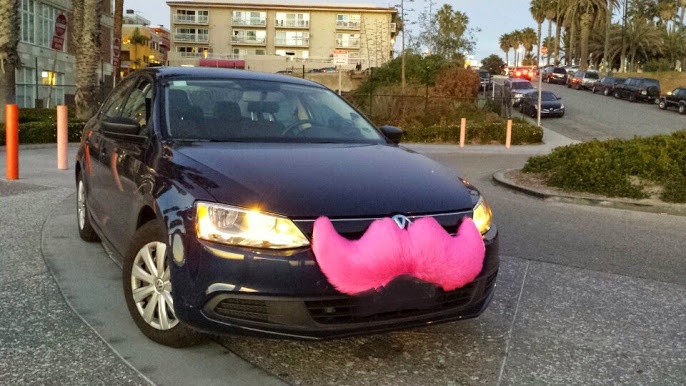 Ottawa will be the second Canadian city to witness the arrival of Uber rival Lyft. The ridesharing service initially branded itself with a playful pink mustache. Photo: Wikimedia Commons
March 13, 2018

The imminent arrival in Ottawa of Uber rival Lyft has sustainable transportation advocates raising concerns about the environmental cost of ride-sharing services.

Lyft, a service that allows users to request a ride via an app on their phone, has announced that it is coming to Ottawa in the next few weeks

“Our launch in Toronto went extremely well, and we have learned a lot. We’re excited to bring Lyft to Canada’s capital in the coming weeks,” Lyft Canada’s managing director, Aaron Zifkin, said in an email.

However, the increase in popularity of these services is leading to more pollution and busy streets becoming even more congested due to an influx of cars, said Trevor Haché, vice-president of the Healthy Transportation Coalition in Ottawa.

“Ride-hailing companies are trying to market themselves as the solution to urban congestion problems but they’re actually creating more problems than they’re solving at the moment,” he said.

According to a 2017 study by the Institute of Transportation Studies at the University of California, the growing popularity of ride-hailing services is contributing to the increase in vehicle miles traveled in major cities. And with more cars on the road for longer stretches of time, more CO2 emissions are reaching the atmosphere.

“When there’s more congestion on our streets there’s more idling of those vehicles that are running less efficiently and that leads to more greenhouse gas pollution,” said Haché.

David Hugill, a professor of geography and environmental studies at Carleton University, said one reason people prefer rideshare services over public transit is due to their reliability – a general indictment of the quality of mass transit service.

“My vision of a good city is one that has affordable, effective public transportation that is comprehensive in its service and has the capacity to get people around wherever they need to go typically at all hours of the day,” said Hugill. “Unfortunately, in North America, we don’t have anything close to that.”

Ride-sharing services such as Lyft and Uber run off a smartphone app through which users can request a ride from their current location.

The California study also found that ride-sharing services draw people away from transit and light rail services. The most popular answer respondents provided was that public transit services are too slow.

The planned completion of the second phase of the LRT system will give Ottawa a total of 60 kilometres of rail and 41 stations.

Haché said the new LRT system, now set to be operation in November, is a positive step towards improving public transportation.

“With the addition of light rail later this year and the completion of Phase 2 of light rail in 2023, we’ll have a really good electric public transit system that will reduce the amount of greenhouse gas pollution currently being caused by all the buses in Ottawa which run on diesel fuel.”

Hugill said that in order for the city to dramatically improve public transportation, all level of government need to prioritize this issue and invest more time and money into transit services.

“I think we need to get really serious about building dense cities that are well served by comprehensive public transportation services,” said Hugill. “And Lyft and Uber are not the answer to that problem.”