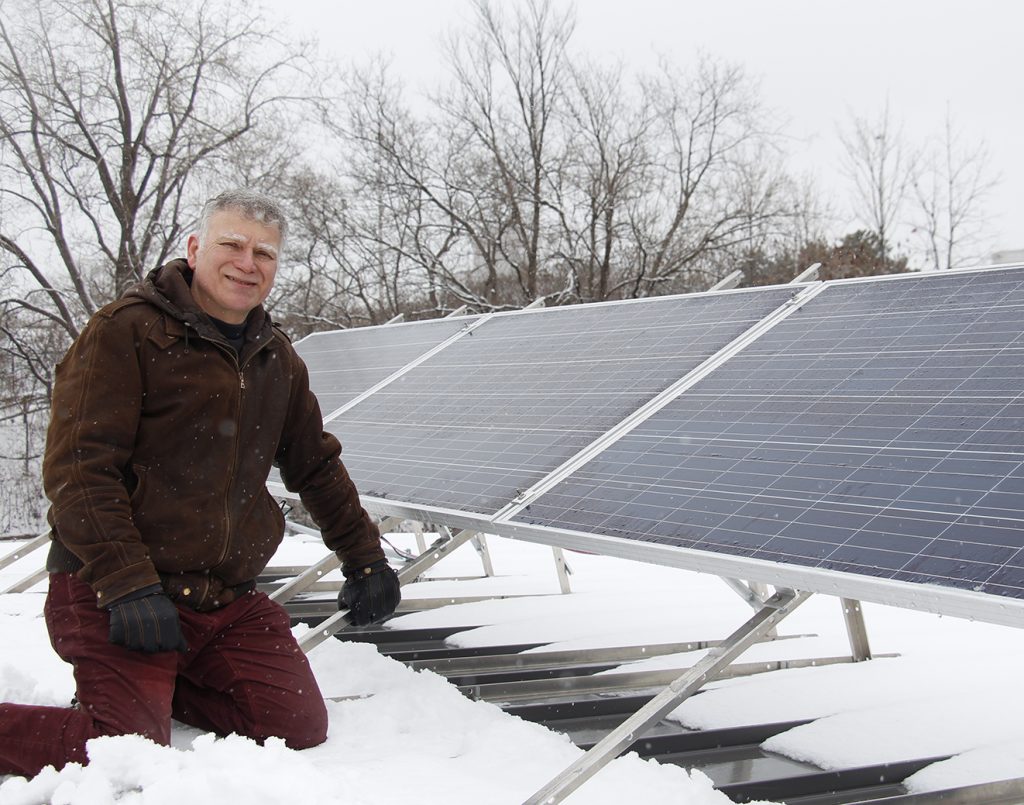 Roger Colbeck, director of the Ottawa River Runners Association, is all smiles next to the solar panels that power the canoe/kayak group's clubhouse. Photo: Saskia Rodenburg, Centretown News
March 15, 2018

With spring around the corner, the Ottawa River Runners will soon get a  chance to show off their new solar-powered clubhouse during the upcoming kayak-canoe season on the whitewater tailrace at LeBreton Flats.

Opened last August just in time for the canoe/kayak national championships, the ORR’s Pumphouse Whitewater Facility will be put to full-season use for the first time this year.

The clubhouse’s 1.04 kilowatt solar-panel roof was funded in part by Bullfrog Power, a green energy provider that specializes in carbon-reduction systems for businesses and individuals across Canada.

The ORR project was chosen to receive a $10,000 grant as a part Bullfrog’s community renewable projects program. Meanwhile, the River Runners themselves covered the extra couple thousand dollars for the installation.

Bullfrog has offices in five cities across Canada, including one in downtown Ottawa on Gilmour Street.

For Dave Borins, manager of Bullfrog’s renewable projects program, it was an easy choice to support the ORR because of the club’s direct link to the environment.

“They improve people’s skillset and help get them outdoors, and that has an effect of making people more in tune with nature and therefore they’d maybe want to preserve it,” said Borins.

With the new solar-powered roof in place, the clubhouse will have to rely less on a diesel generator to power the facility. Borins notes that this is one of the strongest advantages of going with solar power.

“The biggest tangible benefit is that they don’t need a diesel generator, or use a smaller one if need be,” said Borins. “But replacing diesel — that’s a plus.”

The new clubhouse won’t need to consume much energy during the upcoming whitewater season, according to River Runners director Roger Colbeck. All that will need to be powered is the indoor LED lights, computer timing equipment during races and the security system.

As for the new building itself, Colbeck said the overall Pumphouse facility is a real draw, and he’s excited that it will be put to use for its first full season this year.

“I think we’ll be even more successful now that we have the clubhouse and the solar-powered location,” said Colbeck.

The clubhouse is located along an old shoreline in an industrial area in Lebreton Flats. An offshoot of the Ottawa River flows into their Pumphouse facility in a rapid manner, making it the ideal location for slalom whitewater training.

He expects competitive paddlers to start getting back in the water later this month, but for inexperienced paddlers he anticipates they won’t get their start until May when the water isn’t as frigid.

“It’s more visible with the solar panels up there,” said Colbeck. “People will say, ‘Oh this is pretty great,’ which goes along with the sport, being outdoors in the water and nature.”

Bullfrog Power, which has done work in the Ottawa region before with Just Food Farm, says the ORR’s solar-powered roof is a symbol of environmental progress.

“It demonstrates their value, and because it’s so close to the capital, they’re going to have this iconic building that will generate a lot of traffic and bigger programs,” said Borins.

The clubhouse itself cost the ORR around $300,000 to build, but it was partially funded by a Trillium grant of $150,000, along with sponsorships from their members.

Colbeck said he also expects the ORR to host 80 children during the club’s annual summer camps. The solar installation means they’ll be able to power laptops and projectors despite being off the local power grid.