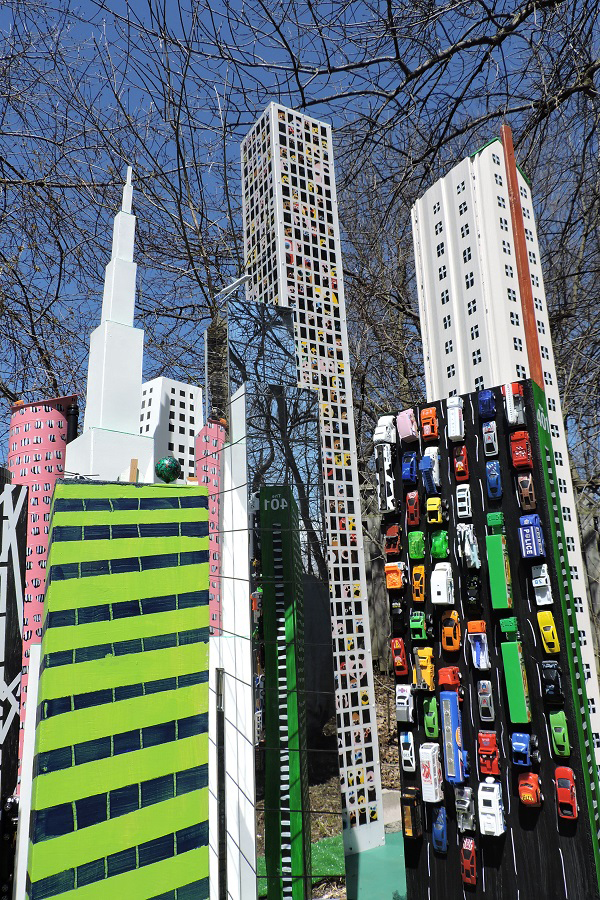 A satirical artist plans to poke fun at city planning in an upcoming exhibit at City Hall.

René Price will present his vision of a tongue-in-cheek “utopian” city called “OTTOWA” through an interactive art-game installation called “The Art of City Building,” opening in July at the Karsh-Masson Gallery.

“In actuality, that’s an ironic statement, as it’s a dystopia” Price said in an interview. “It’s a game about how silly the process is of planning our cities.”

Describing himself as a “semi-retired” exhibition designer for Parks Canada, Price said the name OTTOWA derives from a baseball cap given to him by his sister. Ottawa was misspelled on the hat’s crown.

This planted the seed for Price’s parallel-universe idea, which grew into his installation The Art of City Building — a model city that incorporates his takes on zoning, Ontario Municipal Board permits, and a slew of other arcane processes related to city planning.

Price used stacked building blocks to express his view of how planning and development occurs and how “the planners have to play along with it or object to it, and we’re all just playing like little kids with our blocks, you know.”

OTTOWA contains models made of mixed media, mostly wood and paint, said Price. “You’ll barely be able to walk around the outside of the space” once it’s installed in July.

According to Ian Miller, media relations officer for the City of Ottawa, said submissions to present a show at the Karsh-Masson Gallery are reviewed by a peer-assessment committee based on a set of criteria that includes “artistic merit and professionalism, regional importance and innovation, quality and cohesiveness of the artwork examples and the written proposal statement, and appropriateness of the proposal to the public nature of gallery spaces.”

Price, who said he’s pleased the gallery has chosen to showcase his installation, likened its presence to having a fox in the henhouse.

Its a presence Alain Miguelez, program manager of community planning at the City of Ottawa, plans to keep in mind as he takes in the exhibit.

“I love any humorous attempt to issue commentary on the world we live in,” he said. “Anything that makes light or makes fun of some aspect around us I think is welcome.”

Though appreciative of Price’s attempt at making light of city planning, the stages of planning Miguelez outlined highlighted the complexity unique to each project.

“When you work in city-building, you realize there’s quirks and unique circumstances with each project, each proposal, each file that you touch,” he said.

In Ontario, municipalities develop official plans that must be approved by the Ontario Municipal Board and are reviewed every five years.

However, Miguelez said, “The life-cycle of a plan from start to finish can be in excess of five years,” and starts with examining the city and deciding on particular areas needing change.

“It’s like a funnel. You start from the big picture and then you kind of funnel down to each site or property,” he said.

Miguelez said city planners are “committed to being as efficient and expeditious as possible, but sometimes there’s nothing you can do about situations that are more complex you need to sort out.”

As far as Price’s plans for OTTOWA go, he’s got the same goal he had from a past project – a full-sized pyramid-shaped suburban house in Cornwall.

“If it gives them their chuckle along the way to work in the morning as they pass by, that’s the best I’m likely to get out of this thing,” said Price. “That’s what I would want.”

Price’s exhibit will be on display from July 12 to Sep. 4.