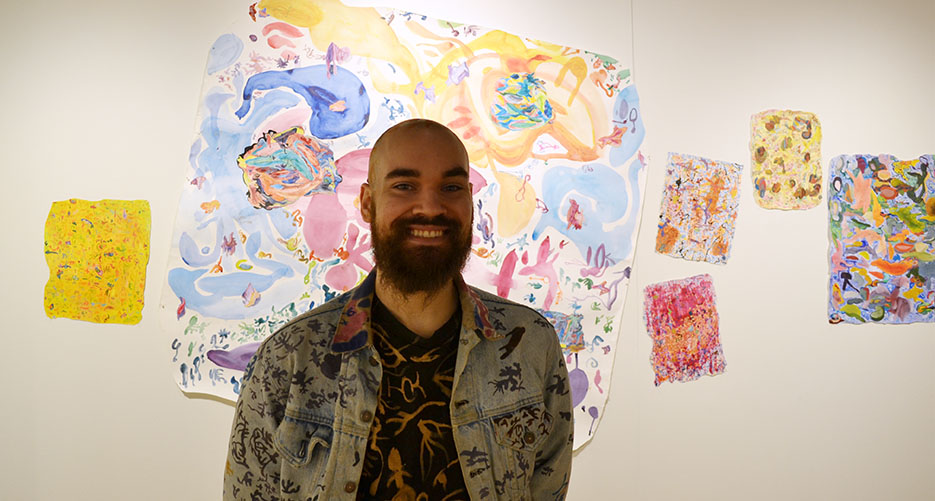 Artist Jordan Seal's new exhibition 'Wealth of the Eternal Garden,' opened at City Hall Art Gallery on March 22 and runs until May 23. Seal's colorful, abstract work is an interpretation of the Garden of Eden. Photo by: Meaghan Richens, Centretown News.
March 27, 2018

Local artist Jordan Seal’s exhibition Wealth of the Eternal Garden is on display at the City Hall Art Gallery until May 23.

The exhibition features 116 paintings and a collection of sculptures using mixed-medium materials such as acrylic, ethyl alcohol, watercolour and wax. Seal describes his creative approach as a spiritual journey of abstract expression.

He places the sculptures in the middle of the gallery as a centrepiece to anchor the show.

“They are like a bed of flowers to welcome and uplift viewers,” Seal said. “It’s a piece of my visual landscape manifested in 3D to make all that I’ve done concrete.”

Paintings were swung around to hang on the wall instead of the conventional way that parallels to the ground line. Seal explained he hangs the pieces this way because he wants them to “seem alive, growing, and in motion” as they connect to one another as part of a garden of art.

Wealth of the Eternal Garden is described as a reflection of the artist’s search for “the eternal principles of something that is only existing for a brief time.” The overgrown garden bustling with plants and insects introduces a secret world to Seal’s audience.

Seal described this as a “DIY” ethic — do it yourself. He said he wants to have control of his own artwork. For example, Seal’s paintings have no frame. He said things should not to be squared and artificial.

“It’s about doing things in my own way, even though it’s often the hardest way,” said Seal. “I believe in having as much control in what I do as I can, and to making it accessible (and) involved in the community, as opposed to making it involved in business and other larger establishments.”

Many of his paintings contain symbols, but Seal said they are simplified drawings that are meant to be like insects, bacteria and cellar structures inside the alternative world he’s created.

“I find the art needs a push and pull between the simple and complex, micro and macro, a flat subatomic reality and a breathing reality,” he said.

Seal, 30, was raised in Ottawa and is a 2011 graduate of the Ottawa School of Art’s three-year fine arts diploma program. Andrew Fay, the program coordinator, said Seal’s illustrations of tiny symbols “all come together to make really big artworks.”

“It is meditative when you are viewing,” said Fay.

The artist applies abstract and surrealistic styles to convey a sense of spirituality that runs through nature. It’s all part of the garden of life in which everything is floating, said Seal.

This exhibition showcases Seal’s ability as a painter, but he is also skilled in poetry, calligraphy and music.

“I see them all as the same discipline, and they feed each another,” he said.

Unlike most other galleries that have a curator who organizes the show, at the City Hall Art Gallery artists can propose a project to a peer assessment committee to present their own work.

This year, the committee selected a number of artworks by emerging artists.

“I know they are certainly keen on supporting Jordan, even at this early stage of his career,” noted Haughian. “They were attracted by the sensibility of his works and his unique way of art making.”

Fay said Seal’s exhibition at the gallery will be an inspiration to other students. People will look at what he has accomplished, apply to put on shows similar to what Seal has done, and move their own careers forward.