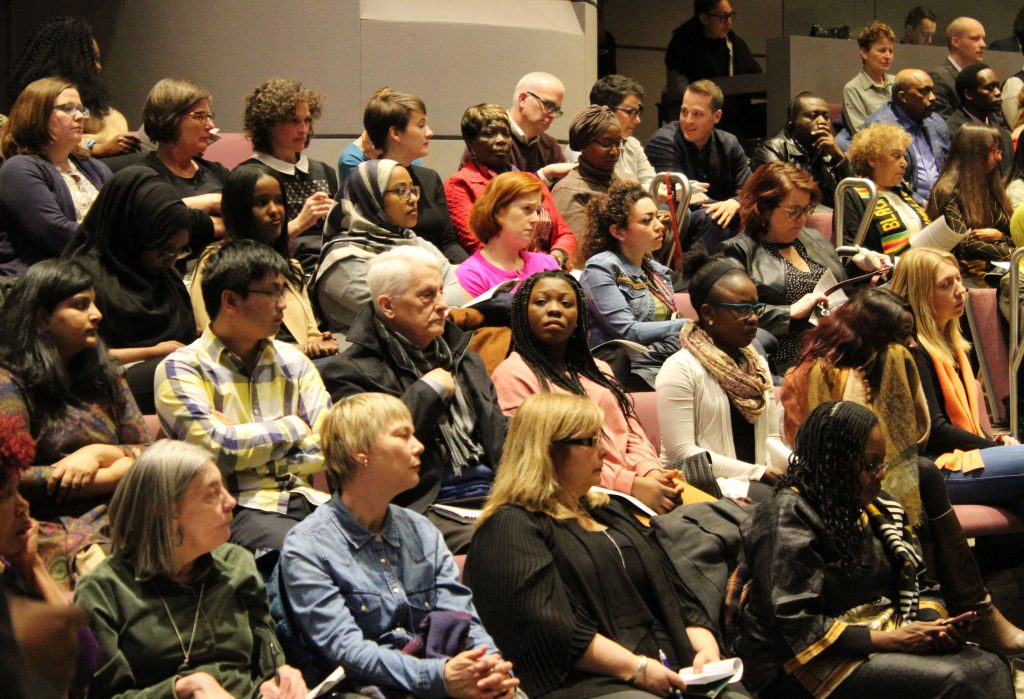 Hundreds of people gather at City Hall on March 21 for a town hall meeting addressing anti-black racism. Panelists from public institutions were asked to discuss progress being made to fight racism in the city following a report released last year. Photo by: Nicole Babb, Centretown News.
March 27, 2018

Members of Ottawa’s black community sat down face-to-face at a town hall March 21 with representatives of the very institutions called out for perpetuating anti-black racism.

More than 250 people packed City Hall as leaders of some of Ottawa’s key institutions pledged to do more, following a 2017 report addressing anti-black racism in the city.

Last year, organizing groups Ottawa Local Immigration Partnership and the City for All Women Initiative produced the report, outlining the specific systemic exclusion and discrimination the black community faces within the school and justice systems, and when accessing police as well as social and mental health services.

The report was released following growing concern about racism in Ottawa after the July 2016 death of 37-year-old Abdirahman Abdi in police custody.

“Anti-black racism is real. The unique experience of black people as a collective is real,” said OLIP director Hindia Mohamoud.

As someone who works with key city institutions on a daily basis, she said she knows they are making an effort, but oftentimes there is no platform for them to consult with the community in a meaningful way.

“This town hall is intending to mend that gap,” Mohamoud said.

This year, the public gathered to discuss the progress city institutions have made and the actions yet to be taken since the report.

Ottawa Police chief Charles Bordeleau was among those representing institutions on the panel. He said the force is working to address the community’s concerns.

“Racism does exist in society, it can exist in policing and it has no place in either,” Bordeleau told the crowd.

Farhia Ahmed, co-chair of the Justice for Abdirahman Coalition, welcomed the chief’s  acknowledgement that racism exists in the institution.

“This is the first time I’ve heard him say that publicly and I think that that’s a big step forward,” Ahmed said.

She said it is a pivotal moment in time for the city. According to Ahmed, there has been significant progress made to combat anti-black racism in Ottawa since last year’s report was released.

This time last year, Ontario released a three-year anti-racism strategy urging institutions to collect race-based data and improve their frameworks. In addition to this, the Safer Ontario Act, enforcing stronger oversight of policing in Ontario, was made law earlier this month. The Justice for Abdirahman Coalition was concerned the bill would be watered down and spent almost two years lobbying for the tighter legislation passed on March 8.

Ottawa Police Services recently established an equity and diversity inclusion office, enforced training on bias-neutral policing and will be reviewing the anti-racial profiling policy. The force is also launching a diversity audit this year to ensure bias-neutral hiring practices.

Ahmed said the police force has made notable progress.

According to Ahmed, there is more work to be done, but progress will only be made when institutions begin to hold themselves accountable.

“I think that up until now what we’ve seen is very aspirational commitments. To turn those into real results, we need accountability,” Ahmed said.

Still, she urged more of the community to pitch in.

“I think that it’s wonderful that we see a full room this evening, but people need to show up in numbers, not just to town halls,” Ahmed said.

Ahmed said the town hall was a learning opportunity for many and is hopeful the community will be more involved in keeping institutions accountable.