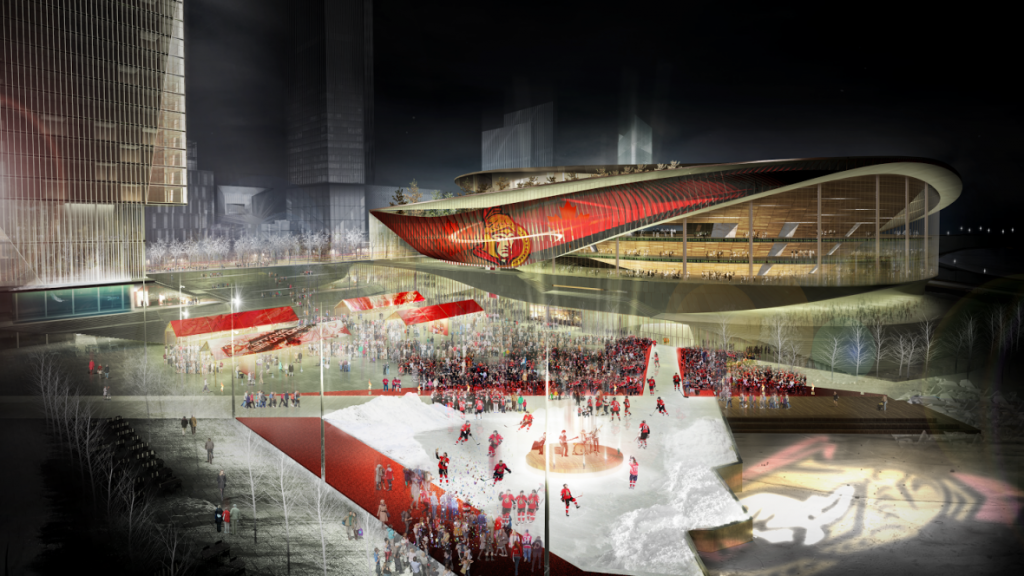 Former Ottawa major Jim Durrell says he thinks the next big step for the Senators is the move to a new stadium at LeBreton Flats. Photos provided by RendezVous LeBreton.
March 27, 2018

One of the most influential figures in Ottawa’s recent sports history is finally getting his time to shine.

He’s not known for his skills on the playing field, but former Ottawa mayor Jim Durrell’s work behind the scenes was more than enough to make him one of the new inductees into the Ottawa Sports Hall of Fame.

Durrell, 71, who now owns the Capital Dodge dealership in Kanata, headed Ottawa city council from 1980 to 1991. He was a key player who helped bring professional hockey and baseball to the nation’s capital, along with the return of pro football after the demise of the Ottawa Rough Riders.

Once referred to as Ottawa’s last mega-project mayor, Durrell’s time at city hall was instrumental in securing the NHL Senators franchise for Ottawa in 1990 — more than 50 years after the city’s original Senators left town.

Durrell is also credited with helping to bring the Triple-A Ottawa Lynx baseball club to the city in the early 1990s — paving the way for its pro baseball successors — and attracting three Grey Cup championship games.

On June 1, during the Ottawa Sports Hall of Fame’s annual induction ceremony in the Horticultural Building at Lansdowne Park, the city will pay homage to the man who helped bring the pro sports world to Ottawa.

“I am truly honoured,” said Durrell. “For many years I’ve attended this function and watched some pretty outstanding people in Ottawa be honoured, so the fact that I’ll be included with them is pretty exciting.”

His most notable work was with the Senators. Durrell teamed with original owner Bruce Firestone and even travelled to Florida with a local fire department band to give a pitch to NHL executives that Canada’s capital deserved a franchise.

In December 1990, the NHL awarded one of two expansion franchises to Ottawa, with the other landing in Tampa Bay. Durrell served as president of the Senators after ending his time as Ottawa’s mayor in 1991.

But Durrell said it wasn’t just securing the Senators franchise that he’s proud of. For him,  the most important legacy is the impact that pro sports have had on the city as a whole.

“What sports do for a city is they elicit pride, they elicit emotions, they get everybody off their seats,” said Durrell.

When Durrell served as mayor he focused on what he called “the four pillars of a city”: education, healthcare, business and sports. What bothered him was that youth in Ottawa didn’t have hometown heroes to call their own.

“Now we’re back in a situation where kids walking along can see Daniel Alfredsson walking down the street or Erik Karlsson or Henry Burris and get excited about that,” said Durrell, referring to two Swedish superstars who’ve captained the Senators and the 2016 Grey Cup-winning quarterback of the Ottawa Redblacks.

For hall of fame board member Aldo Chiappa, the decision to induct Durrell was a no-brainer. He said Durrell recognized the economic development benefits that sports could bring to Ottawa and that his accomplishments were more than enough to earn entry into the pantheon of local sporting greats.

“He brought us baseball, football, hockey — the three major sports in Ottawa. That’s why we didn’t have any trouble at all inducting him,” said Chiappa.

However, Chiappa joked that the tribute to Durrell was based entirely on his contributions as a builder, not as a player: “He’s a tennis player, but he’s not getting in for his tennis skills — that’s for sure.”

Even though it has been almost three decades since Durrell helped make Ottawa a world-class sports city, he still continues to have an impact on sports within the city. He chaired the Ottawa Grey Cup Festival, which planned events the week prior to the 2017 Grey Cup.

As for the future of Ottawa sports, Durrell said he believes the next big step is moving the Senators to a new stadium at LeBreton Flats, as envisioned by the RendezVous LeBreton consortium — including the Ottawa Senators — that recently signed an agreement-in-principle with the NCC to develop the sprawling downtown property.

“The second you take your foot off the pedal, somebody else is going to put theirs on instead,” said Durrell. “I am still very happy with where we’re at and looking forward to the growth of LeBreton Flats, assuming that it comes to fruition.”