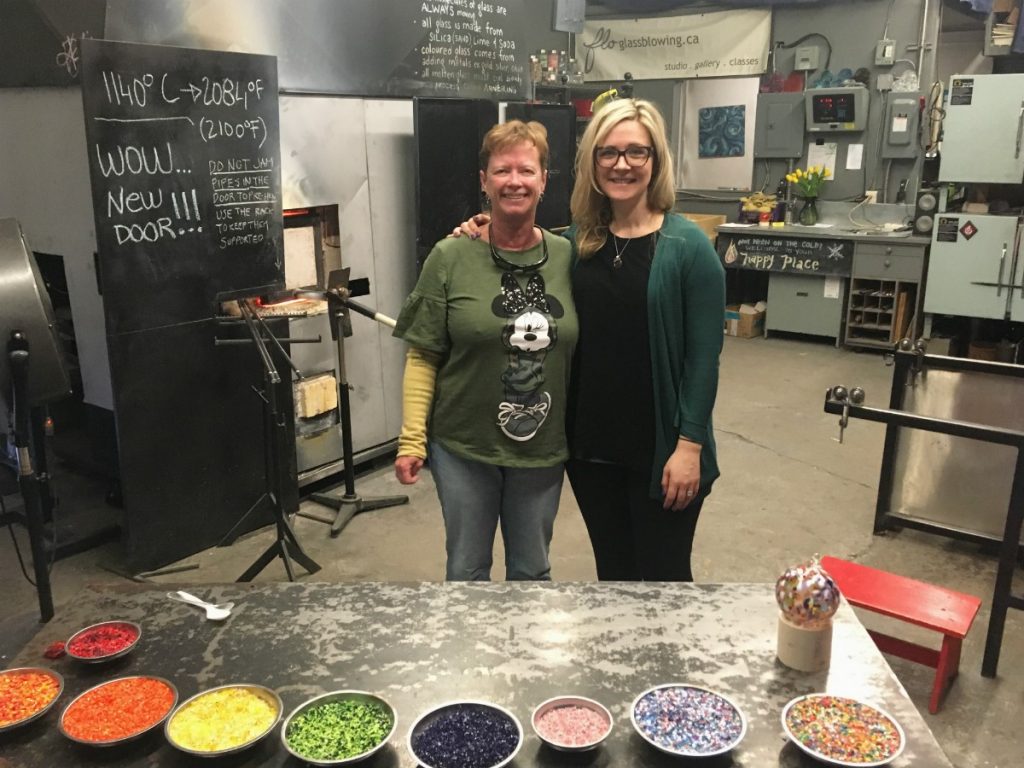 Marylou Miles (left) and Melody Jewitt get ready to run a workshop for families of kids with Down syndrome at Flo Glassblowing studio in Little Italy. Photo: Jackie Bastianon, Centretown News
March 27, 2018

Young children laughed and scurried excitedly around Flo Glassblowing studio in Little Italy, thrilled to help turn hot molten glass into rainbow coloured ornaments during a fundraising workshop for the families of children with Down syndrome.

Jodi Browne came to participate in the event on March 17 with her two young kids. “I’ve never done anything like this before, so this is really cool,” she said.

The children were asked to pick out a mix of stones that would decorate their creations.  They then watched in fascination as the owner of the studio, Melody Jewitt, used a long metal rod to meld the molten hot glass from the 4,000-degree-Fahrenheit oven with the small stones.

Participants were then asked to blow on the rod, which enlarged the glass at the other end into beautiful ornaments. The decorations were taken off the rod and placed into the freezer to set.

Everyone, regardless of their capability, was included in the crafting process. It was the studio’s seventh anniversary event, but it was the first year that proceeds went to the Canadian Down Syndrome Society.

Jewitt said she chose to support Down syndrome for a reason that’s deeply personal.

“I have a newborn boy at home who was born with Down syndrome, so I’m particularly passionate about raising funds and awareness for that cause,” she said.

The workshop drew a group of over 30 kids and adults who were in and out of the studio throughout the course of the morning.

Tina Crouse has a son with Down syndrome, and although he wasn’t able to attend, she came to participate for the both of them. Crouse said she was struck by how the workshop centered around the creation of art pieces.

“There’s no separation. Everyone takes part in their own way and creates their own expression, so that has no disability and no limitation because you’re just trying to do something that’s representative of yourself,” said Crouse. “I think that’s the coolest part about having fundraisers like this.”

Browne said she has seen the stigma around Down syndrome decrease over the last five to 10 years. But she still sees a need for awareness campaigns like the “Anything But Sorry” organized by the Canadian Down Syndrome Society in 2017. The campaign sought to explain why “sorry” is not an appropriate response to the parent of a child with Down syndrome.

“I think it’s bang on,” Browne said of the CDSS project.

“A lot of people told me they were sorry when I had my daughter,” said Browne. “That was the first thing I heard from my practitioner and it really sets the tone.”

Browne, Jewitt and Crouse’s children are far from alone. According to stats on the CDSS website, there more than 45,000 Canadians living with Down syndrome.

Jewitt said she hopes to reach a fundraising goal of $3,000, but the day was less about the numbers and more about increasing awareness around Down syndrome.

In the last seven months since her son Miles was born, Jewitt said she has found a receptive Down syndrome community here in Ottawa.

“I’ve tapped into this network of like-minded people who are just trying to make it more overall well received,” said Jewitt. “I’d love to do more to work towards the cause.”