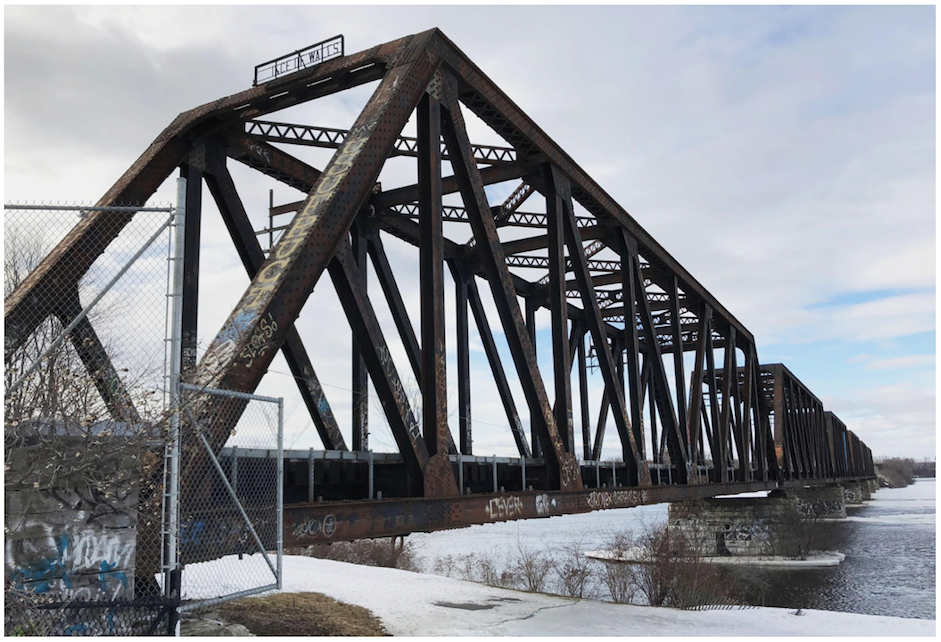 The Prince of Wales Bridge. A significant, historic figure in the city. Photo by: Samuel Berube, Centretown News.
March 27, 2018

The Prince of Wales Bridge opened for train traffic 137 years ago on Jan. 17, 1881, and was the first rail bridge linking Ottawa to Hull.

The bridge was named after the son of Queen Victoria, Albert the Prince of Wales, who would eventually become King Edward VII.

The prince was known to be adventurous and toured the world while he was a king-in-waiting — stopping in Ottawa in 1860 to lay the cornerstone of the Parliament Buildings about 20 years before the bridge bearing his name would be built.

At the time the Prince of Wales Bridge was built, rail travel was fast overcoming steamships as the preferred way to travel, said Andrew King, a local historian and blogger on the website Ottawa Rewind.

“Most people traveled to Montreal via steamship along the Ottawa River,” said King. “Once the railways took hold, the steamships fell out of favour and eventually completely stopped service.”

Ottawa had been a rail hub for about 20 years by the time the POW bridge was built, and it would be another 10 years before electric railcars were used as public transportation within the city.

Colin Churcher, an Ottawa rail historian who has written extensively about the Prince of Wales Bridge, had recounted its construction by the Quebec, Montreal Ottawa and Occidental Railway, a company owned by the Quebec government. The construction of the piers of the bridge cost $112,000 and the superstructure cost $200,000.

QMO&O owned the railway from Montreal to Hull and wanted the bridge built so it could connect with the Ottawa and Prescott Railway at the Broad Street Station located between present-day Booth and Preston streets on LeBreton Flats.

Around the same time, Canadian Pacific bought the POW bridge and all the connecting lines in the Ottawa area to form Canada’s first transcontinental railway — the CPR — that was critical to Confederation.

“The interesting thing about the bridge, it was a very long bridge,” said David Jeanes, president of Heritage Ottawa. Jeanes said it was a multiple span bridge and was, at the time of its construction, considered to be the longest continuous truss bridge in the world.

Churcher documented only one death occurring during the construction of the bridge. A worker was swept into the Ottawa River by extremely turbulent waters brought on by the spring thaw.

Construction was on-hold at the time of the incident because of “high dangerous waters.” The man fell into the river while trying to secure a tug boat, and went over the Chaudière Falls just downstream.

“It was a very, very dangerous waterfall,” Jeanes said. “Your chances of surviving if you were drifting over the falls were very small.”

Jeanes said he was surprised there weren’t more deaths during bridge construction because it was such a huge project and an incredibly dangerous place to work.

Churcher’s research revealed that tug boats and barges carrying material were used during construction of the bridge and that accidents would sometimes happen involving the vessels coming loose and going over the falls.

Churcher described one such incident, detailed in the Ottawa Citizen in December 1879, in which 35 men on a barge narrowly escaped going over the falls. The workers were saved from disaster in a heroic rescue by men in a rowboat.

Once completed, the POW bridge was in service for nearly 50 years before it was modernized in 1927 because it had become too weak for the heavier locomotives of the time. The renovations to the bridge cost $750,000.

More efficient rail lines replaced the old QMO&O tracks, and the last passenger train passed over the bridge on November 15, 1981, according to Churcher.

In 2003, noted Jeanes, the City of Ottawa bought the bridge and all local rail lines from CP Rail for the municipality’s future O-Train network.

“Canadian Pacific offered them a good deal on the bridge as well,” said Jeanes. “The bridge was of very little value to them…so Canadian Pacific sold the bridge to the city for $360,000 which was basically just the scrap value of the steel.”

Jeanes thought a point of interest in the deal was the fact that, due to the sale of the bridge, the City of Ottawa now owns a plot of land in Gatineau that leads up to the bridge.

At the time of the sale, Jeanes said, city inspectors found the bridge to be in good condition. But over the past 15 years, with little or no significant maintenance having been undertaken on the bridge, it has deteriorated.

Jeanes estimated that it would cost about $200 million to  bring the bridge up to modern-day standards.

However, he said the POW bridge would be beneficial to the future of light-rail transit in the national capital if the O-Train/LRT system was connected over the river to the old QMO&O lines and Gatineau’s Rapibus system.