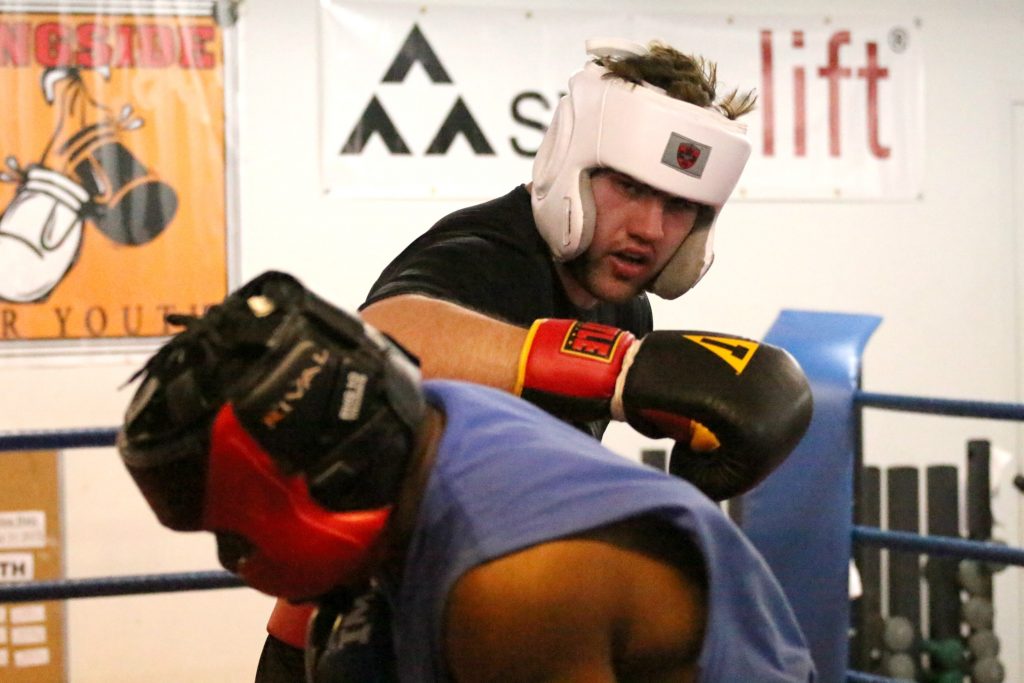 The reigning women’s heavyweight champion and two other competitors from Centretown’s Beaver Boxing Club are set to strap on their gloves at the Canadian national championships in Edmonton at the end of March.

The boxers — women’s titleholder Marija Curran, as well as Fabrice Thibeault Coulombe and Lucas Craston — range from featherweight (57 kg) to super heavyweight (91+ kg), from rookie to national champion, and from five-foot-seven to six-foot-six.

“We have a really interesting group of boxers attending nationals this year,” said Jill Perry, president of the Spruce Street club located in Little Italy, near Preston and Somerset.

National heavyweight (81 kg) champion Marija Curran is coming off gold and silver medals on the international stage and is set to defend her Canadian title.

Perry, Curran’s primary coach, said it’s the 30-year-old boxer’s background in jiu-jitsu that sets her apart from her competitors and has helped her progress to the elite ranks.

“She’s got incredible movement and in this bigger weight category, the girls tend to move a little slower and they seem to have a hard time finding and keeping up with Marija,” said Perry. “We’ve turned what would normally be a disadvantage into her competitive advantage.”

Thibeault Coulombe, a four-time Quebec champion, has bloodlines in the sport that have helped fuel his passion for it. Both his grandfather and uncle boxed professionally, while his uncle was also an Olympian.

“I’ve trained every day for three years,” said Thibeault Coulombe, noting his winning first national championship would be a step toward his goal of going to the Olympics. “I’m really excited. It’s going to be a really good experience.”

The 20-year-old athlete said he has overcome his share of injuries — most notably his third broken knuckle at provincials in December — but continues to enjoy the sport.

“There’s a lot of adrenaline when the crowd screams,” he said. “You feel like a real man. You feel strong and you feel invincible.”

Fellow national-level rookie Craston, a five-foot-seven featherweight, said on top of the demanding physicality of the sport, there is a mental toughness that’s required to be successful.

“When you have your first few fights you get nervous and it’s pretty scary,” he said. “That’s pretty hard on the mental side.”

Craston, 16, started boxing competitively two years ago and has made strides as of late. He upset the Canadian featherweight champion at provincials to capture gold, and with that athlete in a higher weight class for nationals, Craston’s path to Canadian glory is even clearer.

“I just know that if Lucas boxes well, anything can happen,” said Perry. “I’m really hopeful for him.”

Craston is Beaver Boxing’s first youth athlete to qualify for nationals in 20 years, and Perry said it reflects the club’s recent focus on youth programs.

“A big part of our mandate is to serve the youth in our community through sport,” she said. “We’ve always had youth in the club, but we’ve really put a real focus on youth competitive rather than just youth recreational boxing.”

Perry, who was recently named a coach for Boxing Canada at the 2018 Commonwealth Games, said it’s her club’s elite coaching staff that contributes to the success of its athletes in the ring.

While each boxer has a designated coach, Perry said all coaches contribute to their growth.

“We all kind of work together,” she said. “It really is a team effort and I think that’s the best approach because each of us brings something to the table. I think that helps to build better athletes.”