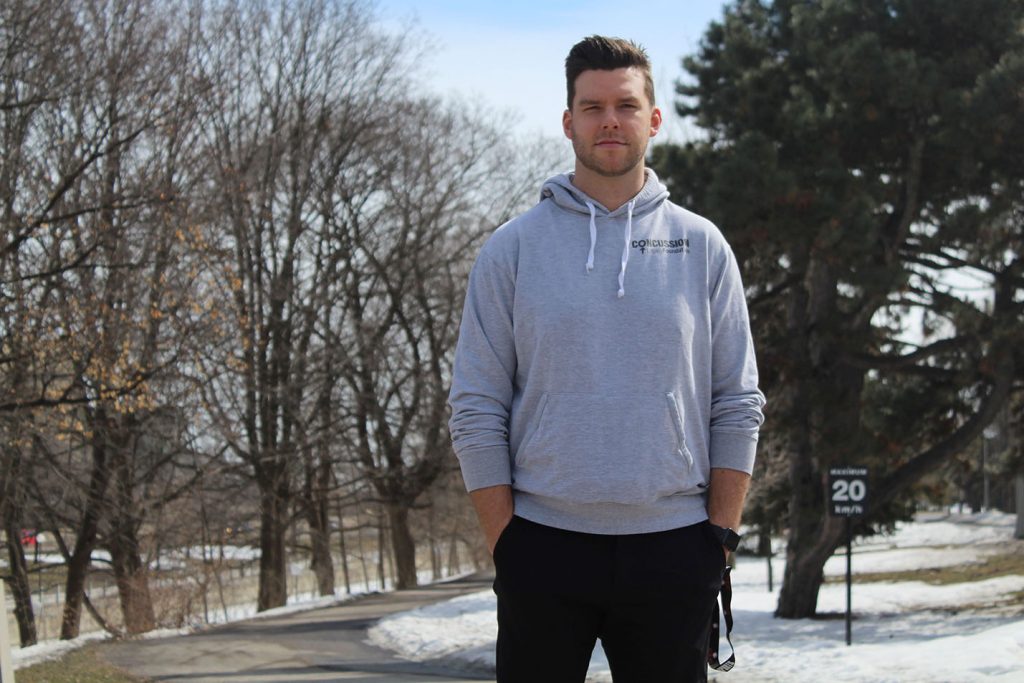 Brent Sullivan, the assistant coach for the University of Ottawa men's hockey team, stands on Queen Elizabeth Drive near the end of the route for the 2018 Tamarack Ottawa Race Weekend Half Marathon which will take place on May 27. Sullivan will be participating in the race to raise money for the Concussion Legacy Foundation. Photo by: Nicole Babb. Centretown News.
March 27, 2018

Sullivan, assistant coach of the Ottawa Gee-Gees hockey team, knows first-hand the lasting effects these brain injuries can have on everyday life.

Sullivan has been involved with the game his whole life, playing in the Ontario Hockey League from 2007-2011 for the Sarnia Sting and the Windsor Spitfires and later playing varsity with the Carleton Ravens.

During his time in the OHL, Sullivan suffered multiple concussions each season, never finishing one healthy. At only 22 he was forced to retire from the sport because of major concussion-related issues and post-concussion syndrome.

Then came a 2015 car accident in which he suffered a particularly severe concussion that truly left him in the dark.

Sullivan, when he was at a low point in his recovery after facing mental health issues, personality changes, and massive weight gain, decided to fight back.

“I needed to make a change, I wasn’t happy with my condition physically and mentally and knew I had to do something, “ said Sullivan, now 28. “Fitness was always a big part of my life playing hockey at a high level, and I knew I couldn’t have any excuses for not running. “

Sullivan decided to run the race roughly a year to the day of the annual Tamarack Ottawa Race Weekend. Since the first marathon back in 1975, the race has grown into Canada’s largest multi-day running event.

This year, Sullivan will begin his 21-kilometre run in front of the Lord Elgin hotel, following a course that crosses the bridge to Quebec and finishing at the other end of Confederation Park along the Rideau Canal.

After beginning his training, he realized he wanted to do something more than just be a concussion survivor who ran a race.

“Being someone who has suffered multiple concussions, and can see the lasting effects of them, it was something that I knew I had to overcome myself in order to do this run.”

Sullivan decided to launch a campaign to educate the public about sports-related brain injuries. It initially began on Facebook, where he first explained his story and his fundraising goals while providing updates on how training was going. It was from here his campaign grew into a collaborative effort.

He was already following the research being done by the Montreal-based Concussion Legacy Foundation Canada on chronic traumatic encephalopathy or CTE, a neuro disease found in people who have suffered multiple head injuries. Sullivan decided to reach out to see how he could help the cause.

“Next thing you knew, I was put in contact with some great people and am now an ambassador for the foundation. Having the opportunity to be a role model for young hockey players when it comes to concussion awareness is something I take a lot of pride in.”

Samantha Bureau, the CLFC’s director of public relations, said that the main role they play in Sullivan’s campaign to promote concussion awareness is to provide logistical support.

“Brent is the action man, per se, and I take care of the behind-the-scenes responsibilities like managing the fundraising pages, writing PR stories, coordinating our social media and media requests, and just supporting him in any way I can.”

Since then, the campaign has grown to include the sale of “Run Sully Sun” apparel and has also evolved to be included as an official participant in the Scotiabank Charity Challenge, a recognized charity the race is supporting for 2018.

As the campaign continued to grow, there was more work to be done. “We knew we needed to step up our game and get to recruiting runners to join us,” said Bureau. “Although Brent and I will be running the half, we have a lot of supporters running in a variety of races across race weekend.”

Kayla Licari, a psychology major at the University of Ottawa, decided to run and train alongside Sullivan for the race back in January 2017.

“I was amazed by Brent’s motivation,” said Licari. “Being a runner myself, I had never seen someone be so determined to train for such a challenge and it has been really inspiring.”

Licari said she and Sullivan kept in touch throughout their training, as she was working towards a race of her own — the Toronto Scotiabank Half Marathon — when he asked her to join him.

“I didn’t even have to think twice,” she said, noting her support for the public education mission behind Sullivan’s quest to complete the half-marathon. “I was definitely going to run with them and help spread the word.”

The Ontario government recently passed Rowan’s Law, an act governing the management of youth head injuries in all sports, sparking a renewed conversation about concussions that has spread across the province and beyond.

Rowan’s Law is named for the 17-year-old Ottawa native Rowan Stringer, who died after suffering two concussions in one week while playing high school rugby.

“It’s been a long time coming in my opinion,” said Bureau. “The foundation has been working to support this legislation since its inception. In the U.S. there is concussion legislation in every state, and it’s only in 2018 Canada passes its first. So hopefully with this momentum and inspiring story, other regions of Canada will continue to follow suit.”

“Training has been long and grueling,” Sullivan said. “I knew I had a lot to overcome as far as injuries and pain would go, but it’s been a great process so far. I think the hardest thing has been the mental battle it is — lots of days you don’t want to run, or would love to turn around early, but it’s pushing through that barrier and continuing on knowing why you’re doing this.”

Sullivan said his main goal is for those who are suffering from post-concussion mental health issues, or daily struggles with recovery, to see that it’s possible to “make that turn.”

“That main reason I started was because wanted to help others while doing this. But this is bigger than myself now. I’m not just running this half-marathon for myself, I’m running for concussion recovery and research,” he said.

“I was in a dark place under a year ago and was able to flip a switch,” said Sullivan. “It took time, it took effort, and a lot of dedication and stepping outside my comfort zone. However, I can guarantee you that it is worth it in the end.”