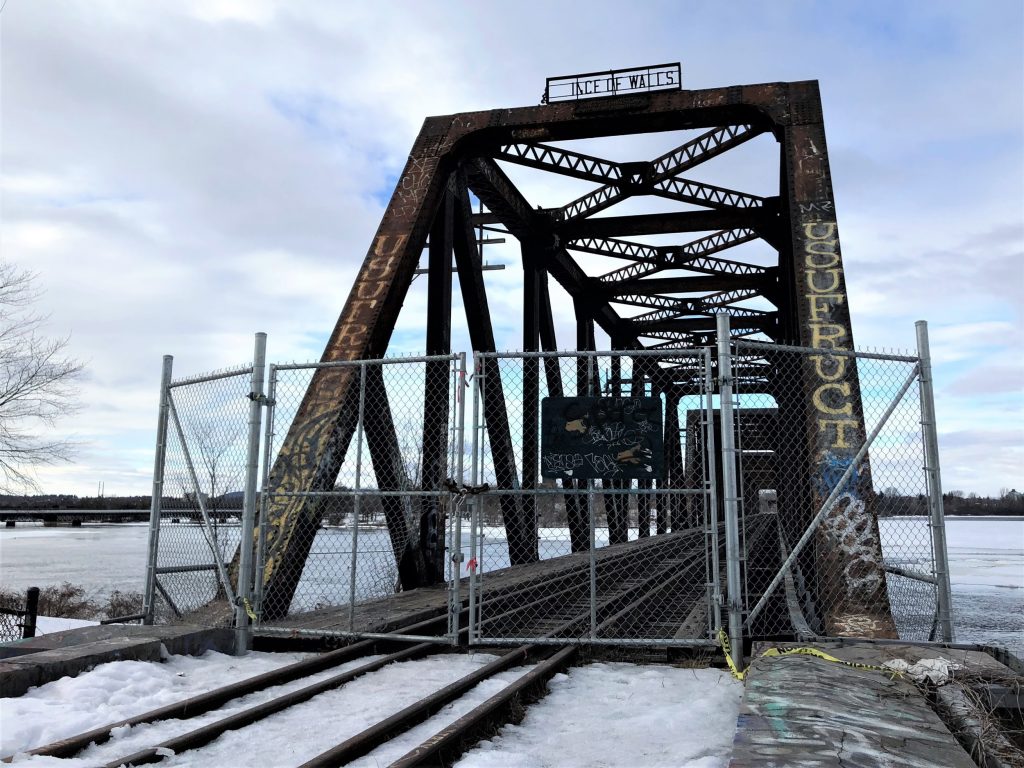 The abandoned Prince of Wales bridge could be repurposed as a light rail connection, a bike path and a walkway across the Ottawa River. Photo: Samuel Berube, Centretown News
March 27, 2018

The City of Ottawa should be given more time to sort out what to do with the Prince of Wales Bridge, says an advocacy group that has been pushing for the controversial Ottawa River rail crossing to become operational again.

The Ottawa River Bridge group, formerly the Ottawa Rail Bridge Project, is urging Transport Canada to grant a one-year extension to the Canadian Transportation Agency’s deadline of April 28 for the city to make a decision on the future of the bridge.

A recent CTA ruling stipulated that the city must decide by that date to either rebuild the bridge or sell it to a developer. But the city would be given a year after that to implement the chosen plan.

ORB is not suggesting that the CTA reverse its ruling altogether. Instead, the bridge advocates are encouraging the adoption of a clear timetable to get the bridge operational again.

ORB founder Aileen Duncan agreed with the city’s argument that it isn’t currently in a position to start a major bridge renewal.

“The city is in the middle of an LRT project and discussions with many stakeholders are necessary,” she said. “There’s a good reason why they would want to push back on the timeline.”

“However, we don’t agree with the idea of overturning the ruling,” stated Duncan. “We’re suggesting the order be varied to provide the city with more time.”

In its letter to Transport Minister Marc Garneau, Duncan states on behalf of ORB: “The concerns expressed by the City of Ottawa are legitimate. Still, we believe that rescinding this decision would allow for the City’s inaction on the bridge and railway to continue.”

Instead, the ORB recommends granting “a one-year extension to the City of Ottawa until they return to the CTA to provide their determination of the intended future use of the Prince of Wales Bridge.”

The letter also states that the city, if it decides to rehabilitate the bridge, should “present a three-year strategic plan” by April 2019 to get the bridge operational.

“In addition, you may wish for the City of Ottawa and Ville de Gatineau to report back to your office in April 2019 to provide an update on their discussions regarding interprovincial transit,” says the letter.

The Prince of Wales Bridge spans the river and links Ottawa to Gatineau with a rail line. Though the tracks are currently inactive, they could become a vital light rail link between the two cities if brought back into service.

Mayor Jim Watson said while the city does want to integrate the Prince of Wales Bridge into the O-Train network, financial limitations are pushing the project to some undetermined future date.

He said the city has to focus on Phase 2 of Ottawa LRT first, and then look into extensions as far as Kanata and Gatineau in the future. He calls them “Phase 3A for Kanata and Phase 3B for Gatineau.”

“Phase 2 is going to cost $3.3B,” said Watson.” All of our funds will be tied up over the next five years with that project, which has been unanimously approved by council.”

Watson said the city’s focus is on maintaining a rail connection above all else.

“That bridge is a rail bridge and we want to maintain it as a rail bridge,” he said. “Let’s upgrade it to modern standards when we have the financial capability to do so.”

The ORB’s letter does not include any specific suggestions for pedestrian and cycling accommodations, though it does mention that ORB has been advocating to include those in the repurposed bridge.

Duncan suggests that a cycle lane and a walkway would be key components of the new and improved bridge. “Definitely bike lanes and pedestrian walkways are crucial,” said Duncan. “I can’t see them not putting bike lanes in.”

As for selling the bridge to a third-party developer, Watson was firm in saying the city intends to keep the bridge and integrate it into the LRT network.

“We’re not going to hand over our bridge to another railroad,” he said. “It’s our railroad and it’s our priority.”

Transportation developer Joseph Potvin of Moose Consortium — a company that has proposed to take over the bridge as part of an expanded Ottawa Valley rail network —  said the city should use the CTA’s ruling as leverage to ask for more funding as soon as possible.

“Instead of taking the road that they are, why doesn’t the city see this ruling as a great opportunity to go to Infrastructure Canada and say, ‘We need X amount of dollars fast because we need to put this bridge back together and we have to reconnect it,’ ” he said.

“I think that’s the only straightforward way for the city to respond,” Potvin said.