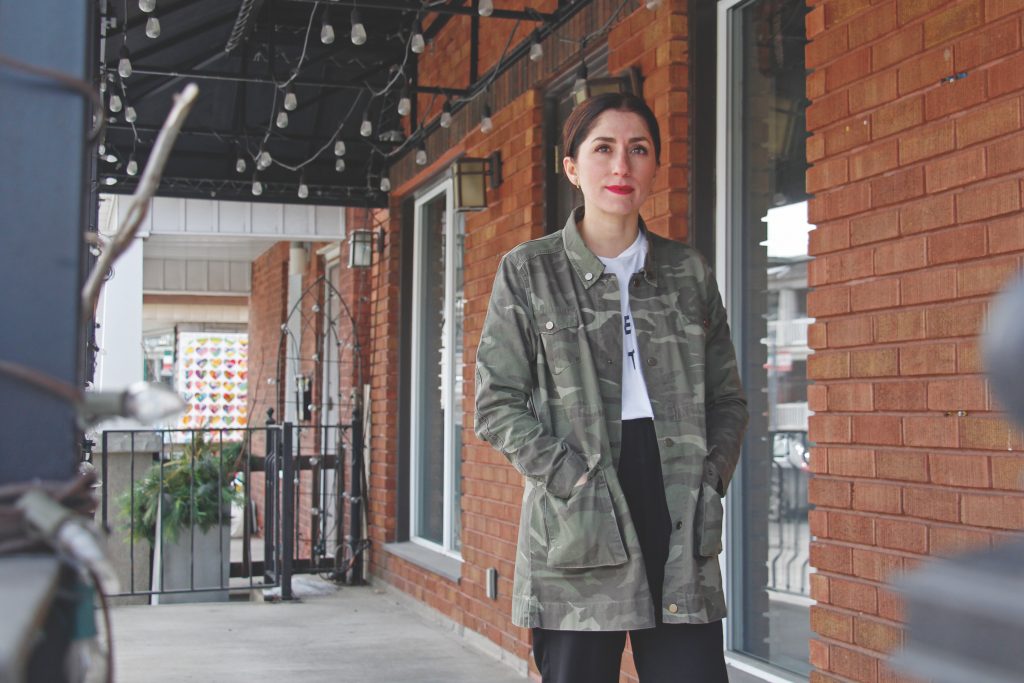 Antonella Ceglia, director of Preston BIA and daughter of Maria Tapalia owner of La Roma, stands on the existing patio for the restaurant. The new Right-of-Way patio accessibility by-law will reduce the other patio from 40 seats to eight. Photo: Saskia Rodenburg, Centretown News
March 27, 2018

Some Centretown restaurants say the city’s new patio bylaw — which goes into effect on April 1 — is forcing them to scale back their patios so much so that it may not even be worth opening them next summer.

According to a report by the city’s transportation committee, these new requirements are part of a city-wide effort to create universally-accessible spaces for customers — specifically those with mobility challenges — in accordance with best-practice Accessibility Design Standards.

The new clearance standards aren’t welcome news for some restaurant owners who say it will negatively impact their businesses, especially during Ottawa’s fast-approaching patio season.

“I spent a lot of money on this patio a few years back and now it’s going to all be taken away,” she said. “For just eight seats, it’s not really worth my time and money.”

Mellor said the new rules had led the owners of both the Prescott and Il Primo Ristorante to decide to tear down their patios, particularly in response to the ramp requirement for raised patios.

“On Preston Street now, we have just five patios. We would have more, but every time we turn around the patio rules are getting more difficult, more expensive and not viable,” she said.

Mellor expressed deep concern for Papalia’s restaurant: “Maria has her kids working there and they’re going to take over. She wants to make sure that she’s leaving them a viable business. It’s really very tough.”

During the city meeting to approve the amendment, Pub Italia — located just three properties away from La Roma — was grandfathered by the city. This means that despite the new bylaw, owner Joe Cotroneo will not have to make any changes to his patio.

His pub was the first to encroach upon the city’s right-of way. Many years ago, Cotroneo invested his own money to push out the curb to accommodate the patio. When the street was dug up for a streetscaping project in May 2008, several trees were planted in the wrong spot. As a result, Cotroneo isn’t required to have the same width of clearance as the rest of the street.

Though his business will not be affected by the new bylaw, Cotroneo expressed sympathy for other owners, acknowledging that “it’s going to be very difficult for some.”

“If you look at La Roma, she’s in the same block with the exact same challenges, and the city is going to say no to her,” Mellor said. “It just feels mean.”

Though the new bylaw may pose a number of challenges for restaurant owners in Centretown, the city has promised to grant a fee reduction of 25 per cent of the total cost of a patio permit to a maximum of about $2,000.

Mellor said she isn’t impressed by the fee reduction, as it will only be granted to those restaurants who can make their patios compliant by April 1.

“That’s an inadequate amount of time and they’re not even rolling the funding over into next year,” she said. “There will be very few who can be eligible for that.”

Though a representative of the city’s accessibility advisory committee was unavailable for comment, it has been the city’s goal for many years to improve the accessibility of Ottawa’s streets for citizens who use wheelchairs or face other mobility challenges.

The Acessibility Design Standards standards were released in 2012, providing a new benchmark for city infrastructure.

The ADS overview states that the city aims to become a leader in creating accessible environments through the “design of products and environments to be usable by all people, to the greatest extent possible, without the need for adaptation or specialized design.”

The document notes that the ADS was designed with diversity, barrier removal, provincial directions and changing demographics in mind.