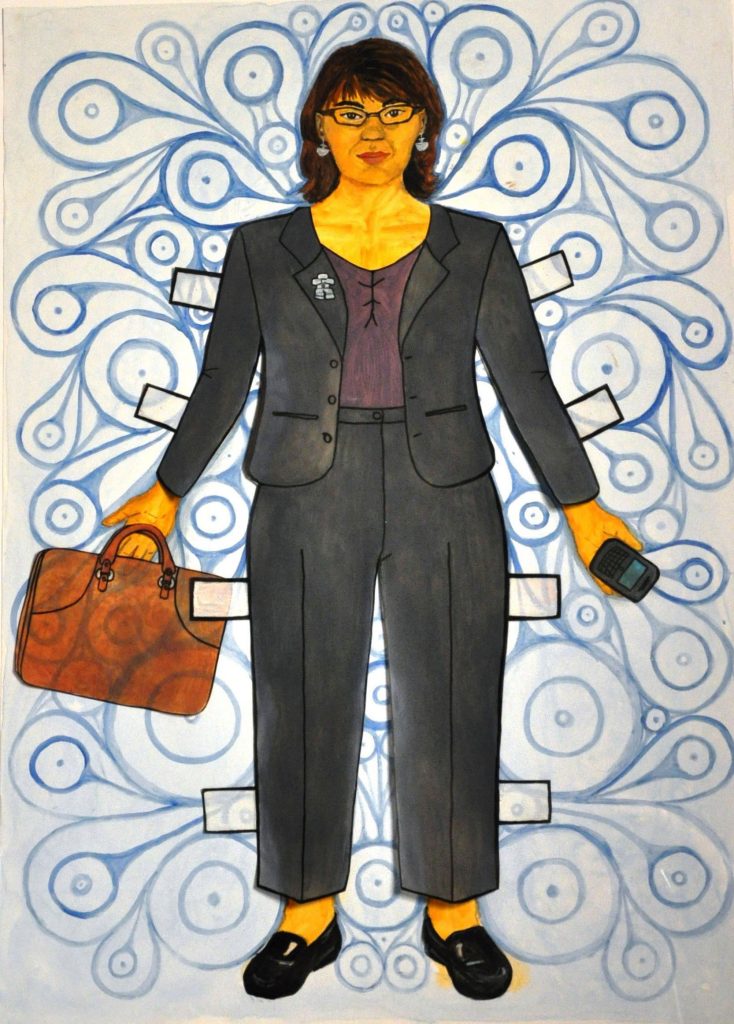 The City of Ottawa, which has amassed a collection of nearly 3,000 artworks, is looking to add more Indigenous art to its holdings — the source of displays at more than 150 public places around the capital.

Municipal officials are reaching out specifically to Indigenous artists in this year’s direct purchase program. Through the program, local artists submit applications for their work to be acquired for the city’s art collection and displayed to the public in libraries, community centres or other city-owned facilities.

Pieces in the city’s collection vary in prominence and form. The Terry Fox statue across from Parliament Hill, well-known to Centretown residents, is a city-owned work. The pictographic steel bike racks featured along Bank Street are more subtle examples.

While the direct purchase program to add to this collection is open to all of Ottawa’s professional artists, this year’s call for proposals on the city’s website specifically states that “applications from artists and representatives of diverse origins, First Nations, Inuit and Métis are welcome and encouraged.”

The program’s current focus on Indigenous art is part of the municipality’s Reconciliation Action Plan, adopted by city council on Feb. 28 as Ottawa’s strategic response to the recommendations of the national Truth and Reconciliation Commission.

The TRC’s recommendations are aimed at addressing historical and contemporary injustices faced by Canada’s Indigenous peoples.

One of the commitments in the city’s action plan is to “develop a tailored process to respectfully acquire and display art from Indigenous artists into the City of Ottawa Art Collection.”

The art collection currently consists of more than 2,700 pieces. While some of these artworks are exhibited in galleries at City Hall in downtown Ottawa, most are on display in other public venues across the city — including satellite municipal offices, light rail stations, parks and other community hubs.

Bringing in more Indigenous art is a “welcome” move, said Jay Odjick, a comic book writer and TV producer from the Kitigan Zibi Anishinabe community near Maniwaki, Quebec, about 120 kilometres north of Ottawa.

“While it may be harder to find First Nations or Indigenous art, we’re still out here, we’re dynamic, we’re vibrant, we have contributions to make, and our culture to share with the rest of Canada,” said Odjick.

“It gives us a chance to share our voice, and it gives Canadians a chance to have their own lives enriched by sharing this culture that’s been here since time immemorial.”

As a member of the Ottawa arts scene, Odjick said he intends to make an application to have some of his creations purchased by the city.

Sarah Patterson, registrar for the city’s art collection, said the increased focus on Indigenous art is being highlighted at the submissions stage. In other words, the city is reaching out to Indigenous artists and encouraging them to submit applications, but acquisitions will not necessarily be made through any quota system during the city’s selection process.

Some of the outreach efforts have been made through the work of a liaison, Indigenous art curator Danielle Printup. Printup, also from the Kitigan Zibi community, has been contracted by the city to contact Indigenous artists and galleries and encourage them to apply for the program

Jonathan Browns, officer of art collections with the city, said Printup’s work has produced a “positive” response, and he anticipates it will translate into more submissions — though he notes it will be impossible gauge the success of the outreach effort until after the April 23 application deadline.

After applications for the direct purchase are collected, the city’s public art program will put together a jury to parse the submissions.

The reason the jury is formed after the submissions stage is twofold, according to Browns. First, applying artists cannot also sit on the jury; and secondly, Browns states that the city tries to structure the jury to match the submissions they have received.

This might mean including a juror who specializes in some unique art style that has been submitted. But in the case of judging Indigenous art, it will mean someone familiar with the conventions and forms of those cultures.

Odjick said he finds this commitment an important one.

“Say, for example, a non-Native person were to be judging this… I don’t see how they could judge the artistic merit of artwork and an aesthetic, and a style, and a language visually that they’re not familiar with,” said Odjick.

He added that he was encouraged to learn of Printup’s involvement in the Indigenous outreach process.

The direct purchase program for the city’s art collection goes back to 1985, when it was created under then-mayor Marion Dewar in an attempt to broaden the city’s artistic holdings. At that time, it was headed by Mayo Graham, the municipality’s first visual arts officer.

Graham is also well known through her work with the Ottawa Art Gallery and the National Gallery of Canada.

Graham said that although some purchases of Indigenous art were made in those early days, they weren’t specifically sought after. She said the new commitment to include more Indigenous art is “very important.”

Painter David Jones, another longtime member of the Ottawa arts scene, echoed the sentiment: “It’s time for most of us to stand back and just let things go (the Indigenous artists’) way,” he said. “It’s the least we can do.”

Of the artworks in the city’s collection, Brown said more than 85 per cent are currently on display in nearly 170 community spaces.

To apply for the direct purchase program, artists must submit a statement and resume, as well as ten photos of their artwork.

Information on how to format an application can be found in the “Calls and opportunities in culture” section of the city’s Arts, Heritage and Culture page; or at https://ottawa.ca/en/residents/arts-heritage-and-culture/calls-and-opportunities-culture