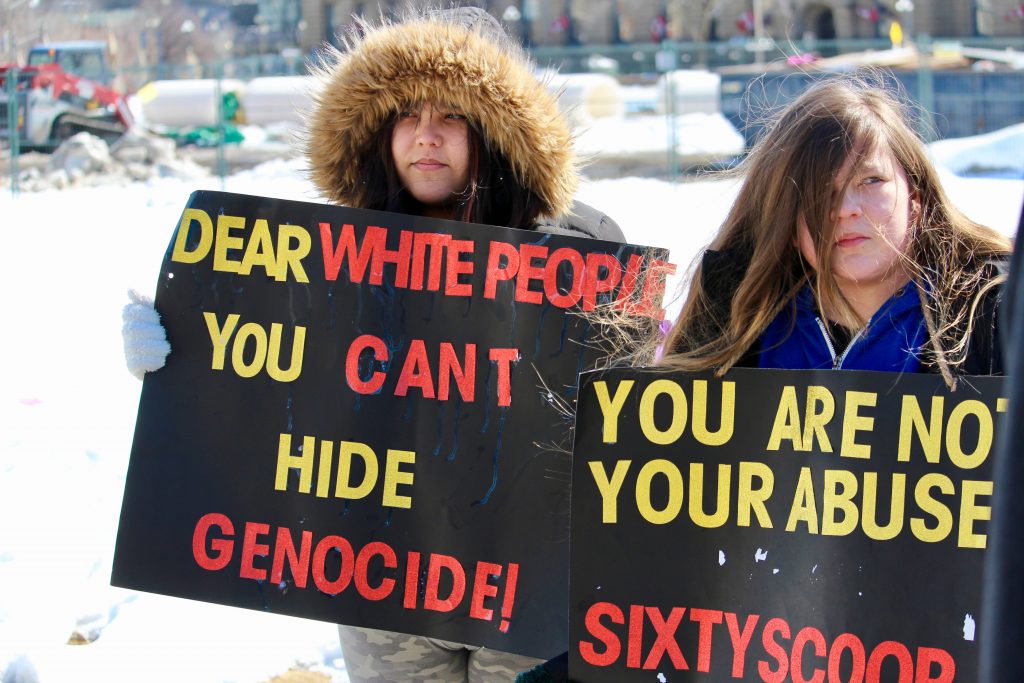 Thousands of Indigenous children were apprehended from their families and adopted into non-Indigenous families during the Sixties Scoop. Photo: Aaron Hemens, Centretown News
March 27, 2018

Emotions were running high on Parliament Hill recently as a handful of survivors of the “Sixties Scoop” publicly shared their own traumatic experiences of a tragic policy that has affected generations of Indigenous families across the country.

The Sixties Scoop was a child “protection” initiative launched by the Canadian federal government in the 1960s that saw thousands of Indigenous children taken from their homes and placed into non-Indigenous households.

The demonstration in Ottawa was one of many solidarity rallies for Sixties Scoop survivors that took place in cities across the nation on March 16, Toronto, Montreal, Winnipeg, and Vancouver hosting their own events.

The rallies were organized by the National Indigenous Survivors of Child Welfare Network —simply known as “The Network” — a coalition run by and for Indigenous people, specifically those who have been affected by child removal systems in Canada.

Many of the demonstrators wrapped purple ribbons around their left arms to identify themselves as survivors of the Sixties Scoop, while others did so to spread awareness and show solidarity with the survivors.

According to Statistics Canada’s 2016 Census, the Ottawa-Gatineau region was home to more than 10,000 Métis and 1,280 Inuit, which was the largest Inuit population for a Canadian city outside of Nunavut.

Brenda Zonruiter, a survivor of the Sixties Scoop, told the story of how she recently reconnected with her birth mother earlier this year after being separated from her for 48 years.

“Prime Minister of Canada, I ask, what would you do if your children got taken away for no apparent reason, from Children’s Aid and placed in foster care, and you would have no way of knowing where they are for lots and lots of years without your consent, then to be adopted out? How would you feel?” Zonruiter said.

Colleen Cardinal, the coordinator and co-founder of The Network, said the purpose of the rallies was to support and amplify the voices of Sixties Scoop survivors scattered around the globe.

In addition to showing solidarity with survivors, Cardinal said that rallies were also meant to challenge the federal government’s proposed $800-million settlement for Sixties Scoop survivors, an offer that left out survivors from groups such as Métis and non-status Indigenous People.

Following the rally, the Odawa Native Friendship Centre — based in Centretown at the City Centre complex off Albert Street — convened a gathering at St. Paul’s Eastern United Church, hosting a traditional pipe ceremony, feast and information session for survivors seeking more details about the settlement.

At the information session, Douglas Lennox, a class action lawyer who helped with the negotiation of the proposed settlement, said he was proud to help survivors make informed decisions about the settlement.

“As a lawyer, you kind of dream of this type of case, that you get to make some change and help people. I’ve worked on this case for seven years and it’s been quite a personal journey for me,” said Lennox. “I have to think of my own ancestors who came to this country, and this is a chance for me to try to make some amends for my ancestors and their history.”