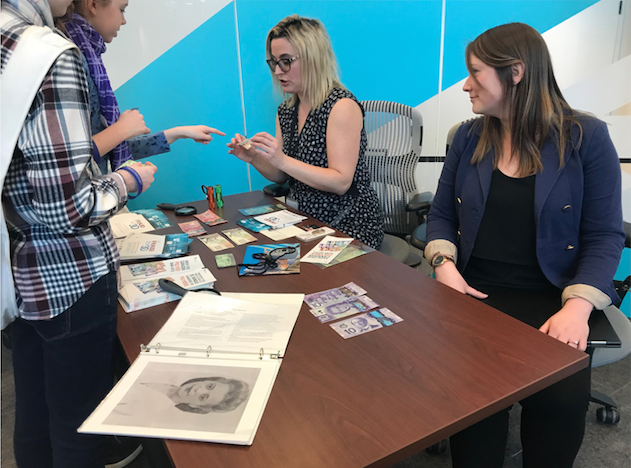 People lined up recently at the Bank of Canada Museum kiosk to see the new $10 bill with Viola Desmond. Not only did this bill make Canadian history by featuring a civil-rights activist, but it is the most secure note to ever be released.

Families were eager to find out about this bill’s security features from the Bank of Canada and RCMP representatives. This is part of an educational program to teach the public about counterfeit money.

Cpl. John McMath of the RCMP’s counterfeit unit said the most notable security feature on the bill is a leaf created with optical ink called a “spark image.”

“It’s the first time they’ve used that type of technique on a Canadian bank note,” said McMath. “It’s stuff like that that they can keep adding that keeps the notes one step ahead.”

Rachel Rosenfeld, marketing analyst for the Bank of Canada, said this new bill drew a significant crowd. “People are very interested in the design, the orientation, and in learning about different elements on the note,” she said.

Rosenfeld has also been teaching people at the kiosk how to recognize counterfeit bills. Her advice is to check the transparent band, make sure the holographic images are on both sides and feel that the bill is smooth all the way through. “Look, feel and flip is the mantra we give people,” she said.

This trick helped Rob Dialessandro, manager of Slater Street Market, when he encountered a counterfeit bill two years ago. He said a man came into his store to purchase a product but tried to pay using counterfeit money.

“I held the bill up to the light and could see right through it,” he said. “When I told him, the guy goes, ‘Really?’ and he said he didn’t have any other payment. So he probably knew it was counterfeit.”

Dialessandro said it used to be common for people to make counterfeit money with paper, but in recent years he has not had as many encounters with it.

According to McMath, this is because the use of counterfeit money is decreasing. “For every one million notes, nine of them are counterfeit in Canada,” McMath said.

McMath said this can be compared to the 2004 spike in counterfeit money when there were about 470 counterfeit notes per million.

He attributes the decline to when notes made of polymer, a plastic material, began replacing paper notes in 2011. “The paper money was much easier to counterfeit than the polymer,” he said.

Despite the decline of counterfeit notes in Canada, McMath said it is still important to examine bills for authenticity. “If everyone checked every bill, we wouldn’t have counterfeits because people would be able to spot them right away,” he said.

In the event a counterfeit bill is found, McMath said it can be brought to the bank or the local police. There is no reimbursement for the bill.

“The last person holding the counterfeit bill loses,” he said. “From a counterfeiter’s perspective, once it’s passed on, the job is done. They’ve won because it’s out of their hands.”

McMath said the RCMP takes all instances of counterfeit money seriously, as it is an indictable offence with a penalty of up to 14 years of jail time. He said all leads are followed up on through interviewing the victim and examining trends.

“We’re always monitoring and investigating, so we’re never going to turn away from the issue,” he said. “We’re always on it.”