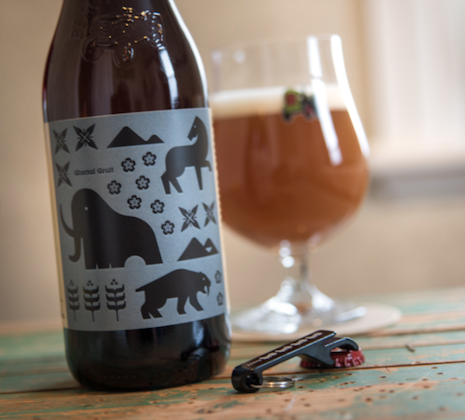 Glacial Gruit, a special brew created for Canada's 150th anniversary by Beau's and botanists from the Canadian Museum of Nature, was inspired by the type of vegetation found in the gut of a long-frozen Ice Age horse found by miners in a Yukon gold field. Photo: Beau's Brewery
April 10, 2018

Botanists from the Canadian Museum of Nature recently helped Ottawa-area microbrewer Beau’s to create a limited-edition beer inspired by the last meal of a horse that died during the Ice Age more than 25,000 years ago.

The idea behind Beau’s Glacial Gruit came from the stomach contents of the 26,000-year-old horse, the remains of which were unearthed by gold miners in Yukon in 1993.

And while the ancient species may be extinct, the plants the horse ate before its death still flourish in the Arctic.

That allowed the Vankleek Hill-based brewery to create a brand of beer — with the help of paleobotanists from the McLeod Street museum — that featured Ice Age flavours.

Fireweed, rosehips, Yarrow, and Mountain Sorrell buckwheat are the plants responsible for the beer’s sweet aroma. However, they grow in Canada’s High Arctic, so these plants are not commonly sourced for human consumption.

For that reason, museum experts ventured north in order to collect a sustainable number of paleo-plants for Beau’s Brewing Company. The plan was to bottle flavours that existed nearly 30,000 years ago.

“The glacial clay, which was used to ‘fine’ the beer to screen sediment out, was collected from an island in Nunavut,” he explained.

Sokoloff, who obtained the clay for Beau’s, said the beer derives its name from this unique screening process — the so-called ‘fining’ that makes a beer less hazy.

The alliteration in what became “Glacial Gruit” was just a happy accident, because a gruit is any beer that uses a centuries-old brewing method.

“So in a way, it was just meant to be,” said Sokoloff. “We created a beer that could tell the best story of Canada’s last glacial period.”

Jennifer Beauchesne, who was part of the Beau’s brew team, said the notion of ingredients from an ancient horse’s gut gave some people pause.

“Most people wanted to be assured,” she said, “that it wasn’t the actual ingredients found in the horse’s belly that went into the beer.”

She added that working with the plants wasn’t difficult.

“We made teas with the ingredients first to see what kind of flavour and aroma we get from them before making them into a brew,” said Beauchesne. That way, in case anything the Yukon horse ate was too obscure or unpleasant, the team would know.

There are no unambiguous records of humans in what became northwestern corner of Canada until many millennia after the horse lived there. The only animals known to consume these palaeo-plants lived in the so-called Mammoth Steppe, and many of them are extinct today — including the Yukon species of horse.

The Ottawa museum worked with other members of the Alliance of Natural History Museums of Canada to research the ancient animal.

“The Yukon Horse discovery was a significant one for the alliance,” because it provided new insight into glacial-era flora and fauna in Canada, Beauchesne said. “And the fact that the discovery includes potential brewing ingredients was a deal-maker for us,” she added.

Sokoloff was also responsible for working with the palaeo-plants and locating their modern-day versions in the Mammoth Steppe – including the land bridge that once connected Yukon and Alaska to the eastern edge of the Asian continent.

The ecosystem is represented on the beer’s label, which is illustrated with images of the glaciers, the plants, the Yukon horse and, of course, mammoths — the best known of all extinct Ice Age animals, as symbolized in the sculptural figures on the CMN property in Centretown.

“Mammoths were the landscape engineers at this time,” Sokoloff said. “They paved the way to a refuge from the ice where there were plants to eat.

“Now these plants don’t exist today in the same area, but you can find them in different ecosystems across the Arctic,” he said.

Some you can even smell when you’re walking the northern landscape, he added.

“The goal was really to raise appreciation of the natural world,” Sokoloff said, which is why the beer became the “brainchild” of the ANHMC.

The alliance partnered with Beau’s last year to create the gruit as part of the brewery’s Canada 150 series marking the sesquicentennial of Confederation.

“I spotted it at a couple events last year showcasing local breweries,” said Matt Venner, who describes himself as a “big Beau’s fan.” Venner tried the gruit at a Nature Nocturne event at the museum in December.

“The mammoth on the label actually caught my eye,” he said.

“I knew it would be a tasty beer because it was all about Canada,” Venner noted. “I just wish I was tasting what a mammoth ate during the Ice Age rather than a horse.”

Venner, who is also a history student at Carleton University, said he was glad Canada’s past was being highlighted in something modern like craft beer.

“This whole project was really a collaborative effort across Canada,” Sokoloff said. Staff at the Royal Alberta museum analyzed the stomach contents of the horse. Sokoloff and his team in Ottawa sourced the ingredients and brewers at Beau’s brought the flavours to a bottle.

The Glacial Gruit is no longer being sold at the brewery, and the last keg was tapped at Nature Tastes, an event at the museum in March.

Call it an extinct brand of beer.

However, this isn’t the end of the partnership.

Sokoloff said he looks forward to helping inspire another beer someday that will allow botanists and brewers to work together again.