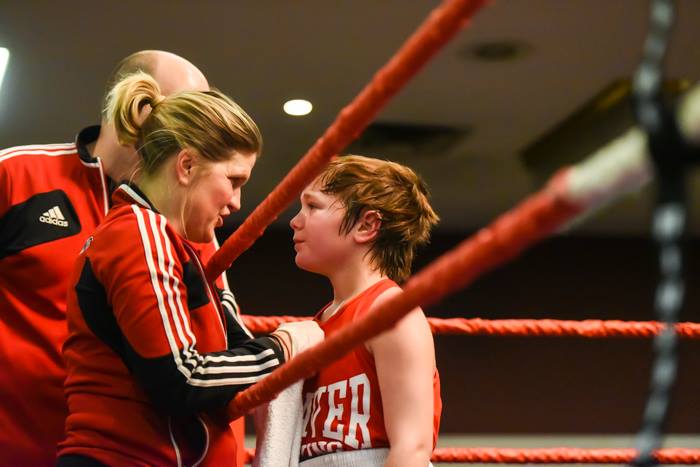 Jill Perry (left) coaches an athlete in his first bout. Perry will represent Canada as part of an internship program to promote women in sport at the 2018 Commonwealth Games in Gold Coast, Australia in April. Photo Provided by Jill Perry.
April 10, 2018

Beaver Boxing club president Jill Perry says being named to Boxing Canada’s coaching staff for the 2018 Commonwealth Games has been a big step toward her goal of leaving a lasting impact on women’s boxing.

Last month, Boxing Canada announced Perry’s selection for a Commonwealth Games Federation internship program designed to promote women in sport. She is coaching at the April 4-15 competition in Gold Coast, Australia, but is also taking part in courses and seminars with 18 other women from across the Commonwealth who were also chosen.

“Getting this internship – I mean, wow. Really, I’m humbled,” said Perry, a former Boxing Ontario head coach and Coach of the Year winner.

Canada is second all-time in boxing medals at the Commonwealth Games, and earned three at the last games in 2014. Seven athletes are competing this year under the guidance of Perry and two other Boxing Canada coaches.

Perry said she hopes this coaching opportunity is the first of many to help grow female boxing, a goal that has shaped her 20 years of involvement in the sport.

In 2001, she had her first bout at the Little Italy boxing club, fueling her desire to continue in the sport.

She reached her first national championships three years, later but lost to the reigning champion in the semifinals. She went on to win bronze, and said that tournament changed her career.

She did just that, winning the first of two straight Canadian featherweight (57 kg) titles. At 37, though, she was considered too old to compete internationally and never got that chance in her career.

“I was a little upset, but now I see it as that’s the way it worked for me,” she said. “My job now is to make the kids I coach get every opportunity available, and I live vicariously through them.”

In 2007, she hung up her gloves and began taking over the Beaver Boxing club from long-time president and personal mentor Joe Sandulo a few years later.

“Jill works really hard toward developing youth boxing. We’ve never had that before,” said Bilal, highlighting Perry’s importance to the club. “She’s the one who’s holding everyone together.”

“She never tells anyone she is the head coach or president, she’s easy going and doesn’t want people to praise her,” said Bilal, noting it’s this attitude that contributes to the club’s friendly, supportive and family-like atmosphere.

“It’s like in the movie Rocky,” said Mark Van Dusen, a boxer at the club who is approaching 70. “It’s just full of atmosphere. I love it here.”

“Not until I got here and started to really get into it deeply did I appreciate just how profound a sport it is and how much there is to know,” he said.

While Perry doesn’t anticipate her time as a coach coming to an end anytime soon, she said she hopes to keep the club’s legacy intact when she does leave.

For now, she will continue to lead the Beaver Boxing club and look to use her Commonwealth Games internship to promote women in sport.

“If I had one major goal, it’s to advance the sport of female boxing,” said Perry. “I want to develop the sport and get girls involved. If I had one thing that I want to be my legacy, that would be it.”

“The games to me is just the start of what I want to get working on.”