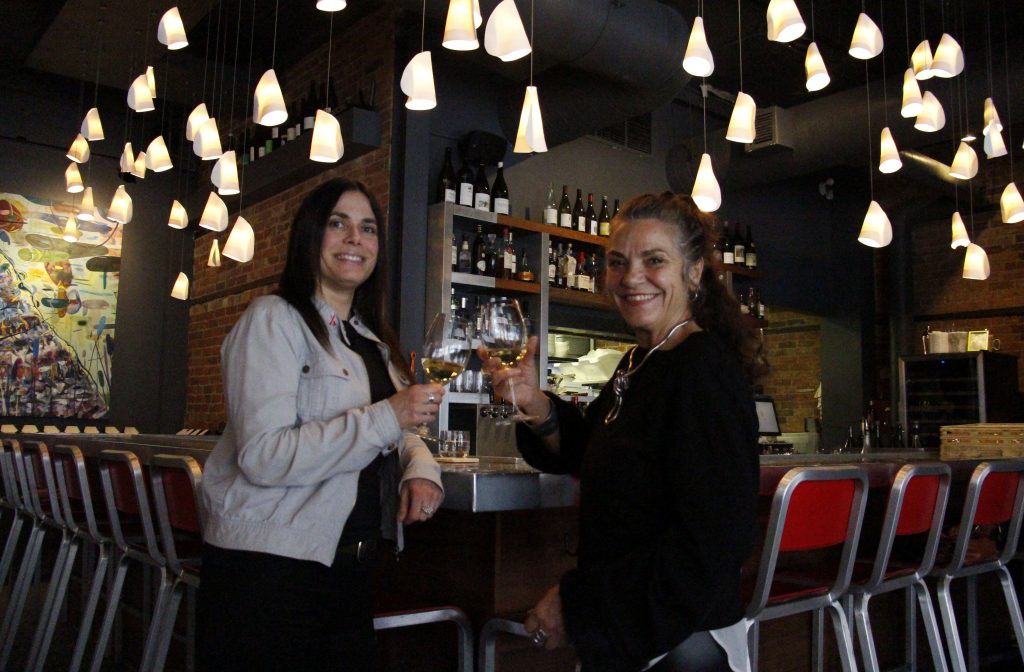 Linda Truglia from Bruce House (left) and Lise Turpin from the Snowy Owl AIDS Foundation (right) pose ahead of the upcoming A Taste for Life event happening April 25 in which restaurants donate 25 per cent of their evening sales to AIDS Service Organizations in their community. The pair are pictured at Fauna restaurant at 425 Bank Street. Photo: Saskia Rodenburg, Centretown News
April 10, 2018

A number of Centretown restaurants are taking part in a major fundraiser to support HIV/AIDS organizations.

The Snowy Owl AIDS Foundation and Bruce House will mark the 20th anniversary of the “A Taste for Life” campaign on April 25, when participating restaurants donate 25 per cent of their revenues to fighting HIV/AIDS.

Some 36 Ottawa restaurants – including several in Centretown – are taking part in the fundraiser that involves 23 communities across Canada.

Rather than just ask restaurants for a cut of their revenues that night, organizers help by having hosts drive business to the venues.

“We decided to change that recipe and introduce hosts,” said Turpin. “Instead of just giving us the money we do something for them, bring people to the restaurant.”

Snowy Owl was established in 1995 in memory of Turpin’s brother, who died of AIDS.
“We then, as a family, decided to do some fundraising and awareness around it.”

Since then, Snowy Owl has grown into a significant feature of the local HIV/AIDS community.

“We are there to raise money and awareness around HIV and we support other organizations who supply the services,” Turpin said.

Bruce House, the co-organizer of “A Taste for Life,” will use its half of the funds to provide direct client support services.

Established in 1988, “Bruce House came about because a lot of people at the time were dying of AIDS,” said Linda Truglia, manager of volunteer services and community relations. “It started as a five-bed residence where people came to live their last days.”

“Currently, we house about 65 people through our Supported Independent Living Program,” Truglia said.

The growing popularity of “A Taste for Life” sees each charity take in roughly $70,000 to fund initiatives, a crucial windfall as money has become scarce.

“Due to funding cuts and unsustainable funding, we lost our transition house,” Truglia said.

“There are so many cutbacks now in funding,” Turpin said. “There’s not enough money being raised. It has to go into the hands of the organizations running the event.”

The crux of the campaign is that it incentivizes participation through the promise of increased profits for restaurants, which in turn guarantees more money for the charities.

“It’s a win-win situation,” said Truglia. “It’s a Wednesday night, a lot of restaurants aren’t super busy then. They didn’t have a problem saying yes because it brings people in, we get 25 per cent, and they’re doing a good thing.”

Despite the uptick in profits, local restaurateurs seem less concerned with the financial boon than being able to help their community.

“I support Bruce House and everything that they’re doing,” said Jon Svazas, owner and chef at Fauna. “We’re also in proximity to the Village, so it made sense to be a part of it.”

He added: “I just feel it’s the right thing to do, to be honest. Nothing more complex than that.”

This strong commitment to “A Taste for Life” and the HIV/AIDS charities highlights the ongoing struggles with the disease among people in Ottawa.

“For a lot of regulars, it’s a moment for reflection and supporting and thinking about the people they’ve lost,” said Truglia. “It’s a big thing.”