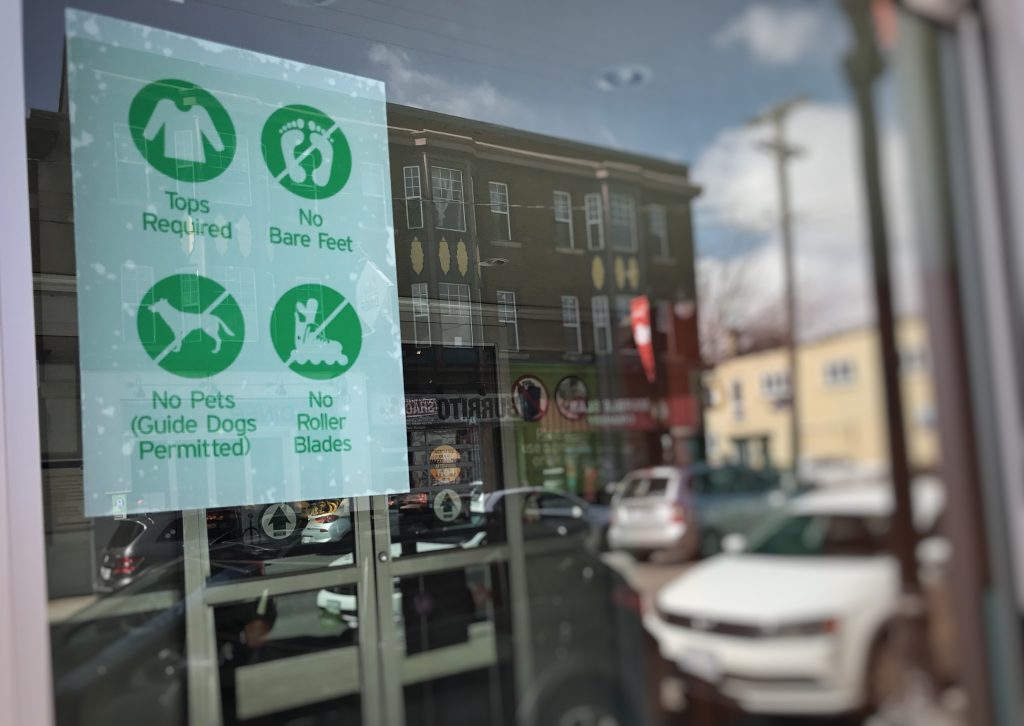 A “no pets allowed” sign outside of a Metro grocery store on Bank Street. Photo by: Alison Trenton, Centretown News.
April 10, 2018

The City of Ottawa has tightened its rules on service animals, but there are still concerns that some people could take advantage of the designation to get special treatment for pets they regard as “support animals.”

City council amended the Animal Care and Control Bylaw on March 28 to include stricter requirements for documentation from health professionals to prove a person’s need for a trained service animal, and detailing of how the animal must be identified.

Council agreed that the definition of “service animal includes a dog or cat that is used in therapy and that is registered with a recognized organization for that purpose.”

Service dog owners, such as people with a visual impairment accompanied by a guide dog, have expressed concern the concept may be devalued as a result of “support animals” being viewed confused with “service animals.”

Depending on levels of experience and training, such support animals can prevent service dogs from doing their job — with some even attacking dogs-on-duty, said Chuck Burke, a trainer for Service Dogs Ontario.

Burke said service dogs are trained to provide a specific function depending on the disability of the owner, such as a dog who is trained to bark when a doorbell rings to notify a person who is hard of hearing.

A therapy or support dog is different in the sense that its principal purpose is to calm its owner. This type of support can be described as the equivalent to a comforting “blanket” — something people have with them to provide reassurance, according to Burke.

“The simplest way to make a distinction between the two is that a service dog is specially trained to assist an individual to manage their disability, life-altering injury, or challenges associated with chronic illness,” said Joanne Moss, the founder and national director of the Canadian Foundation for Animal Assisted Support Services.

“When looking at support animals, you have to ask: has the animal had any training to be able to provide the needed service?” Moss said. “The focus is not on the animal itself but on the work the animal does.”

“Public access of service dog teams is still challenging at best due to a lack of consistent recognized national standards,” Moss said.

Burke said he often speaks with employees at local restaurants and fast food chains upon arriving with service dogs, letting them know his dogs have been trained and are certified, to avoid any possible conflicts.

Joanna Hearn, who was diagnosed with epilepsy in February 2009, said she didn’t know what to make of her diagnosis. But after receiving her service dog, Lucy,“every day is a little bit brighter.”

But the rules and regulations around service animals have not been standardized to ensure all animals are trained to the same standards.

“The many reasons the term ‘standards’ has fostered a lot of misunderstandings and tension is because the world of service dogs is not governed or regulated by a third-party,” said Moss.

“The rules right now are pretty open, but I know on the federal level they are working on one set of rules” to unify all provinces across Canada, said Burke.

Ontario service dog trainers said the hope is to standardize the rules, eliminating the confusion between service animals and support animals.

“The human-animal bond is powerful,” said Moss. “It changes lives, communities, and even Canada’s footprint. However, remembering that service dogs are not pets and that not all dogs are suited to be a service dog is vital to the welfare of the canine.”