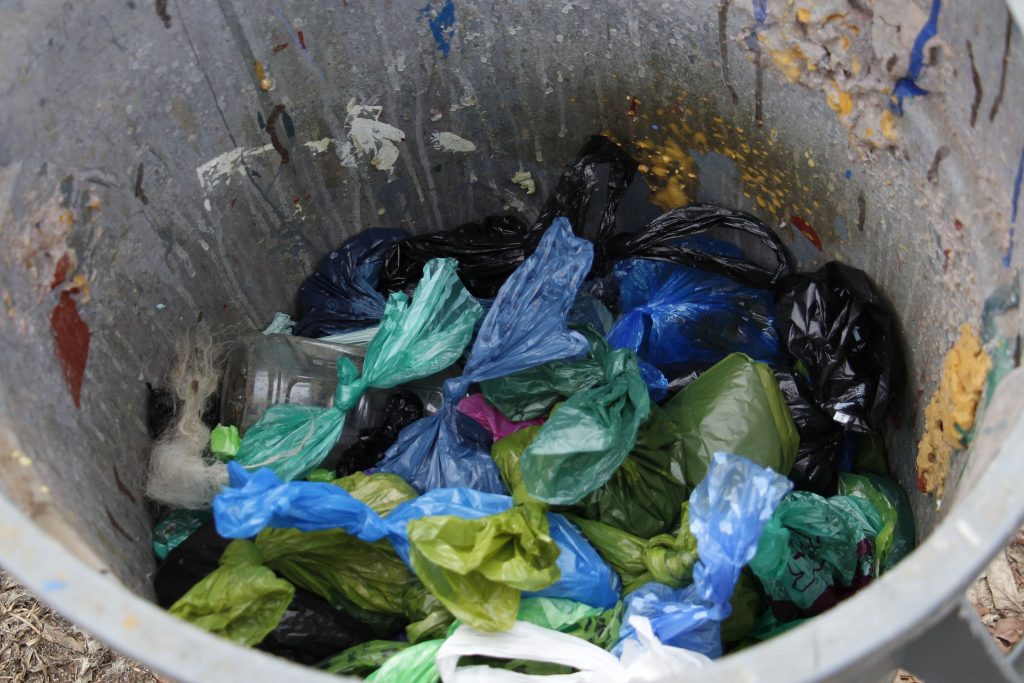 Dog waste in a garbage bin at the dog park on the corner of Slater and Bronson in Centretown. Photo: Saskia Rodenburg, Centretown News.
April 10, 2018

The city’s recent decision to allow dog waste and plastic bags in green bins has sparked concern from both experts and some local councillors — including Somerset Coun. Catherine McKenney.

After a 19-3 vote on March 28 to approve revisions to the city’s waste contract with Orgaworld Canada Ltd., supporters of the move said the changes will make it easier for residents to recycle organic waste, which will in turn keep it out of landfill.

Currently, according to city staff,  only 51 per cent of the general population is participating in the green bin program. City staff recommended the changes to increase the participation rate for composting.

But McKenney said she was concerned about the lack of any solid data to support the notion that the changes would increase participation from green bin users.

“This will just encourage more people to use single-use plastic bags when we should be eliminating them,” she said.

WWO’s Bill Toms added that this is a step backwards for the city.

“You have a lot of people in Ottawa who have been properly trained and they’re very conscientious about using their green bins,” said Toms. “Now the city is throwing up a green light and saying to just throw plastic bags and dog waste in there and it will be fine. Orgaworld will take care of it.”

For years, Toms has been keeping an eye on the city’s waste policies and the deal with Orgaworld.

“I’m convinced that the city keeps making a bad deal worse. We have a history of making bad deals in the area of waste and now they’re just dressing it up in green clothing,” he said.

Toms is also concerned about the inclusion of dog waste: “It’s not a totally benign substance and there are issues associated with animal waste for small children and anyone with a compromised immune system. The city should never be spreading these types of bio-solids on fields.”

Along with McKenney, the dissenting councillors were Kitchissippi’s Jeff Leiper and Rideau-Rockcliffe’s Tobi Nussbaum, who have publicly voiced their concerns.

In an op-ed piece in the Ottawa Citizen, Nussbaum stated: “The stark and negative impact of single-use plastics means we ought to be considering how to reduce their consumption, not facilitate their use.”

He added that 10 Canadian cities, including Victoria and Montreal, have pursued a ban on the sale of plastic bags.

“We have seen cities implement a range of tools to prevent plastic bags from littering our city streets, sitting in landfills, and ultimately polluting ecosystems through micro-plastics and debris.”

McKenney said that if the city or the province eventually bans plastic bags, Ottawa residents will still have to pay Orgaworld for the service of having plastic bags in the green bin.

“We are charging residents for a levy even if the day comes where we don’t use plastic bags,” said McKenney.

The city report estimated that the new service will cost the city about $626,000 annually, which translates to about 15 cents more per month for each household.

Despite the problems with the planned arrangement with Orgaworld, McKenney said there was no public or expert consultation on the impacts of the deal.

“They should really do better,” said Toms.

The new green bin service is expected to start in mid-2019.