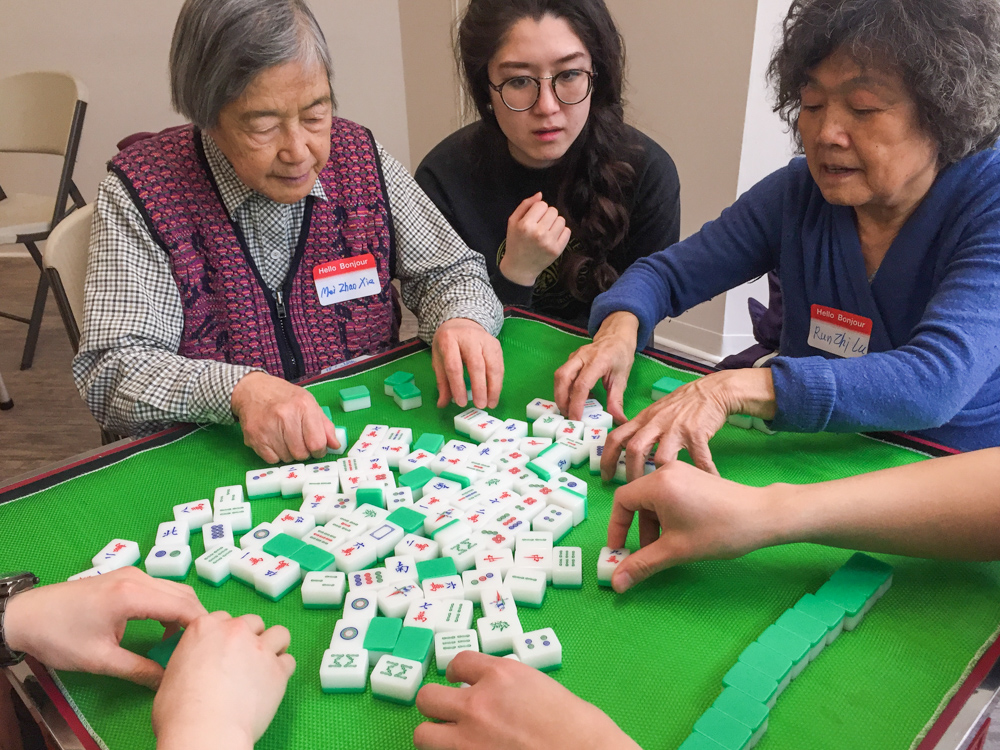 They were tucked in Room 109 at the Bronson Centre. Five rectangular tables filled with domino-like tiles were surrounded by participants of various ages.

A few dozen people from Ottawa’s Chinese community gathered on April 7 to play mahjong and reconnect with their heritage. Organizers saw this event as a way to bridge the gap between young people and local seniors who often don’t speak English and can find themselves isolated.

Amy Yee, co-founder of the Chinese Canadian Collective and an event organizer, said the idea came from suggestions among Chinese youth, particularly people who wanted to learn to play mahjong.

Yee said the event was “a really fun opportunity to bring youths and seniors together.”

She added: “A lot of the youth, like me, have no idea and have never played before. So a lot of it is teaching.”

Mahjong is a tile-based game originating in 19th-century China that has gained popularity internationally over the years.

Today in Canada, it’s mainly known as a game played by Chinese seniors to pass the time. The game is similar to gin rummy and dominoes, but to win the game a player must collect three to four consecutive tiles of the same suit.

Yee said the plan was to get the seniors to teach younger attendees how to play mahjong, even if there’s a language barrier.

The CCC is an Ottawa-based non-profit organization dedicated to “examining people of Chinese descent’s experiences, issues and representation.” It currently targets youth who are looking to reconnect with their Chinese heritage.

Yee said the CCC is partnering up with the Kanata Chinese Seniors Support Centre to also bridge the intergenerational gap among people of Chinese descent in Canada.

Wen Jean Ho, co-founder of the KCSSC, said she’s glad the CCC reached out to her to make this event happen.

“I’m happy to see the younger generation becoming more and more involved in helping the Chinese community,” she said, speaking in Mandarin. “It’s a good opportunity to bring friends, their children and grandchildren’s relationship back together.”

Ho said this type of event is needed because Chinese seniors sometimes face a lot of social isolation after arriving in Canada. Many came to Canada in the 1990s, she said, to help raise their grandchildren, but never learned English.

Ottawa senior Gui Rong Wang  said she was very happy to be at the event.

“Instead of being at home, we’re here and we’re meeting new friends,” she said, speaking in Mandarin. “Usually I participate in events only involving seniors, but now I’m seeing young people, I feel very happy.”

Yee said the CCC won’t be organizing any other events anytime soon because it is still building its board of directors to figure out its mandate and goals.