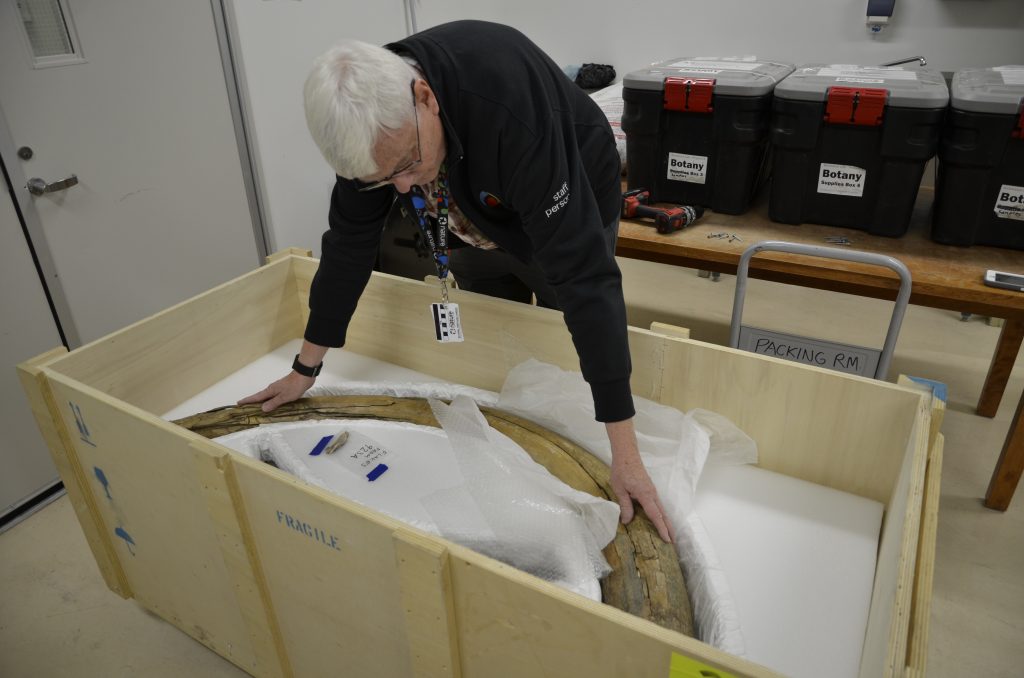 After an FBI investigation that spanned nearly four years, two mammoth tusks that were illegally acquired in 1960 in northern Canada have been repatriated to this country from the United States and are now in the care of the Canadian Museum of Nature.

The return of the tusks came after the FBI began a probe into the holdings of Indiana collector Don Miller in 2014.

“The FBI began to realize that some of this material had been obtained illegally,” said Smythe.  “So they started to figure out how to repatriate them.”

Miller, who passed away in 2015, had told the FBI that he acquired the tusks during a trip between Calgary and the Yukon-Alaska border.

“We don’t know exactly where they’re from or the environment in which they were taken,” Smythe said.

Miller had originally thought that the tusks were from mastodons. But after taking small sections from each tusk and examining the patterns of their inner layers, Dr. Danielle Fraser, a research scientist in palaeobiology at the museum, was able to determine that the tusks belonged to mammoths.

Fraser said that the 1.5-metre-long tusks are likely between 12,000 and 20,000 years old. She added that they are of good scientific value, as they can help to determine the mammoth’s natural history.

“What’s really cool about tusks, teeth, bones and things like that, is as they’re growing, it records what you’re eating and drinking, and it records stuff about your external environment,” Fraser said. “It can actually tell you about the environment that these animals lived in and the types of food it was eating.”

Wooly mammoths were large, plant-eating mammals that belonged to the family Elephantidae, an ancient relative of the modern elephant.  The two animals diverged between five and three million years ago to form three subdivisions in the family: Loxodonta (African elephants), Elephas (Asian elephants), and Mammuthus, which includes several extinct species of mammoths.

Mammoths were commonly found in parts of North America, Asia, Africa and Europe, from about five million to 5,000 years ago, after the end oft the last Ice Age. In Canada, mammoths were most prominent in the Yukon, Alberta and other northern landscapes about 30,000 to 40,000 years ago.

The rapidly changing environment and increased human predation led to their extinction about 10,000 years ago.

In order to find an appropriate home for the tusks, said Kay Mayfield, the public affairs officer for the U.S. Embassy in Ottawa, FBI agents in Indianapolis got in contact with the embassy’s FBI attaché, who then reached out to the RCMP.

“The FBI was really determined to do the right thing and get the tusks back to Canada and back into the hands of an appropriate organization,” she said.

Mayfield said the U.S. Embassy then connected with the Canadian Embassy in Washington, D.C. She said the Canadian diplomats there were “terrific and really enthusiastic about working on this project.”

She added: “We also reached out to the Canadian Museum of History, because we understood that artifacts like this belong to the province where they were found, but the problem was the collector could not remember where he had found them.”

The history museum turned the case over to the Canadian Museum of Nature, which Mayfield said proved to be the ideal organization to handle it.

“We wanted to make sure that it would be somebody who could figure out scientifically and legally appropriately what should happen to these artifacts,” she said.

Fraser said that she was happy to see the tusks back in Canada, especially in this time of trade conflicts and various political tensions across the border.

“It’s a really great example of agencies from two different countries cooperating to bring back a piece of Canada’s natural history,” Fraser said.

Similarly, Mayfield said that she was proud to see the dedication and determination demonstrated by agencies from both Canada and the U.S.

“There was not a hiccup along the way. There was such a spirit of cooperation and dedication to the outcome,” Mayfield said. “A lot of people worked together to piece together this story and figure out what the right thing was to do, and then did the right thing. You can’t get a better outcome than that.”

The tusks are currently housed in the McLeod Street museum’s Research and Collections Facility in Gatineau, where they will be kept for an indefinite period for future research and reference, according to Smythe.

However, he added that the tusks will be on display during the research and collections annual open house event on Oct. 13.