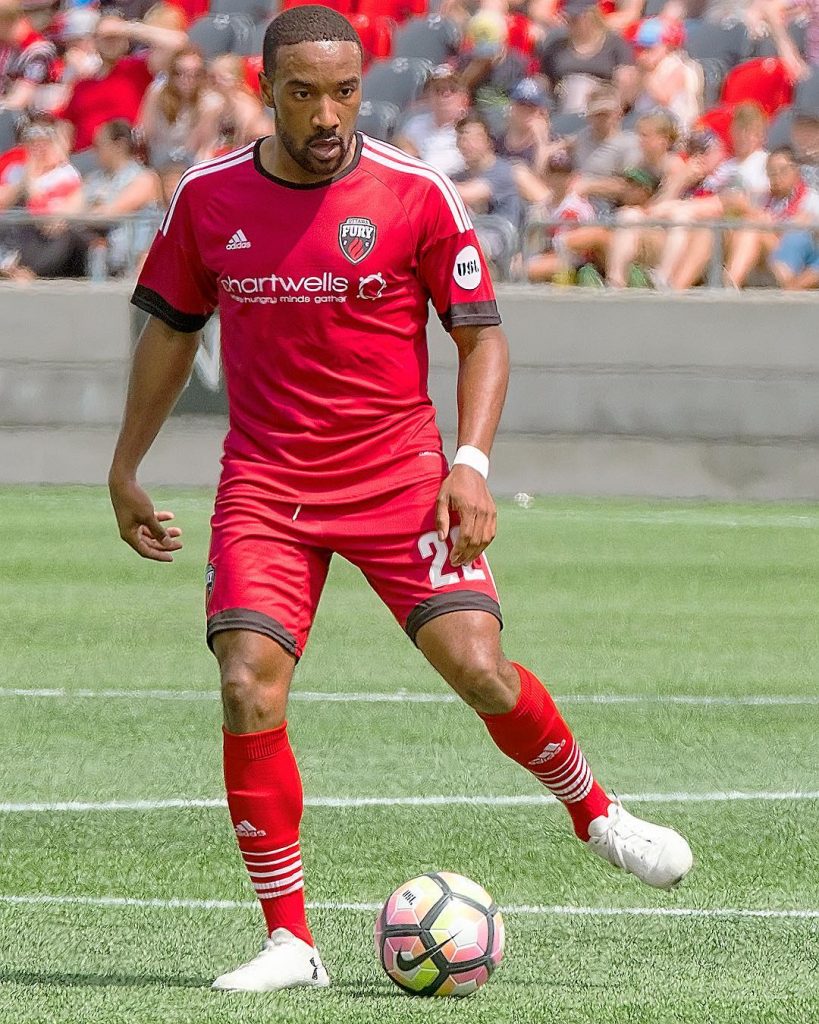 One of Centretown’s brightest soccer stars of all time is returning to the pitch this spring for the Ottawa Fury — and he’s bringing an impressive accolade with him.

Jamar Dixon, 28, was recognized as the Ottawa Fury’s 2017 Player of the Year. It was an accomplishment that Dixon said he never expected, but was honoured to receive.

Dixon began his playing days as a youth member of St. Anthony’s Soccer Club and the Gloucester Hornets before playing professionally in Sweden and Finland. In 2016, he returned to Canada to play for the Fury and even suited up for Team Canada in three international matches.

Julian de Guzman, one of Canadian soccer’s most recognizable stars and current general manger of the Ottawa Fury, was impressed by his initial meeting with Jamar and recognized the young man’s talent.

“He’s one of those diamond-in-the-rough players that have been around for a long time in Canadian soccer,” said de Guzman.

Dixon played 28 games in 2017 for Ottawa, including 21 starts, during the Fury’s first season in the young United Soccer League, which was founded in 2011 and is just one step below the top tier of the sport in North America: Major League Soccer.

The Fury finished 10th in the USL standings, two spots short of a playoff berth in the 33-team league. Dixon said he was disappointed with the Ottawa club’s finish, but still had many positives to take away from the Fury’s inaugural USL season.

“It’s a learning curve, it’s a new league and a lot of people didn’t know what to expect. But I know we didn’t lack any hard work,” said Dixon.

As one of the leaders on the Fury squad, Dixon instilled a strong work ethic around the locker room that he hopes will extend into the 2018 season.

“You can’t beat hard work, you just can’t,” said Dixon. “I told everyone that you’ll be playing guys who will be working just as hard as we’re working. That was the key for the season for me, and everyone was relentless.”

Dixon could be described as an iron-man for the Fury, as his consistent play and sheer amount of playing time warranted the Player of the Year award. His team-first mentality was instrumental in his emergence as one of the most talented midfielders in the USL.

“For what he’s done in his professional career I think he still has more to offer. I don’t think we’ve seen the best of Jamar yet,” said de Guzman, reflecting on the player’s 2017 season.

After growing up in Ottawa, Dixon said he’s thankful for the opportunity to wear the jersey of his hometown team.

“Not everyone has a team in their city and especially in Canada, where we lack the football pyramid.”

But most importantly for Dixon, the pressure of performing in front of family and friends forces him to bring his game to another level.

“It’s bigger than just a game to me. This is something you dream about as a kid. I feel like I have no choice but to give it everything I have,” said Dixon.

Along with the USL season, the Fury will be competing in the 2018 Canadian Championships. Last season, the Fury surprised many and made it to the semi-finals in a matchup against eventual MLS champions, Toronto FC.

Even more surprising was the Fury’s 2-1 win at Lansdowne Park in the first game of the semi-final series against Toronto, before a Game 2 defeat and series loss on total goals.

But Dixon said this year will be different because of the 14 Canadians that will be on the Fury squad.

“It’s going be extra special this year, especially because of the number of Canadians we have on the team,” said Dixon. “It’s incredible.”