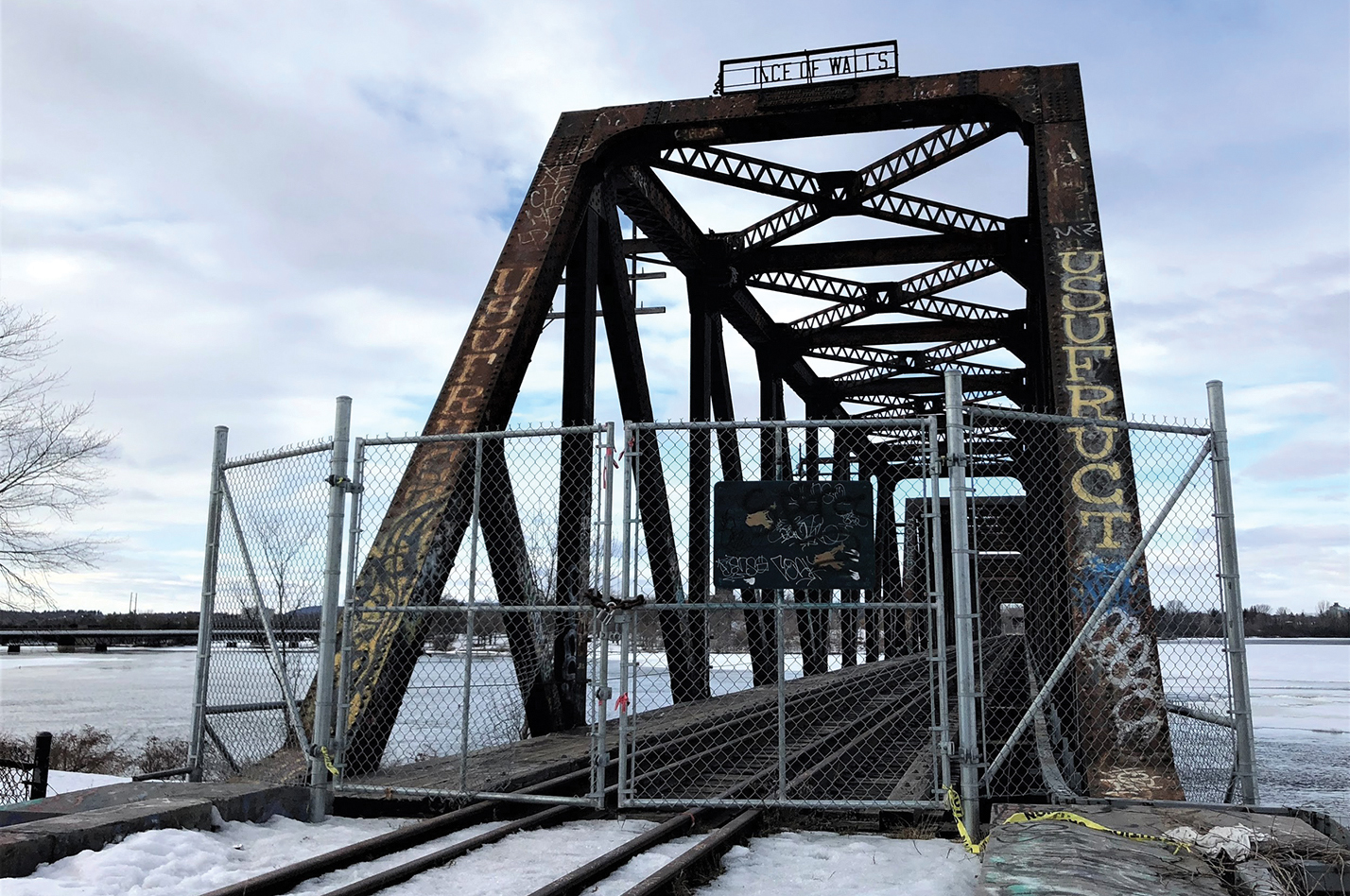 The broken sign atop the bridge could be an indicator of things to come. Photo: Samuel Berube, Centretown News
April 14, 2018

The clock is ticking for the City of Ottawa to decide on the future of the Prince of Wales bridge. Despite efforts to delay the project, the April 28 deadline imposed by the Canadian Transport Authority is still in effect.

Developers have presented plans of their own to refit the old bridge, notably Joseph Potvin’s Moose Consortium, though the city is pushing back against them. The city says it envisions the bridge purely as a rail connection over the river. However, it has not presented a concrete timeline for a potential rebuilding project.

Whether the city chooses to keep the bridge or sell the project to a developer remains to be seen. It does appear, though, that maintaining the bridge true to its over century-old history is a key priority for heritage advocates and engineers alike.

The Prince of Wales bridge currently sits abandoned, exposed to the weather and trespassers. Forgetting for a moment that the future of the bridge is a mystery, questions have been raised as to what it would take to refurbish the iron giant, and how could a developer refurbish it to modern standards while maintaining the heritage of a 138-year-old structure.

David Jeanes, president and chair of the board for Heritage Ottawa, said the bridge is not on any kind of heritage registry in the city, thereby leaving it vulnerable to potential remodeling or even demolition.

“The Federal Heritage Railway Stations Protection Act does not apply to bridges or other types of railway buildings,” Jeanes said. “There is a provincial registry of Heritage Bridges, but it only applies to bridges owned by the Province.”

Grant Vogl, collections and exhibitions manager at the Bytown Museum, stressed the importance of protecting the heritage of old structures. “When any historical structure is lost due to age, fire or modernization, its physical place in history is lost and we are left with only photographs or the occasional commemorative plaque,” he said.

“We lose the original intent of the architect and how the [structure] interacted with the neighbourhood and surrounding structures,” Vogl said.

Greg Remisz, VP/Finance & Business Development at Remisz Contracting Engineers Ltd., works with Moose Consortium. His organization presented a plan to refurbish and refit the bridge according to Moose’s ideas.

“The objective of our project is to add a pedestrian and cycling pathway to Prince of Wales Bridge and Lemieux Island without interfering with the utility of the existing railway line, involving minimal intervention and respecting the heritage value of the structure and location,” Remisz said.

“Since this is not a detailed design yet,” Remisz said, “we only considered the practicality of using various materials – or their combination – in order to reduce overall weight and to have a nice looking finished product.”

Jeanes said if the bridge were to be torn down, the city would lose “the only feasible rail link between Ottawa and Gatineau.” He said the steel structures would need immediate repainting to cover up the graffiti that trespassers have tagged it with, but they are still solid and there is no sign of structural damage. “The bridge is worth conserving,” he said.