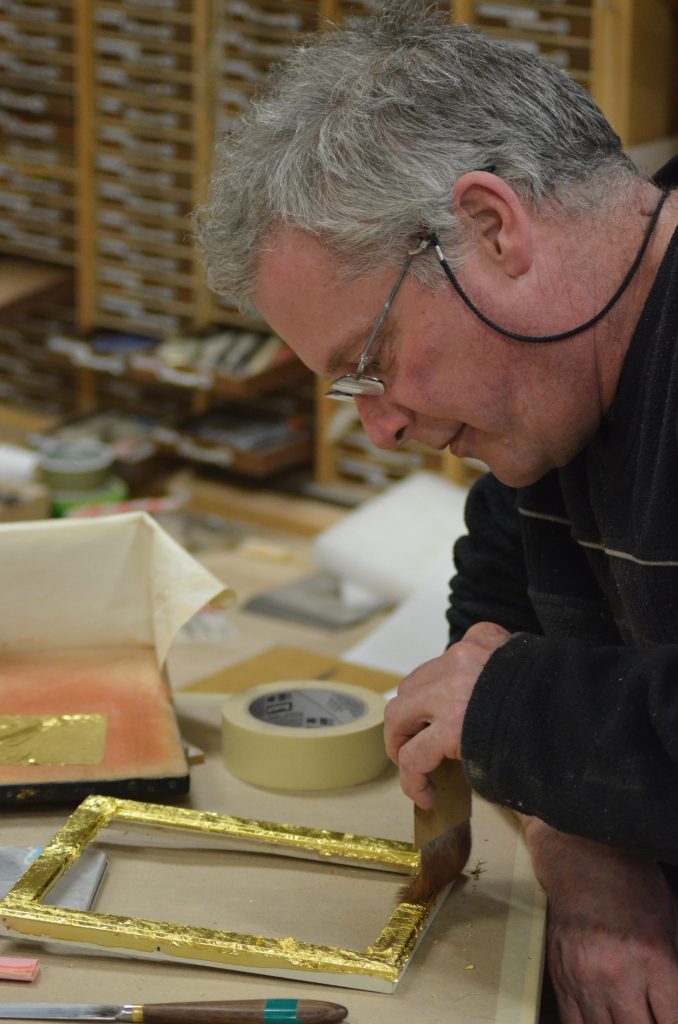 Paul Champion-Demers has worked in the presence of dignitaries and high-profile politicians in Canada’s capital for most of his life.

The 58-year-old artisan has practised his trade for Library and Archives Canada, the National Capital Commission, the Parliament Buildings, Canadian Conservation Institute and the Canadian Museum of History.

His profession? Champion-Demers is an independent gilder, or specialist in giving precious objects a golden shine. It’s a rare skill with a rich history.

Gilding is the process of applying gold leaf or gold paint onto ordinary objects in order to give them a more luxurious look. As early at 2300 BCE, ancient Egyptians gilded objects such as coffins and tombs.

In the more recent Victorian era, objects were gilded as a show of class.

Based in Fitzroy Harbour, about 40 kilometres west of Parliament Hill, Champion-Demers has been gilding for almost 30 years. “I apprenticed with an experienced gilder when I was young,” he said, “but after a while I became self-employed. I do all my work at home and that allows me to raise my kids.”

So, how exactly does gilding work? “The process of gilding is based on the buildup of adhesive structures,” said Champion-Demers. “You start with your carved wooden surface and apply rabbit skin glue to the wood surface. This seals the wood and prepares the first surface to accept the gesso.”

Gesso is a white paint-based mixture that is applied in five to eight coats to build up the surface, which is then sanded smooth. “Once the gesso is smooth you can apply a gilder’s clay over the gessoed surface to prepare the frame for water gilding. You always do the water gilding first and the oil gilding second.” After that step, the gilding is toned down and the object is set aside.

Rebecca Bunch, the NCC’s conservation and collections specialist, says Mr. Champion-Demers has helped restore several NCC-owned heirlooms, including an 8-by-5-foot gilded mirror. “Paul has helped us out a lot. He does a great job, and really knows his craft. He’s even given me a few pointers on how to gild things myself.”

One of Champion-Demers’ favourite projects was regilding a mirror outside a Rideau Hall bedroom used by Queen Elizabeth. “That was neat, regilding the Queen’s beautiful old mirror. There are a lot of lovely pieces of furniture that I’ve gotten to work with, but that was one of the coolest.”

Champion-Demers’ experience as a gilder has led him to interactions with some of Canada’s most notable political figures. “I do a lot of work at Rideau Hall, so I’ve spoken to the Governor General a few times. I’ve met a couple Governor Generals in the past, usually to figure out what they’re looking for when I come to do a job.”

On the side, Champion-Demers is a volunteer firefighter for the City of Ottawa. “I’m part of the daytime response team. We focus on water rescue, which can lead to some pretty scary situations.”

In early March, Champion-Demers and his team got a call about a man who had driven his car onto ice. “The man had tried to leave, and fallen in the water,” he says. “We pulled him out and somehow, he survived it all.”

Champion-Demers’ biggest passion, though is his day job: helping restore worn pieces of history to their former glory through gilding.

“Gilding is a fascinating experience. People always love to see how it’s done. I’ve always enjoyed it and I’m proud of what I’ve been able to accomplish.”

This story was produced in collaboration with Artsfile.