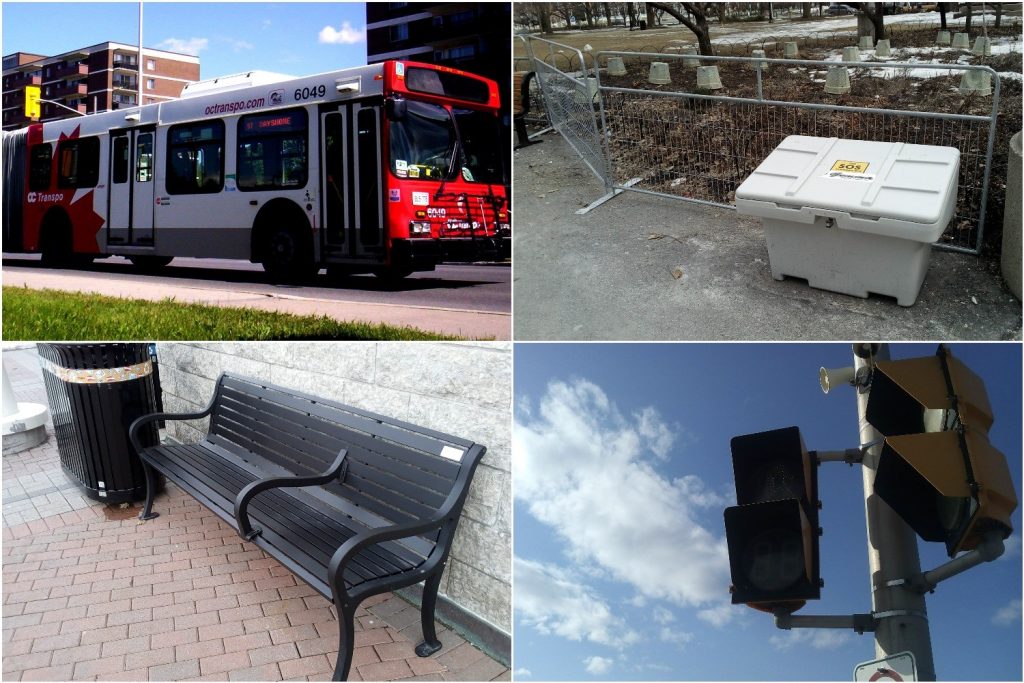 Ottawa has enacted several measures as part of its Older-Age Plan. (Clockwise from the top right) A total of 81 grit boxes have been placed around the city to prevent slipping in the winter; Walk lights in areas with high numbers of seniors have been extended; Dozens of accessible benches have been installed around the city; OC Transpo offers discounted senior rates, free rides on Wednesdays. Photo: Connor Oke, Centretown News/Public Domain
April 14, 2018

Ottawa seniors like Frank Rousseau benefit from a variety of services offered by the city: discounted bus fares and free Wednesday rides, housing assistance and more.

In recognition of the city’s work with its seniors, the provincial government presented Ottawa with an Age-Friendly Community Recognition Award on March 26. The Ontario Minister of Senior Affairs Dipika Damerla presided over the special ceremony in Toronto, during which several municipalities were honoured.

Ottawa received its award for the development of its Older-Adult Plan, created in 2012 and updated in 2015. The plan sets out several areas of action to make the city more accessible for seniors like Rousseau, including in transportation, housing and health services. But the city isn’t resting on its laurels – it will soon be starting consultations for the third edition of the plan.

“I can tell that they’re trying to improve things, which I appreciate,” said Rousseau, a retired accountant who uses discounted OC Transpo services. “I live downtown, so it isn’t difficult to get around, but I could understand it being more of a challenge for folks living further away.”

Some of the Older Adult Plan’s measures are significant, such as offering discounts and free rides with OC Transpo, or investments in affordable housing. Other measures are more modest, such as installing new age-accessible park benches, or cutting curbs to lower tripping hazards.

“One thing we heard from older adults is really not knowing enough about the kinds of services that are available, so we developed an older adult services guide for older adults who may not be online and know how to search,” said Clara Freire, who managed the city’s development of the Older-Adult Plan. “It’s really worked in connecting people. Ottawa has quite a committed city council and staff group, and a very transparent process that really works well here.”

The city worked closely with Ottawa’s Council on Aging to develop and implement the plan.

“We appreciate the leadership and commitment of the city to the Older Adult Plan,” said Bonnie Schroeder, the council’s program director for the Age-Friendly Ottawa initiative. “We wrote a letter of recommendation on behalf of the city for the application. We’re just so proud to be a part of a city that’s committed to seniors.”

But Schroeder said there’s always room for improvement, as the city can do more to help seniors stay independent.

“Health has always been a big concern, but we also need to ensure there’s access to affordable housing where seniors can be independent. We also need to make sure seniors are able to get around and have access to information for retirement planning and accessing services,” she said.

Eric Manherz, runs a senior’s web service — ottawaseniors.com – and said that Ottawa is a good city for the elderly.

“There’s so many services and a good community, and lots of retirement homes if people want them,” Manherz said. “One thing that we need to do more of is giving access to information that lets people find stuff on their own. I think that helps them stay in the house. That’s what my site is trying to do.”

According to census data from 2016, just over 15 per cent of Ottawa residents are over the age of 65, which is slightly below the Canadian average of 17 per cent.

This number is expected to grow in the next few years. By 2021. around 16.3 per cent of the city will be over the age of 65, as baby boomers continue to retire.

“In the next 20 years, the population growth of older adults is expected to double in Ottawa,” Mayor Jim Watson said in a news release from the city. “We will continue to invest in projects like our Older Adult Plan to ensure the city has the infrastructure and programs to support this growing population.”