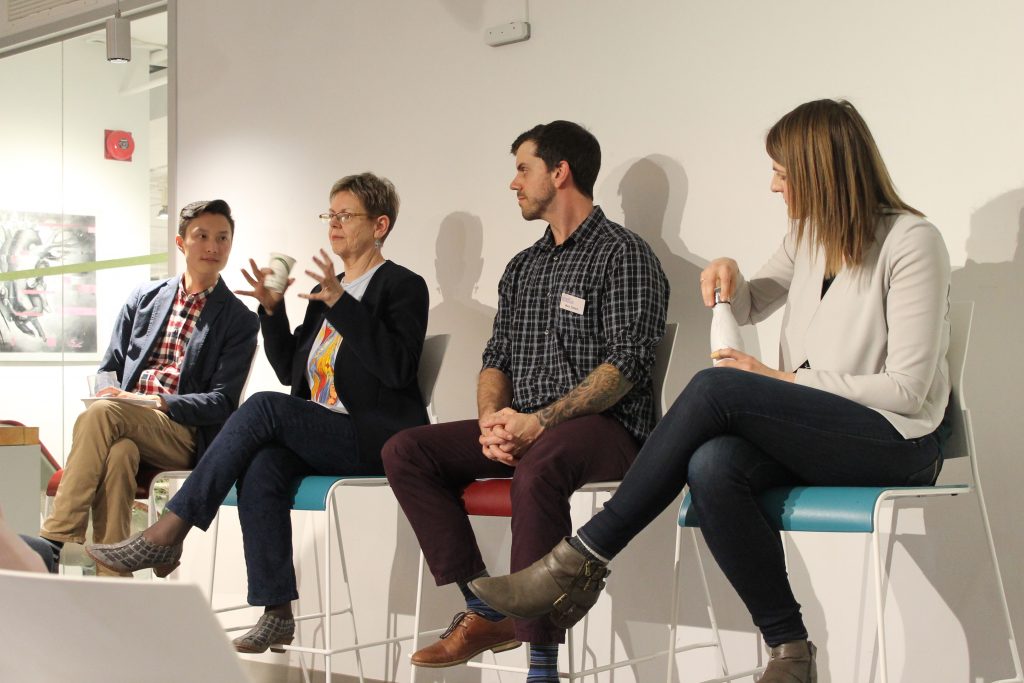 Ottawa needs to take more chances if it wants to fully address the issue of homelessness, a group of social workers and policy experts said at a recent panel on the subject.

“I think Ottawa can be a bit risk-averse and we need some public champions who can try new things,” Kaite Burkeholder Harris, a member of the Canadian Observatory on Homelessness, said during the March 28 event at Impact Hub.

The event was timed to coincide with the release of a report on the halfway mark of Ottawa’s 10-year plan to end homelessness. Speakers included representatives of Cornerstone Housing, the Ottawa Mission, and the Canadian Observatory for Homelessness.

Panelists said there has been an impressive drop in chronic homelessness, but they still have serious concerns about the number of families staying in shelters and subsidized motels. They attributed the increase to the number of asylum seekers and other newcomers to the city.

Burkeholder Harris said so-called inclusionary zoning – essentially requiring developers to earmark a certain number of affordable units in all new housing projects – could do a lot to help eradicate homelessness in Ottawa.

She encouraged the city to make this a major economic incentive for developers.

“You’re going to get greenlighted faster at City Hall to build your building because you have affordable units in it,” Burkeholder Harris said.

Sue Garvey, director of Cornerstone Housing for Women, said funding should be directed towards providing affordable housing in other parts of the city, not just the downtown core.

For Garvey, creating diverse communities instead of centralizing homelessness efforts within the inner city should be a priority.

“I think that as a city we’re really hoping that we can move into a place where we won’t have to rely on Centretown to hold all of the affordable housing in the city,” Garvey said.

According to the report there are more than 10,000 people on the waiting list for affordable housing in Ottawa.

Garvey emphasized the Housing First Initiative, through which the city has housed 519 people and has seen 85 per cent of those people still housed after six months in the program according to the committee report.

She said in the past months Cornerstone Housing for Women has made affordable housing its number one goal instead of focusing on emergency shelters, which she describes as only a band-aid solution.

The group currently operates several homes in Centertown to provide emergency shelter for homeless women and those who can’t afford current market rents.

Cornerstone Housing for Women has been working since 2014 to convert the Sisters of Jeanne D’Arc Institute “mother house” on Princeton Avenue in Westboro into 42 bachelor rental suites for women.

Garvey said the project should be completed within the next two months.

For James Chan, the program lead at Impact Hub, an important solution is shattering the stereotypes often associated with homelessness.

This is why his team at Impact Hub is organizing a homeless simulation, to allow more than 100 people to role-play what it’s like to live in the shelter system.

“We’ll give participants the profiles of real life people and the participants will follow the system, basically putting themselves in the shoes of people living in poverty,” Chan said.

Chan says the simulation is set for Saturday, May 12 and will be a large-scale event taking place in Centretown.