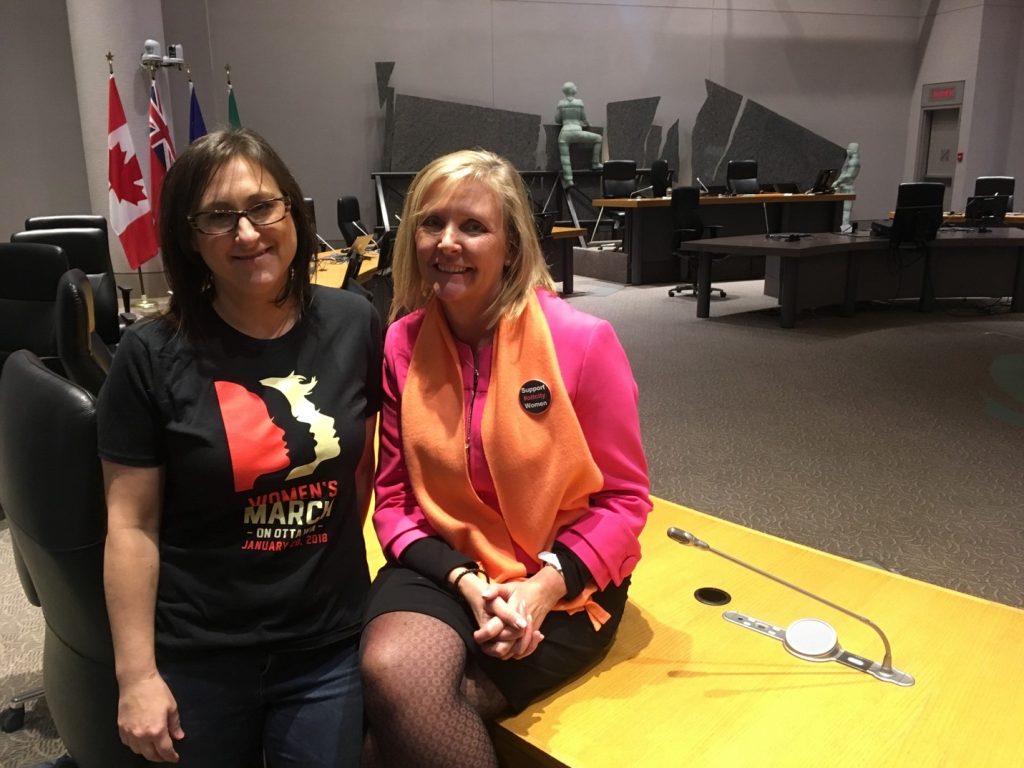 Ottawa city councillors voted on March 28 to create a new Women’s Bureau and Council Liaison on women’s issues. This would establish a new framework that looks at Ottawa issues through a gendered lens.

“I think across the entire corporation, from public transit to transportation policy to social policy to urban planning and everywhere in between, a gender lens can change the direction that we’re taking,” Gloucester-Southgate Coun. Diane Deans said during the meeting.

Deans proposed the creation of the bureau with support from Somerset Coun. Catherine McKenney.

The hope, said Deans, is to embed a gender equity lens into all policy development that the city does in the future. Only four out of 24 Ottawa city councillors are women.

Deans said the atmosphere in the room after the announcement was “hopeful and excited.” Supporters of the motion wore peach scarves in solidarity with the City for All Women Initiative or CAWI, a local organization that works closely with municipal policy makers to promote inclusivity and gender diversity in Ottawa, according to CAWI program officer, Fathiya Warsame.

Warsame said the motion being passed was a great first step, but that she hoped the bureau itself would highlight diversity and make sure the voices of marginalized women were heard.

Deans said the meeting was put on pause to take a photo with CAWI organizers who supported the motion. “They’ve been working in gender and equity issues in the city for 14 years and I think today’s a milestone for them and they could see the forward momentum that has been created here,” she said.

Lyra Evans, the Ontario NDP MPP candidate for Ottawa-Vanier, said as a woman in politics, she feels the bureau could be a stepping stone in breaking down barriers for women to enter the world of public policy.

“I’ve had a very difficult time finding campaign staff who have not been snatched up by successful men’s campaigns in nearby areas,” said Evans. For her, as a first-time candidate, fleshing out a full team has proven difficult.

“I assume that other women who are just beginning to run and haven’t had a lot of engagement in political spaces before would have very similar difficulties,” she added.

Evans said she hopes the bureau might encourage other women to come forward and get the support that they need in creating a campaign and choosing to run. “I hope that this bureau will make the barriers of entry for women into politics less, because as a woman in politics, it’s hard,” she said.

The meeting did not address what the formal structure of the bureau will look like.

Ideas for the implementation of the bureau will be discussed as part of the governance report for the 2018-2022 term of city council.