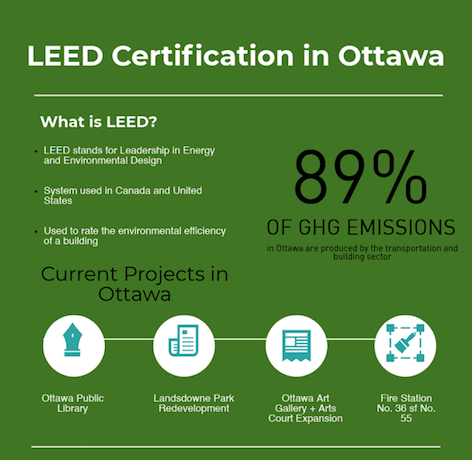 Recent updates to Ottawa’s Green Building Policy have been criticized for ignoring smaller buildings in the move to continue to bring larger buildings up to more energy efficient standards.

The updates on the Green Building Policy were outlined in a presentation by the director of infrastructure services, Alan Gonthier, at a meeting of the environmental stewardship advisory council held on March 29.

The current Green Building Policy, which was approved by council back in 2005, only requires all new buildings with a footprint greater than 500 square metres to be built to the LEED (Leadership in Energy and Environmental Design) standards.

LEED is a rating system used in the U.S. and Canada as a way to measure the environmental sustainability of a building. The system is based on a point system: buildings are rated higher for incorporating more green design in categories such as optimizing energy performance, using environmentally friendly materials and resources and using innovative design processes.

Increasing the efficiency of buildings in Ottawa is one of many projects being discussed in the city’s move to reach its goal to reduce greenhouse gases (or GHGs), by 2050, to 80 per cent below 2012 levels. These pledges were created following the federal government’s ratification of the Paris climate accord in 2016.

ESAC member Bill Eggertson gave some constructive criticism following the Green Building Policy presentation. His first complaint was with regards to the fact that LEED certification is only been applied to buildings over a certain size in Ottawa.

“You are missing one hell of a lot of municipal buildings. I encourage you to go below 500 square meters, consider all buildings.”

Eggertson also said the amount of energy being saved by LEED is difficult to track compared to other energy saving systems.

“How much energy are we saving, how much greenhouse emissions are we reducing?”

“LEED is good from an aesthetics value, niceness point of view, but it sucks when it comes to actual tracking in emissions,” he added.

Following the feedback, Gonthier was given a chance to address the issues.

He pointed out that while smaller buildings in Ottawa aren’t going for LEED certification, the industry has evolved towards more environmentally-friendly methods.

“Everything we do we’re trying to seek environmental sustainability,” he said. “Whether or not we’re seeking a form of certification or not, doesn’t change the approach that we bring to our building practices,” he said.

He also mentioned that the city is looking into other kinds of certification systems, such as Energy Star, that may be able to track the amount of energy buildings are saving more effectively than LEED.

Heather Dunlop, a volunteer from Ecology Ottawa, attended the meeting to increase her knowledge about the city.
“I was pleased to hear that they were moving ahead with the LEED certification, and I agreed with Bill Eggertson that I believe that more should be done for the small buildings,” said Dunlop. “I think they could do a lot more but I think it’s a start.”

Eggertson’s final thoughts on the presentation were echoed by others in the room.