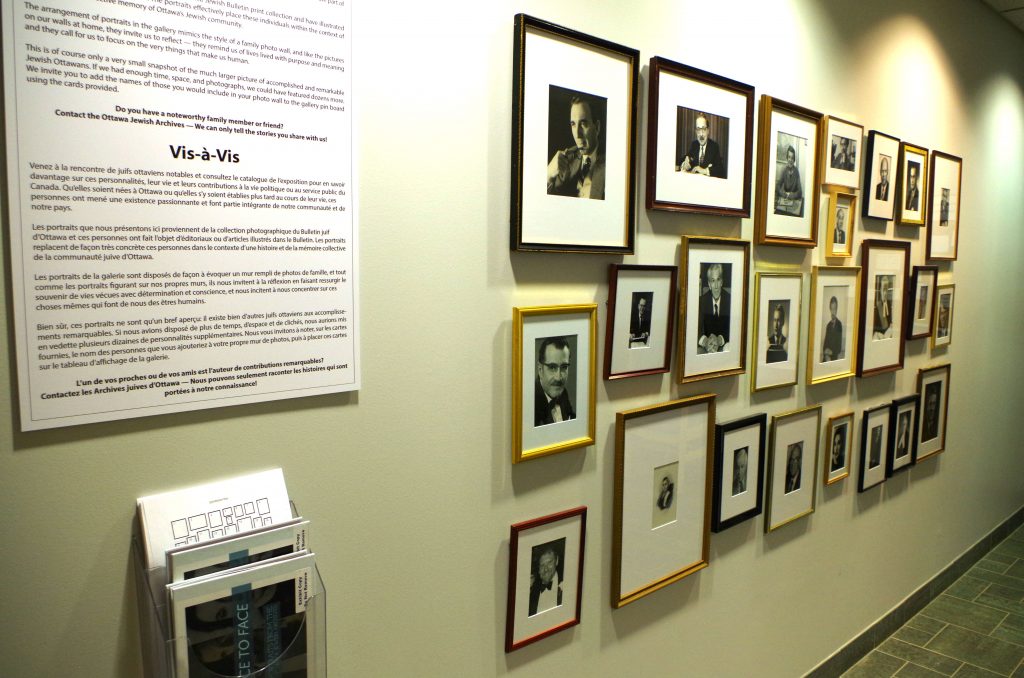 The exhibit titled Face to Face is set up to be reminiscent of a family’s wall of photos to reinforce the ideas of interconnectedness, community and family roots. Photo: Evelyn Myers, Centretown News
April 14, 2018

A new exhibit showcasing Ottawa’s Jewish history — and coming in June to the Bytown Museum — is designed to look like a collection of family photos in the living room, a nod to the interconnectivity of Ottawa’s Jewish community.

The exhibit, Face to Face, was created by the Ottawa Jewish Archives last year as part of the Canada 150 celebrations, and has been on display at the archives’ downtown locale.

It is the culmination of three major modernization projects that have been in the works for a while at the Ottawa Jewish Archives, said Saara Mortensen, the organization’s archivist.

The exhibit is comprised of framed photographs arranged like a family’s photo wall, a reference to how the Jewish community in Ottawa is like a big family, said Mortensen, who curated and mounted the exhibit. “I wanted the arrangement of the portraits to be pretty informal and to look like an arrangement of pictures that you’d see in somebody’s living room,” she said.

The exhibit includes a catalogue which reproduces the photographs and gives a short biography and when possible, reproduces clippings from the Ottawa Jewish Bulletin.

“One of the lovely things about this exhibit is that it showcases the little treasures that are in the Jewish archives here in Ottawa,” said David Dean, professor of history at Carleton University and co-director of the Carleton Centre for Public History. Bringing the exhibit to the Bytown Museum helps remind us of Ottawa’s enduring diversity, he said. This message is especially important with the current political climate and worries about immigration, he said.

“The exhibition serves to give exposure to the collection of the Ottawa Jewish Archives and the Jewish community as a whole,” Grant Vogl, collections and exhibitions manager at the Bytown Museum, said in an email.

The exhibit highlights contributors to civic life, such as former mayor of Ottawa Lawrence (Lorry) Greenberg. It also spotlights lesser known members of Ottawa’s Jewish community, such as Freda Paltiel, who devoted 20 years to gender equality and social equity policy and programs in Canada and abroad.

“Everyone really does have a really remarkable story,” said Mortensen.

It was hard to narrow the archive’s collection down to the 24 people who are featured in this exhibit, Mortensen said. As a result, there are many who have made incredible contributions that weren’t included, she said, adding that she could put together a similar exhibit with a different theme, like arts and culture or sports, every year.

“These accomplishments didn’t just serve one group,” said Mortensen. “There are people who have made Canadian society better for everyone.”

The Jewish Federation of Ottawa had the final say in who was included in the exhibit. Five main criteria guided their selection of subjects. The contributors had to be from Ottawa or have spent a considerable amount of time here. All those featured are deceased and contributed in the fields of politics and public service.

It’s important to have exhibits like this one because we often know we have access to these things now but don’t know how they came to be implemented, Mortensen said. This exhibit helps people put a name, a face and a time period to these accomplishments to see how this country has evolved into what it is today, she said.

The exhibit is at the Ottawa Jewish Archives until May 31. It will be on display at the Bytown Museum from June 8 to Sept. 30.