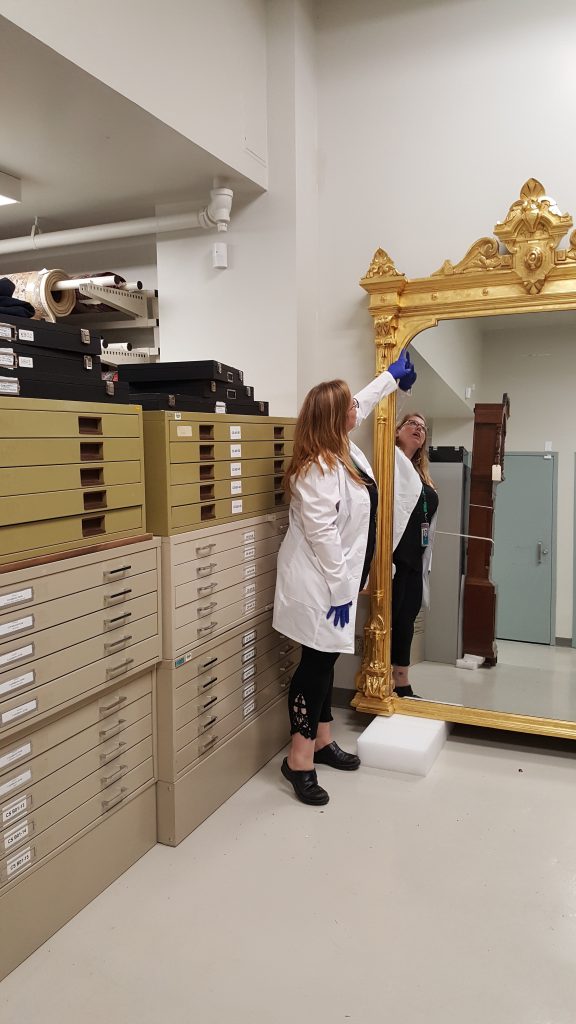 In the vaults of the National Capital Commission lie some of Ottawa-Gatineau’s most prized keepsakes, known as the Crown Collection. The collection is reflective of Canada’s British, French and Indigenous history, and contains everything from fine art, books and textiles to ceramics and furniture.

The Crown Collection has grown over the years through donations and Government of Canada purchases and transfers, and is now made up of 4,228 interior and exterior pieces, some of which date back to the 18th century.

One of the more interesting artifacts in the collection is an 8-by-5-foot gilded mirror. It was recently restored and awaits eventual placement in one of the six official residences maintained in the capital by the NCC, including 24 Sussex Drive (the official Prime Minister’s Residence) and Rideau Hall, home of the Governor General.

“Mirrors like this were common in large stately homes,” said Rebecca Bunch, the NCC’s conservation and collections specialist. “This one is particularly beautiful. It’s a Victorian-era piece of furniture, and it’s big.”

The mirror, Bunch’s favourite piece in the Crown Collection, came to the NCC in 2005. Due to privacy concerns, Bunch said she can’t discuss the mirror’s various owners, but did note that it arrived at the NCC through a program called the Canadiana Fund.

The Canadiana Fund is an NCC program that facilitates the donation of exceptional items like the mirror to be showcased in NCC-maintained residences throughout Ottawa-Gatineau.

When the mirror wound up in the hands of Bunch, it couldn’t have been put on display.

“Gilding had come off over time because of cleaning. Back in those days, housekeepers would clean the furniture with damp, water-soaked rags, but that takes the gilded coating off. The gilding was eventually covered with bronze that began to oxidize over time.”

While the mirror’s final location has yet to be decided, Bunch speculated that it could go into a large residence like Rideau Hall.

“The mirror was designed to fit into the larger rooms of a big house of grand rooms, so we’ll need to take that into account. Rideau Hall seems like it would be the perfect fit.”

Bunch said the NCC also has to be careful not to position the mirror too close to the floor.

“It wasn’t designed to sit on the floor, so there’s the risk of it getting bumped a little bit when visitors to Rideau Hall go up to take a look at it.”

Bunch, along with a team of other heritage experts, is in charge of preserving the mirror and other items in the NCC collection. She has been interested in the conservation of heirlooms since 1997, when she enrolled in Algonquin College’s museum studies program.

“I constantly did internships,” said Bunch. “Eventually I wound up at Museum of History (then the Canadian Museum of Civilization) for a three-month internship. I kept showing up and working for free until they hired me.”

After working at several institutions for a decade, including contract work with the Canadian War Museum, a position opened up at the NCC for a new conservation specialist. Bunch leapt at the chance.

Does Bunch have a favourite besides the large gilded mirror?

“There’s a gilded marble-top table in the collection that I really like,” she said. “I’m re-gilding it myself, so that makes the work that much more exciting.”

This story was produced in collaboration with Artsfile