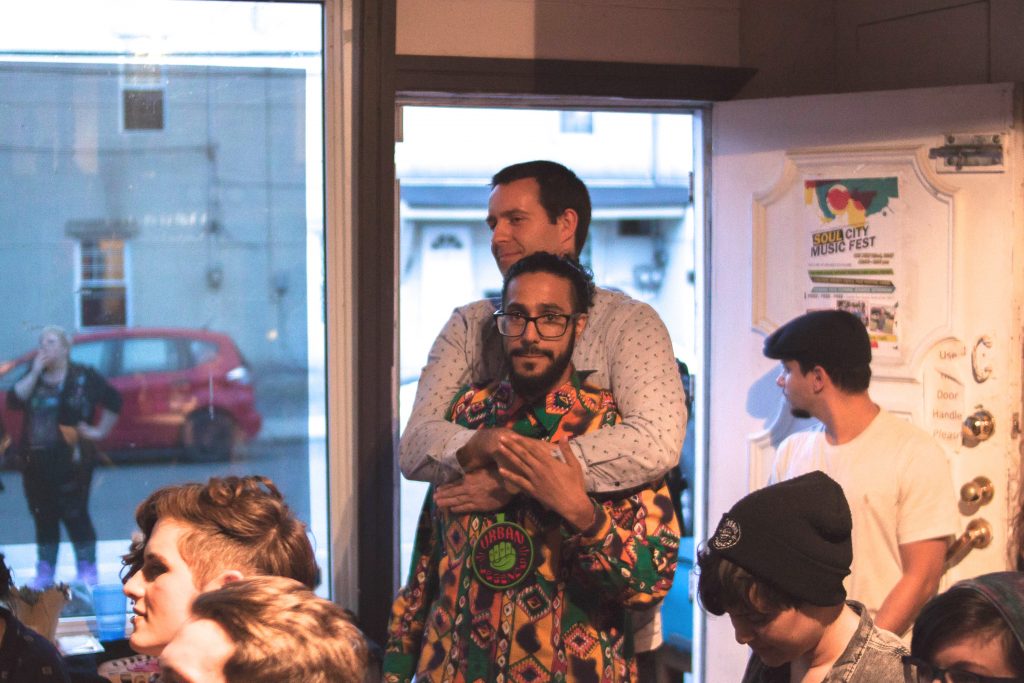 The library is tritely known as a place of compulsory silence, but in a basement conference room at Ottawa’s downtown Main branch, young people are speaking up.

Entering its second summer, Youth Speak is a mentorship program for young people looking to explore spoken word poetry and other forms of writing. Every Monday night of the school year, facilitators with the Urban Legends Poetry Collective guide a group through writing sessions and thoughtful conversation.

At the heart of the program is a desire to put power in the hands of the youth, said Urban Legends co-directors Khaleefa Hamdan and Panos Argyropoulos.

“I find that there are not that many spaces for youth to explore art without some form of structure or expectations,” Argyropoulos said. “Everyone has a story and everyone should have a place to go to tell that story and explore that story.”

The participants will have the opportunity to share some of those poems and stories with the community on April 30 when Youth Speak hosts its annual showcase at Knox Church at the corner of Elgin and Lisgar Street. The event begins at 7 p.m. and also features Edmonton spoken word artist Nasra Adem.

Hamdan said his own experience growing up as a young artist in Ottawa informed the way he structured the program. His father regularly worked 18-hour days and his mother was busy taking care of seven children, so expensive poetry programs with rigid schedules weren’t an option.

Youth Speak participants, by comparison, are free to come and go as they please between 5 p.m. and 8 p.m. at no cost.

“You don’t know the financial background of these young people, you don’t know the situation of the parents, as well, so the idea is to make it as accessible as we possibly can,” he said. “The idea is to have them help raise the next generation of not only artists, but free thinkers. So we put as much power in their hands as possible.”

By the time Devin Premasiri started coming to Youth Speak in December 2016, he was already a published short story writer in his native language Sinhalese back in Sri Lanka and a bit older than the other participants, who are usually under 19. But since moving to Ottawa with his family in 2011, he struggled to find a community of young writers in the city to share and create with.

“I’ve never had the space to share my stuff, and Youth Speak provided me with that space,” he said. “It’s something that I needed . . . I think it helped me transition into who I am today.”

While Premasiri, 23, has since moved on from the program, he still talks about Youth Speak as a formative experience. He was reminded of those Monday evenings at the library while hosting a fundraiser at a local café at the end of March — the scheduled performances ran short and he had to step up and recite his own poetry on a whim.

“That period of time was instrumental in me feeling comfortable talking in front of people,” he said, before heaping praise on the volunteer facilitators.

For librarian Jessica Halsall, who helped bring the program to the main branch, it’s been gratifying to see the how the library has become a place of community for a younger generation.

“I’ve seen this great community come together, and I’ve seen them give youth the opportunity to be involved in the library community,” she said.

In the summer of 2017, prominent local artist Kim Nguyen — also known by her pseudonym King Kimbit — stepped into her role as the program coordinator. As someone who turned to poetry during a difficult time in her youth, Nguyen said she appreciates how powerful making and sharing art can be for young people.

“Poetry saved my life,” she said, “so I can only imagine the direction it’s taken in the lives of other youth.”