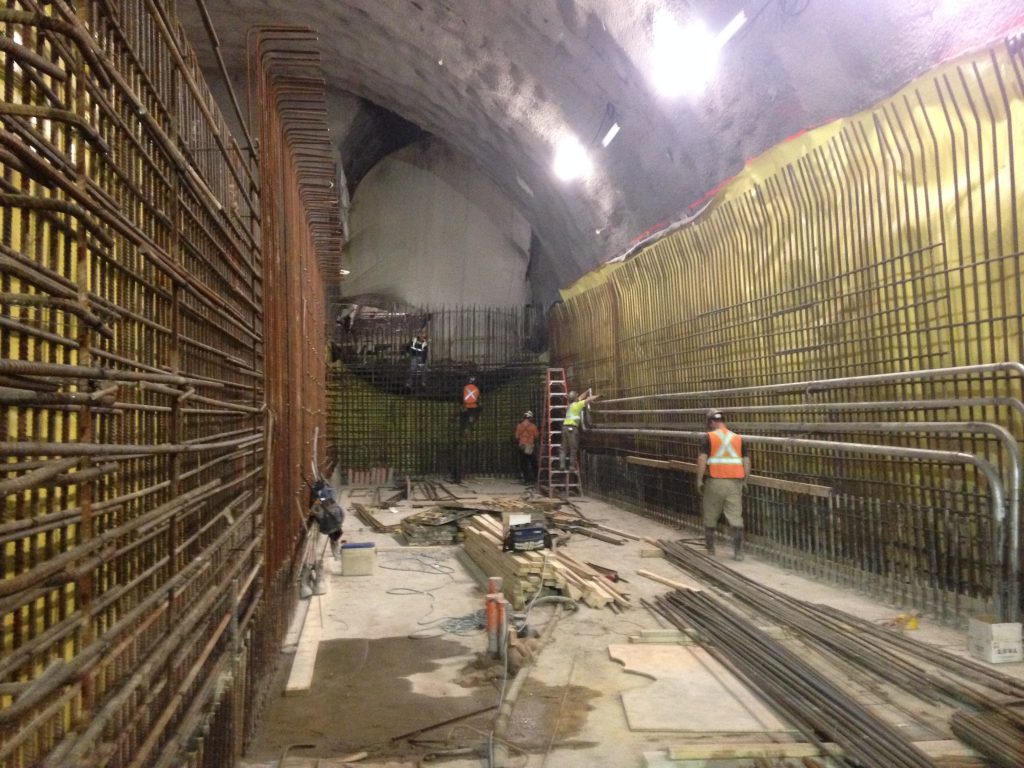 An earlier stage of construction on the LRT's Confederation Line tunnel, underground at the downtown Lyon Station. Photo: OC Transpo/City of Ottawa
April 14, 2018

Ottawa’s much anticipated Light Rail Transit Confederation Line is supposed to go into service in November, but officials can’t guarantee it will be ready for Remembrance Day.

Each year, thousands travel to the National War Memorial in the heart of downtown to pay their respects on Nov. 11. Much of Elgin Street is closed off and the downtown core is packed with people.

Pat Scrimgeour, director of the transit customer systems and planning with the City of Ottawa, said in an email: “It is too early to speculate on a specific date for the launch of the service.”

Since the original LRT completion date of May 2018 was thrown off track, the Rideau Transit Group is facing increased pressure to complete the $2.1-billion contract as new costs – such as continuing to run OC Transpo buses – continue to be incurred.

The city’s finance and economic development committee was recently assured that the Confederation Line would reach “revenue service availability” — or RSA — by Nov. 2 in a recent update given by John Manconi, the general manager of the city’s transportation services department.

But reaching RSA doesn’t mean the line will immediately be ready for use.

West Carleton-March Coun. Eli El-Chantiry stressed the meaning of the RSA date at the meeting.

“I wouldn’t want people to necessarily leave this meeting with the understanding that they’re going to step on the train on Nov. 2,” he said.

Manconi explained the RSA date is the point at which RTG will hand the “keys” to the LRT line to city.

“If RTG meets the substantial completion in the fall, and then achieves revenue service availability, our plan is to launch the train in November,” Manconi said.

He said that before the RSA date can be met, the system is set to achieve “substantial completion” at the end of summer, meaning the system has passed all testing and safety certification tests.

His presentation included pictures of the partially completed structures, as well as a first glimpse of the vehicles that will be used.

“You’re getting a state-of-the-art (Bus Rapid Transit) to LRT conversion, the first in the world,” he said. “On opening day, it’ll be the busiest LRT in North America, carrying 11,000 passengers per hour per direction.”

The photos of the half-built structures caused one councillor to question the RTG’s ability to make the Nov. 2 deadline.

Gloucester-Southgate Coun. Diane Deans asked: “I’m wondering, Mr. Manconi, what your confidence level is now on RTG’s ability to hand over the system to the city on Nov. 2?”

Manconi responded by saying he isn’t concerned with the “civil” aspects of the project, but is focused on ensuring a working system.

“Councillor, you know my style,” he said. “I’m very cautious.”

However, he also acknowledged there’s much at stake for RTG.

“There is a lot of money riding on RTG to make sure they achieve that date,” he said. “They need to achieve those dates for their well-being.”