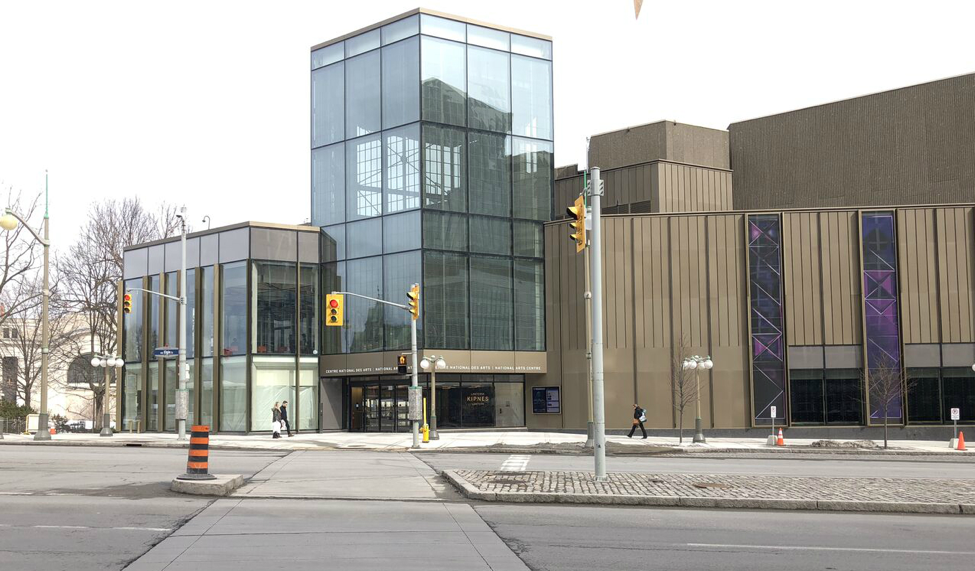 The stunning backdrop behind him makes it difficult to focus on Paul Wells’ introductory remarks. The well-known political columnist’s second ever “Maclean’s Live” event, an interview with federal Conservative Leader Andrew Scheer, is taking place in the National Arts Centre’s Rossy Pavilion in downtown Ottawa, under the evening watch of the National War Memorial. The Peace Tower is centred neatly in the backdrop. Wells begins by mentioning that during the interview, acclaimed Canadian pianist Angela Hewitt will be performing Bach in one of the performance spaces just across the hall.

“You’re the ones who preferred to hear Andrew Scheer talk about politics, so that tells me a little bit about you,” Wells tells his audience of about eighty people.

The new-and-improved arts centre hasn’t been open a year yet, but events like this one demonstrate the NAC’s effort to open itself more to the nation’s capital — serving not only as a venue for cultural events but also a stage for public debate and discussion.

Just two sets of unlocked glass doors separate Wells and his high-profile political guest from the pedestrians passing by on Elgin Street.

In recent months, the shiny new building — dramatically transformed by a $110-million renovation in 2017 — has also been home to gatherings such as “Before the Bell,” a free political panel event hosted by journalists Susan Delacourt and Catherine Clark, and a Public Policy Forum discussion on social media and democracy.

Wells says that he and former NAC president Peter Herndorrf had shared a vision of using the NAC as a political theatre.

“The NAC has long believed that there’s room for smart conversation,” Wells explains. “The idea is that the NAC is an arts institution, but it’s in a political town, and it should reflect that one way or the other.”

He adds: “The more this becomes established, the more it will be seen as a genuine expansion of the NAC’s capabilities.”

Heather Gibson, executive producer of the NAC Presents series and the official in charge of programming for the new rooms, says that the NAC has always been a place for politics.

“This isn’t new for the National Arts Centre to host this level of political discourse,” she says. “I think all you have to do is come to any theatre show, for instance, and it’s quite obvious that politics and arts aren’t necessarily separate.”

The NAC has also previously provided a stage for high-level political drama. Notably, it was the venue for the federal leaders debate in the 2008 federal election, best remembered for a controversy that eventually led to Green Party leader Elizabeth May’s inclusion in the contest. Politicians have also been high-profile political guests (recall Pierre Elliott Trudeau accompanied by Barbara Streisand) and even performances, such as Stephen Harper’s 2009 cover of the Beatles.

Now, though, the NAC’s emphasis seems to be on adding public access or even participation to the discussion — an approach that mirrors the building’s more welcoming glass façade after decades of criticism over its original, bunker-like architecture.

“The NAC has always been an intersection of Canada’s arts and political life,” says Gibson, “and now with its new public face it’s been talked about as being Canada’s living room, which means that it’s a place for conversation and open ideas.”

During open hours, much of the new NAC is a public space free for passers-by to roam unaccompanied. The revamped arts centre is bathed in natural light, and features numerous spaces that can work equally well as an indoor patio or amphitheatre.

Andrew Beattie, president of media enterprise The Sixth Estate which hosted the Beyond the Bell event, says that the NAC’s new accessibility “works well for our format because we don’t charge admission.”

“Our whole purpose is to make our content available and open to the public,” he explains.

While the NAC is providing a space for such gatherings, the events themselves are set up and promoted by their respective organizers.

But many spectators — Wells included — are watching to see whether the more politics-centred events become fully embedded in reborn venue’s identity.

“It’s always been a building you can just walk into… and the renovation is designed as one to remind people that it’s open to them all the time,” he says.

“The more the National Arts Centre reflects its local community as well as the national community, the more vital its contribution can be.”

Produced in collaboration with Artsfile and iPolitics