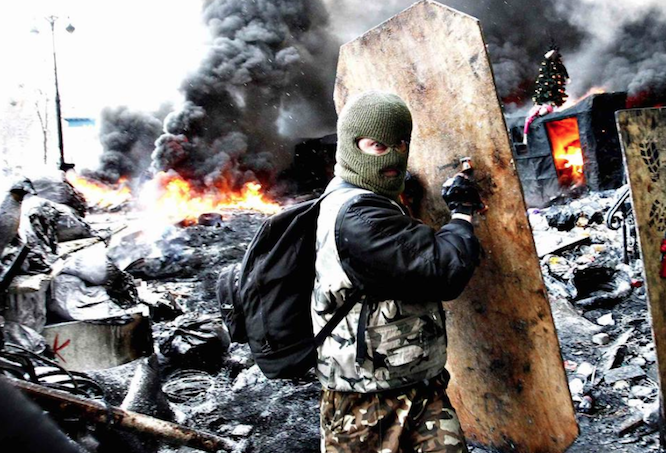 Ottawa playwright Sean Devine's When There's Nothing Left to Burn was chosen to be staged from 75 entries to the University of Lethbridge's anniversary playwriting competition. (Horseshoes & Hand Grenades Theatre)
April 14, 2018

Imagine a world where a bomb exploded on your bus ride to work, where the government forbade you to leave your house between sundown and sunrise, where you were brought in for questioning by authorities because you wrote a song or made a post on social media about what was happening in your city.

Ottawa playwright Sean Devine’s dark political drama When There’s Nothing Left to Burn tells the story of a fictional, unnamed North American city where citizens are trying to live their day-to-day lives in the middle of a violent political conflict.

The play is currently being developed by Crow’s Theatre in Toronto and Horseshoes & Hand Grenades Theatre — an Ottawa-based production company of which Devine is artistic director — and will be presented in a developmental “staged reading” at The Gladstone on Tuesday, April 17.

The one-night, workshop-style performance is intended to help shape the future full production of the play, said Devine.

The award-winning Ottawa playwright said the first spark of inspiration for When There’s Nothing Left to Burn came from the political uprising in Ukraine in 2014.

“I noticed a growing trend in people rebelling against oppressive regimes,” said Devine. “The narrative was influenced by various rebellions happening all over the world, in Venezuela, student riots in Quebec and citizen rebellions in London.”

The play was entered in the University of Lethbridge’s “Fiction at Fifty” playwriting competition celebrating the Alberta school’s recent 50th anniversary. Out of 75 entries from across Canada, Devine’s play was commissioned by the U of L to be developed into a full production.

The play premiered at the university as a student production in November, and this month’s Ottawa performance represents another step in its development towards full, professional staging.

According to a U of L news release, When There’s Nothing Left to Burn stood out to the jury because of its “dynamic story, insightful perspective and ambitious scope.”

Devine said he was inspired by the Kiev revolution among other conflicts and modeled the play on the idea that it is possible that a similar political crisis could occur here in North America.

“I submitted a proposal to them that was based on all of those ideas, as the play started taking shape, that rise of authoritarianism was getting closer and closer to home,” he said. “The play had to stand today, and although it doesn’t take place in a specific North American city, it’s clear that it does take place in North America.”

Devine said the main message he wants the audience to take from his work is a political one about the “fragility of democracy,” and that the play finishes with a line proclaiming that while “it takes a long time to build a democracy, taking one down hardly takes anytime at all.”

The play will only show at the Gladstone for the single staged reading. Devine said the performance is taking place in front of a small audience to test how his hometown audience responds to the narrative.

“There might be a production in a year or so, but right now I just need to do one night — that’s all I basically have budget for.”

He said audiences are a significant contributor to the development of his work, and that he’s pleased to bring this play to Ottawa.

“The past week I had this play work-shopped in Toronto in front of the Toronto community. And I got back from Texas, where another one of my plays was done. And while both of those are great experiences, you don’t exactly feel like you’re contributing to your own local community.”

He explained that artists like to feel that they are contributing to the overall health and well being of their community and that “it’s certainly hard to do that as a playwright unless your plays are done for an audience that is your community.”

Devine said the political environment in the capital also makes the city a great stage for presenting this particular play.

“It’s always interesting to do political theatre in a city where you can almost hope that members of your audience could be if not policy makers themselves, but connected to policy makers,” he said.  “In that sense, not only do you have an audience that you hope will be passionate about politics, but might be in position to change things.”