3 days ago 0 1 min read
We use cookies to provide a personalized experience for our users. By continuing to browse this site, you give consent for cookies to be used.
Got it!
Home > Featured > Carleton students using technology to bring centuries-old manuscripts into the digital age 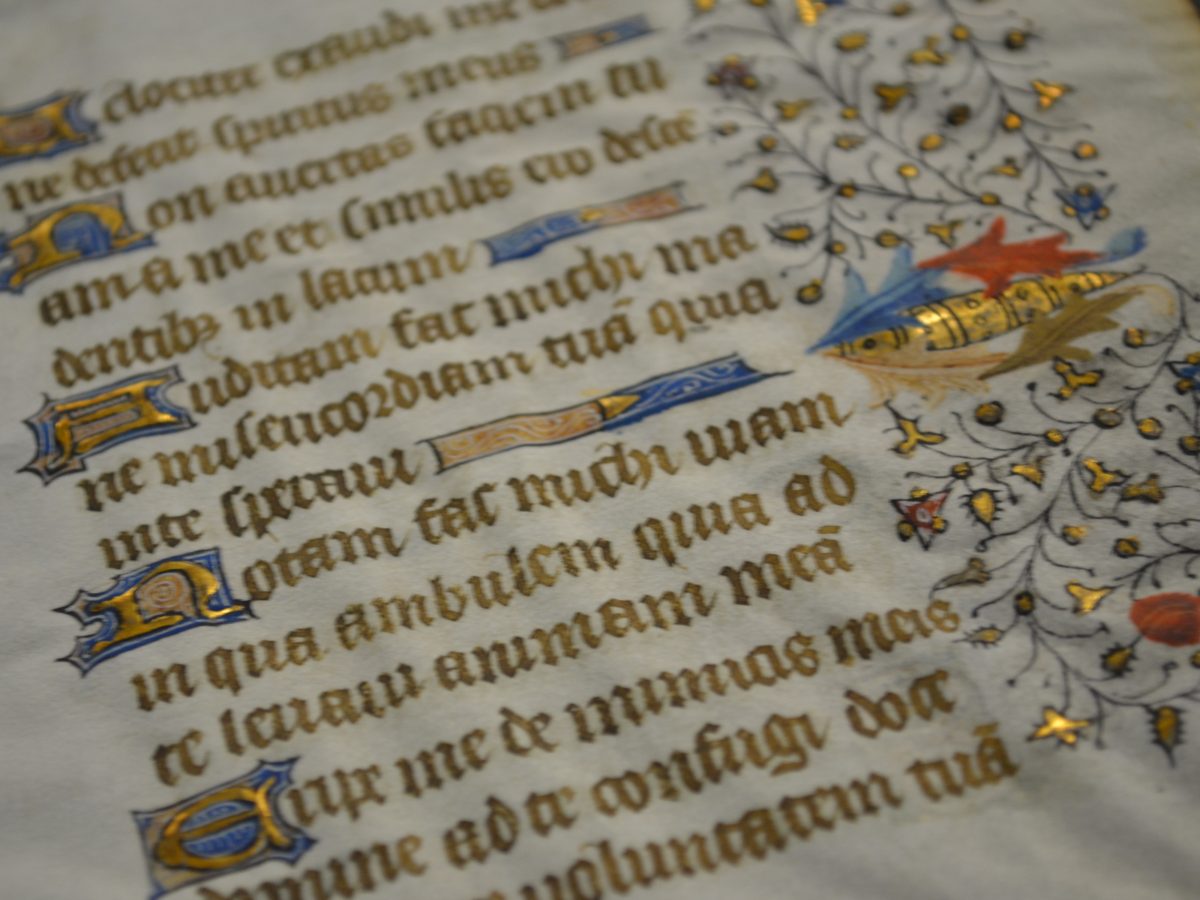 A look at one of the medieval manuscripts in Carleton University's McOdrum Library. [Photo @ Louisa Simmons]
Arts & Culture

Nestled away on the fifth floor of Carleton University’s McOdrum Library is a mysterious collection of centuries-old medieval documents. No one knew for sure how they got to Carleton, or even much about their history … that is, until a group of students began studying and digitizing them this year.

Ranging from the 13th-16th centuries, the documents are held in the Archives and Research Collections and are made up of two bound books (manuscripts) and 16 separate sheets (folios).

Marc Saurette is an associate professor of Medieval History at Carleton University and spends quite a lot of time studying these texts. Laid out on the classroom table in front of him are beautiful folios, hand-designed in red, gold, and blue. But Saurette’s favourite is not one of these elaborate folios; it’s a yellowed, undecorated page that’s falling apart.

Discolouration around the edges of Saurette’s favourite folio suggests that it was once used as a pastedown on the inside cover of a book to attach the rest of the pages to the binding.

He laughs as he pulls it from its protective folder: “it’s also the most illegible,” he says.

The folio, which Saurette believes dates from the 14th century, is an assortment of underlined terms somebody copied from a book about papal laws. Each term is accompanied by a description probably provided by a lecturer.

In short, “these are a student’s notes,” Saurette says, smiling.

And 700 years later, this student’s notes, along with other medieval folios in the collection, are being digitized by modern-day students in a brand new course Saurette is teaching. Over the span of eight months, his students choose one of the folios and create a digital catalogue of information about its history and content.

According to Lloyd Keane, Carleton’s rare book co-ordinator, that’s exactly what the collection should be used for.

“It’s a teaching collection … It’s meant to be looked at, touched, used, rather than locked away … So, you want to touch the big book? Touch the big book,” he says, laying his hand on a 16th century, 178-page manuscript of liturgical hymns.

While the collection is open to anyone to view, access can be limited. In order to view the documents a student has to make a request to the Archives and Research Collections. But when Saurette’s students create their digital catalogues, people will have wider access to them, he says.

In addition to making the folios more accessible, digitization can actually help reassemble larger texts, Keane explains. Most of the folios in the collection were once pages in books, but at some point they were separated because it was more profitable to sell them as singles.

“There are organizations of people interested in medieval studies who are putting together scans of diverse pages. In other words, you can virtually bring a book back together,” says Keane.

The scanning of medieval documents is one part of the digitization process, but Saurette says that technology not only allows folios to be presented, but interpreted in a new way as well.

“Often when we think about digitization, we think of taking an image of it. But these things are hard to read,” he says, gesturing to pages written in scripts that are no longer widely-used. “And so even if access to images are there, that doesn’t mean that access is really granted.”

By publishing catalogues of information about them, people can understand the texts’ histories more easily. These catalogues can be interactive and immersive in a way still images couldn’t be, Saurette says. A digital collection can be encoded so that people can search through the manuscripts more easily. For example, medieval scripts do not look like modern-day fonts, but an encoding program could identify certain letters and elements that appear throughout a manuscript image. This would make it more searchable and therefore easier for people to read and understand manuscripts in the future, says Saurette.

Digital technologies could also help students learn more interactively. Most standard word-processing programs have the ability to use special characters such as letters with accents. But with encoding technologies, such as Unicode, a new set of characters are created to replicate the types of abbreviations and symbols used in medieval writing that no longer exist today. Saurette says instead of simply memorizing a list of medieval abbreviations, students could produce exactly what they see on a manuscript and then figure out what it means: “It’s a more interactive way of teaching,” he says.

“I want my students to play. They can use the inherent malleability of computers to represent very old things in a new way.”

But, despite all the ways that technology can help people interpret medieval texts, Keane says that he doesn’t want to see physical manuscripts disappear from use: “People are starting to understand that digital is good for some things. But at the end of the day you can’t substitute an actual object.”

“With digitization … the goal is not to surpass or get rid of the original but to grant access to it so that it can be used more, and that libraries are not just storehouses of knowledge but actual centres of learning keeping alive what humans have learned over the last few thousand years,” he says.

Digitization can help people interpret, not replace, pieces of physical history. That means that a 14th century student’s notes, scrawled across a now yellowed and damaged page, can be encoded so that 21st century students can learn and understand its history.

City of Ottawa remembers the victims of Friday's bus crash; Transportation Safety Board called in