4 days ago 0 4 min read
We use cookies to provide a personalized experience for our users. By continuing to browse this site, you give consent for cookies to be used.
Got it!
Home > Remembrance Day > Carleton University holds first in-person Remembrance Day ceremony in three years 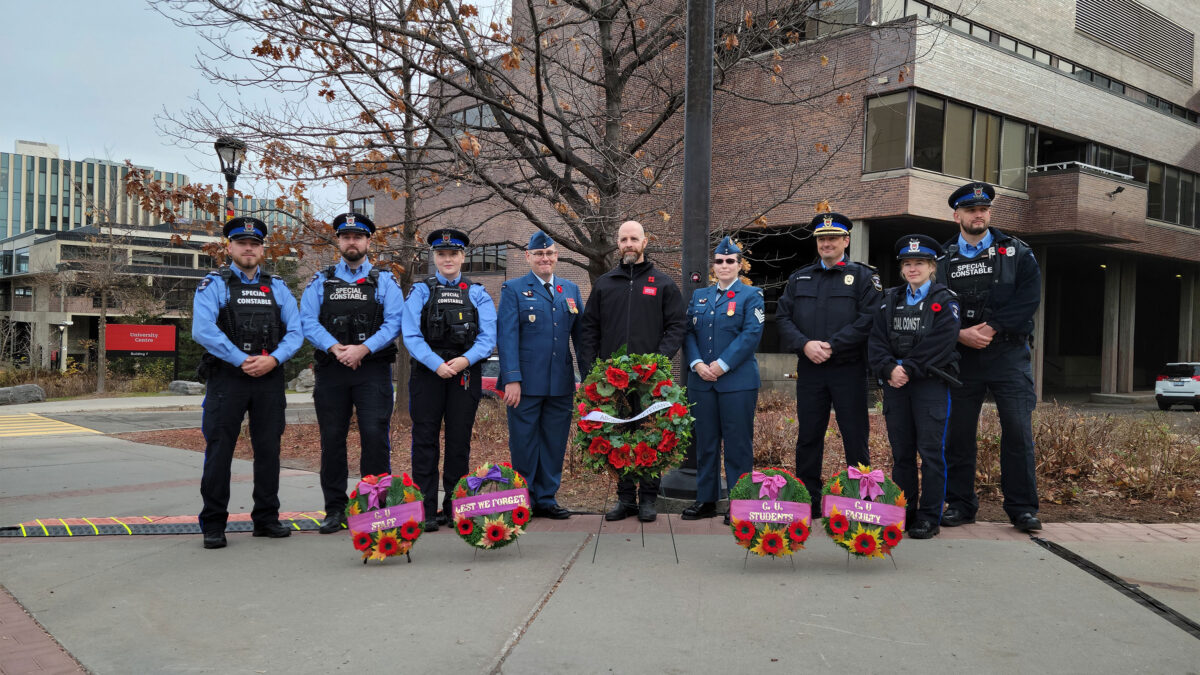 For the first time since 2019, Carleton University held its Remembrance Day ceremony in-person.

The Nov. 11 event began just before 11 a.m., in a space marked by flagpoles on Library Road near the Azrieli Theatre in the heart of the campus. More than 100 members of the Carleton community paid their respects to the 118,000 Canadian armed forces personnel who have lost their lives in wars since the beginning of the 20th century.

The ceremony also paid tribute to the 2.3 million Canadians who have served and continue to serve their country.

Travis Robidoux — a special constable at the university who helped organize the event along with other members from Campus Safety — introduced the ceremony with a speech about the university’s unique place in Canada’s military history.

The university was founded in 1942 as Carleton College at the height of the Second World War, Robidoux explained. Carleton was created as a place where veterans returning home from the war could get an education. Its connection with the Canadian military remains strong today.

“Many students, staff and faculty are currently serving as Canadian Forces members or reservists, or they are retired military members,” Robidoux said.

This was Robidoux’s first time organizing the event. He said he began preparing for more than a month in advance, following his return to work from parental leave.

“I reached out to the pipers, the trumpeters and had Carleton’s choir come out and assist us,” Robidoux said after the event. He then reached out to the president, as well as representatives of students, staff and faculty to assist in laying the wreaths.

Following Robidoux’s speech, Carleton’s choir sang a solemn rendition of O Canada. A trumpeter signaled the beginning of two minutes of silence with the Last Post, and its end with the playing of Reveille (Rouse).

The Last Post is played in the evenings to signal that the camp is secure and that the night guards are in place. Reveille wakes the soldiers, 15 minutes before formal activities.

During the silence, the two flags on the flag poles above the choir — the Canadian flag and the flag of Ontario — were lowered to half staff, as a mark of respect and in tribute for the many thousands of soldiers who have sacrificed their lives for their country.

Carleton University president Benoit-Antoine Bacon gave a speech before the laying of the wreaths.

“Every year on Nov. 11, we pause to honour the men and women who served and continue to serve Canada during times of war, conflict and peace. Today we pay tribute to those who sacrificed so much that our society could remain peaceful and free.

“Thank you so much for taking the time to join us on this very important national day of reflection,” Bacon said.

At the end of the ceremony, the wreaths were brought out on stands by the flagpoles. One by one, members of the Carleton community went forward to pin poppies to them.

Bacon said after the event that he was glad it could be done in-person again.

“It’s much better to be in person to be able to see each other,” he said.

“We do this every year, but the last two years were pandemic years. So what we did were virtual events for the past two years, … It’s a community event. To hear the music live like that I thought was very, very moving, to be able to lay the wreaths like this. So I was really thrilled to see it was back in person today.”