4 days ago 0 6 min read
We use cookies to provide a personalized experience for our users. By continuing to browse this site, you give consent for cookies to be used.
Got it!
Home > News > Canada > Ontario > Chatham-Kent residents battle to save historic, tree-lined boulevard facing sewer upgrade 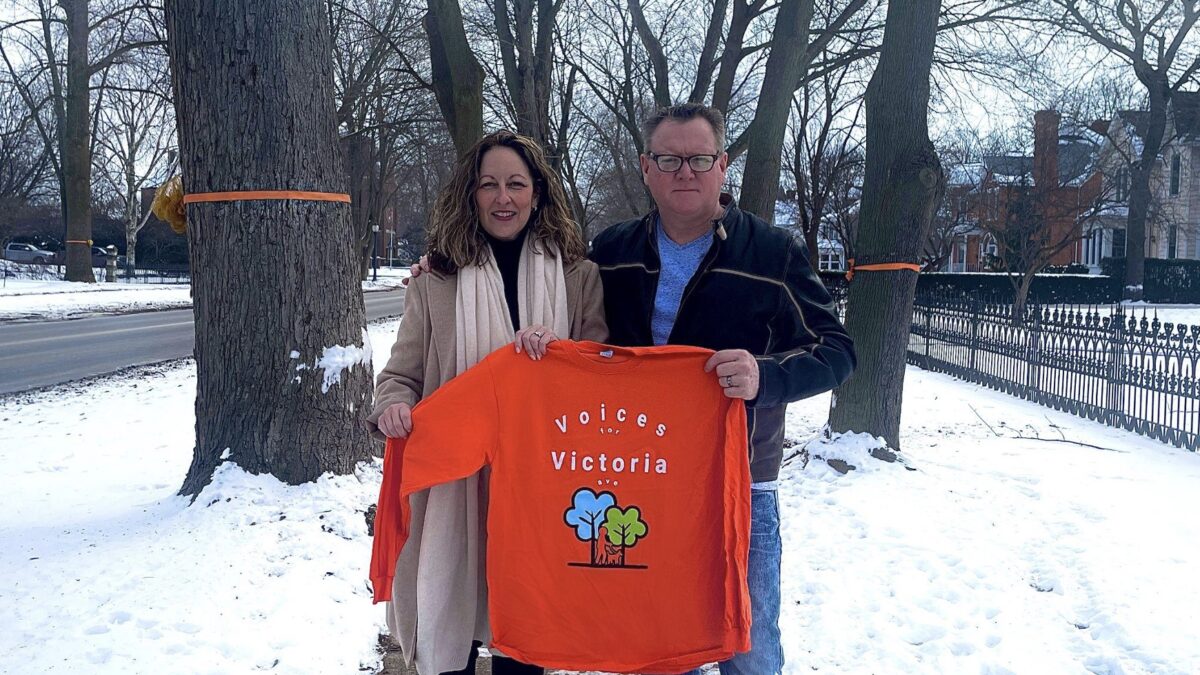 Len Copeland and Danielle Soucie are part of the push to preserve the trees along Chatham-Kent’s historic Victoria Avenue. [Photo © Emily Putnam]
Community

Bright orange ribbons hug trees on Victoria Avenue on a Saturday afternoon in Chatham-Kent. During lockdowns and mental-health walks, residents have filled their weekend afternoons with a stroll along one of the oldest and most prominent streets in the southwestern Ontario city.

A planned sewer project threatens the streetscape of the three-kilometre route, with plans to cut down as many as 19 heritage trees more than a century old. The infrastructure upgrade project is to begin in late 2022.

But the community has its own grassroots movement in the works. Formed by Victoria Avenue residents to counter the municipality’s renewal design, the group called Voices for Victoria is working to convince the city why it’s important to protect the stately maples that have been standing tall since the 1800s.

“We wanted to put ribbons on trees and signs up to alarm people that one of the few majestic boulevards in town was under attack,” said Len Copeland, co-organizer of Voices for Victoria. “We needed their help and their support, and that’s exactly what we got.”

Copeland and his wife Danielle have lived on Victoria Avenue for 15 years and say despite working outside of the city, they chose to live along the street because of its beauty.

They became involved in battling the reconstruction plan when they attended a municipal meeting that detailed the proposed changes and loss of trees.

“They (the municipality) weren’t prepared to answer the question why.”

The preservationists decided to print T-shirts and signs to raise awareness.

“It’s like running through history along Victoria. It’s something that I feel like we need to protect.”

Though the group encourages reconstruction of the century-old sewer system, they say removing the trees is unnecessary and unwanted because of their historical and aesthetic  significance.

The trees “have grown up with Chatham and are harking back to another era,” said Chatham resident Chris McCarthy, who goes jogging regularly along the avenue with his dog.

“It’s like running through history along Victoria. It’s something that I feel like we need to protect.”

The municipality, priorizing modernization and efficiency, said it needs to take the opportunity during sewer reconstruction to bring the busy street up to current standards.

Chatham Coun. Michael Bondy, who has lived on Victoria Avenue for the past 20 years, was the first to raise concerns about the renewal plans.

“The public pressure on the municipality was very, very strong,” said Bondy, who supports the bid to protect the street’s trees. “There was a lot of support for me through Voice for Victoria to change the design, which we were successful in. We aren’t exactly where we wanted to be, but without their support, I don’t know that I would have received any support on council. The organization provided a real backbone to pushing back (to protect) a very traditional street.”

The reconstruction proposal originally included a three-metre path and roundabout. Pressure from the citizens’ group was able to force modifications, saving many of the trees that were previously in jeopardy.

But the battle continues. The city plans to hold virtual information sessions for its Victoria Avenue plans and maintains that the heritage features of the street will be preserved as much as possible.

Voices for Victoria has been posting updates regularly on the group’s Facebook page as the municipality moves forward with its plans.

IN THE NEWS: Friday, March 4