4 days ago 0 6 min read
We use cookies to provide a personalized experience for our users. By continuing to browse this site, you give consent for cookies to be used.
Got it!
Home > Health > Dog experts stress health awareness for short-nosed breeds as they become more popular in Ottawa 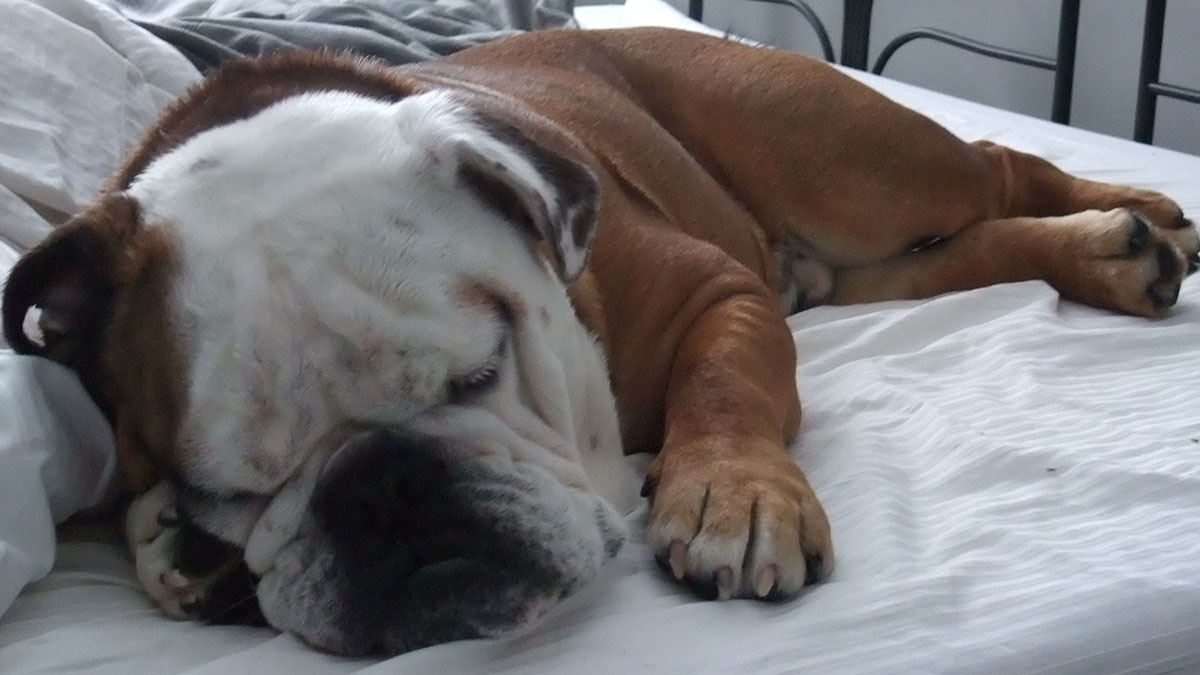 Dozer is a 25-kilogram senior English bulldog. On Monday mornings, he ambles onto Carleton University’s campus in a fitted red vest. Dozer is a therapy dog for the students.

Laviolette has been lucky. Dozer has had few of the health issues that are common to the breed. “He’s had no cherry eyes, no rashes or infections,” Laviolette said. “He has a bit more of a snout.”

These are traits that Laviolette picked carefully when looking for a bulldog breeder. Bulldog owners have a saying, Laviolette explained. “You have to pay upfront to avoid some of the medical issues.”

Those medical issues can cause a lot of suffering to these dogs and can potentially cost owners thousands of dollars. When the costs are too high, dogs are sometimes abandoned and end up at dog rescue facilities.

Flat-faced breeds like French bulldogs and shih-tzus are vulnerable to health issues. They commonly have difficulty breathing because of their wide palates and short noses. In the United Kingdom, a study found that almost 90 per cent of French bulldogs showed signs of respiratory difficulties, and more than half of the animals with trouble breathing severe enough to require clinical intervention.

It is hard to resist the temptation of a small, cute and comical companion, though, and dogs are popular pets among Canadians.

A study conducted by the Canadian Animal Health Institute found that, in 2018, 41 per cent of households had at least one dog, nudging aside cats as the most popular pet in Canada. But it wasn’t until 2014 that the French bulldog, along with other brachycephalic (or short-nosed) breeds, became popular. That was the year the French bulldog broke into the Canadian Kennel Clubs’ top 10 most popular breeds.

Since then, the French bulldog has become more popular. It’s No. 5. In Ottawa, the flat-faced breeds are not that numerous, when compared to the golden retriever or the German shepherd. Between 2015 and 2015, almost 10 times as many Labrador retrievers were registered with the City of Ottawa than French Bulldogs. But since they first appeared in 2015 – just five back then— they have seen the fastest increase in popularity of any breed.

There’s a good reason for their popularity, says Karen Cram. Cram is a master breeder with the Canadian Kennel Club and she’s worked with French bulldogs and pugs for over 30 years. Their pear shape, big eyes and rounded faces are highly prized by owners.

“They are the sweetest, kindest little dogs. Like all dogs are!” she said with a laugh. “But these are like people in a dog body.”

More demand for the puppies, however, has also meant that health issues can become more common and more severe.

“Thirty years ago, if you had asked me if this breed would ever become exploited, I would have bet you my first-born son that it never would happen,” says Cram.

Cram has spent years breeding French bulldogs along strict scientific guidelines meant to minimize the risk of health issues. She says that bulldogs used to be rare and hard to breed, but that the internet changed things drastically in recent years.

“It got to the point that people could just email somebody on the other side of the world,” she says, “buy a breeding pair, have them shipped to their door in Montreal or wherever they lived and go to town breeding these dogs.”

But Cram says that there’s a reason she follows such strict breeding standards. French bulldogs with non-standard colours, for example, die more often as puppies or develop more serious health issues if they survive. The merle gene responsible for spotted fur, for instance, is considered lethal by Canadian Kennel Club breeders.

In the U.K., the British Veterinarians’ Association has warned people to reconsider buying brachycephalic breeds, while the Dutch government announced last year they would start enforcing laws banning the breeding of French bulldogs, pugs and shih-tzus.

There are no laws in Ontario that regulate the breeding of brachycephalic dog breeds or the sale of such dogs online.

The graphic below shows dog registration trends in the U.K. from 2013 to 2018. It compares the three most popular brachycephalic breeds (French bulldogs, pugs, and bulldogs) with three of the top non-brachycephalic ones. Over that period the number of French bulldogs increased roughly five-fold and in 2018 there were more of registrations of the breed than even the Labrador retriever.

Wendy Bolf has been working with rescue dogs for 10 years and is one of the co-founders of Ottawa Dog Rescue. The organization focuses on fostering rescue dogs in new homes and has connections with foster homes around the city. It also works with the Ottawa Humane Society and other shelters in the region.

Bolf, who does in-take and adoption co-ordination for the Rescue, said she’s seen many brachycephalic breeds come in with a slew of health issues. The pugs that the rescue has taken in have all needed surgery to shorten their palate and widen their nostrils so that they can breathe properly, she said.

“It’s heart wrenching to listen to a dog gasping for breath because they can’t breathe properly,” she said, adding that the breed can also develop eye problems because their eyes protrude.

Bulldogs, she said, come in needing similar palate and nostril surgeries, along with skin infections that develop when owners don’t thoroughly clean the dog’s wrinkly skin.

“People don’t really think about that when they get these dogs,” she said. “They go more for the aesthetics.” The dogs end up in shelters when health issues come around and owners don’t have the money to take care of them, she continued.

Dr. Ariane Finsten has been a veterinarian at Centretown Veterinary Hospital on Somerset Street West since 2017.

She says prospective owners should do some research before buying a brachycephalic dog.

“It’s best to talk to a breeder, visit dog parks and talk to owners of the breed they like,” says Finsten. “Ask questions and be cautious with Googling information.”

According to Finsten, most breed-specific issues are inherited, so it’s important to ask the breeder for as much information as possible. Some of the surgeries for the common issues that brachycephalic dogs face can range anywhere from $600 to $12,000, says Finsten.

When it comes to determining future health costs, Finsten said one quality in brachycephalic dogs can help indicate health risks.

“The more the face is “pushed in,” the higher risk they will need reconstruction of their nose, cherry eye repair and resection of their facial folds if it’s rubbing on their eyes,” says Finsten.

For pugs and shih-tzus, Bolf stressed that it’s essential for owners to find a reputable breeder, and for breeders who aren’t breeding for optimal health, to change their breeding habits.

She said she wonders whether bulldogs and French bulldogs should be bred at all, due to the fact that the females often have to be artificially inseminated and then undergo C-sections during birth.

To ensure that owner education happens correctly, some say the advertising media has a big role to play as well.

Dogs across the pond

Jemima Harrison is the producer of the BBC documentary Pedigree Dogs Exposed, and founder of the Campaign for the Responsible Use of Flat-Faced Animals (CRUFFA) in the United Kingdom.

The organization focuses on advocating to minimize the use of flat-faced breeds in advertising, so as not to fuel interest in the extreme aesthetic features that lead to their health issues. The mission is to point out to advertisers that they are endorsing a welfare issue, Harrison said.

When the organization started in 2015, “brachycephalics were being used to pimp everything from cushions to pajamas to sport…” she said. “If you could sell something, it got to the stage where you could sell it better if it had a picture of a pug on it, often at absolutely zero relevance to the product.”

Since the organization started in 2015, the British Veterinary Association, dog welfare charities, and the Brachycephalic Working Group hosted by the Kennel Club in the U.K. have sided with that stance.

Harrison added that it’s her mission this year to push U.S. and Canadian vets to endorse the same view, and be more outspoken about the issue.

A 2017 study by the Royal Veterinary College cited the increasing popularity of flat-faced brachycephalic dogs in the U.K., and showed concern that these breeds are susceptible to facing health conditions that are directly linked with their appearance.

For its recommendations, along with educating the public about the need to breed dogs for health rather than for looks, it stressed the need to moderate the use of flat-faced dogs in the media.

She also stressed an increased importance for owners to be educated about the possible health concerns their dog faces. A July 2019 study from the Royal Veterinary College, which included owners of more than 2,000 pugs, and French and English Bulldogs, found that a fifth of participating short muzzled dogs had gone through at least one corrective surgery. Only 6.8 per cent of owners consider their dog to be less healthy than average for the breed.

Harrison admitted that it would be “absolutely wrong” to say that every dog who is a flat-faced breed ends up with health issues, but “the issue is that too many (do).”

Still, with some circles calling to ban the breeds, Harrison said she’s unsure about that stance.

“Some weeks I’ve seen too many awful stories about dogs dying because of the shape that we’ve inflicted on them, and I feel that they should be banned. And other weeks I’m full of hope, because there are a handful of breeders, particularly in Europe, which are now trying to breed longer-nosed, healthier, fitter brachycephalic (dogs),” she said.

“It’s fine to call for a ban, but it’s unlikely to happen, so therefore you have to work with the imperfect situation, which is to encourage the better breeding of them.”

Laviolette recognizes that there is something special about the breed. “Human are fascinated by them,” she said. “I wonder if that’s partly because of what they look like. It works for them and also against them.”

She would like to see bulldogs bred for better breathing, ears and eyes. On a hot day, Dozer has trouble cooling down through his breathing, so Laviolette has to walk him near water.

“My personal opinion is that there is a part that’s cruel and selfish in breeding dogs this way,” she says.

“I do so much for my dog to be happy. But what if he could just walk with me? If Dozer could enjoy those things I would be a much happier owner.”