I downloaded the ‘COVID Alert’ app: Here’s how it went on the first day

4 days ago 6 min read
We use cookies to provide a personalized experience for our users. By continuing to browse this site, you give consent for cookies to be used.
Got it!
Home > Life > Halloween has the potential to be a real killer 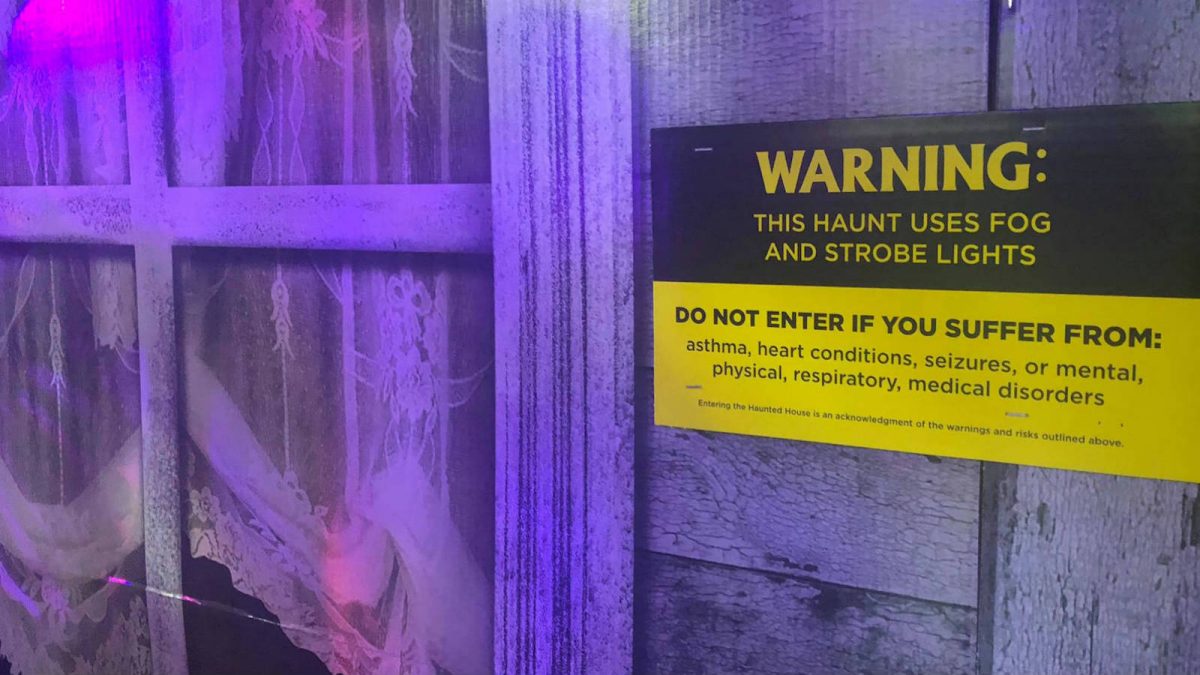 This house warns visitors of the rosks for those suffering from Epilepsy.
Health

Halloween may actually have a small chance of really scaring someone to death. For adults and children with epilepsy, Oct. 31 has the potential to be a killer night.

People may be familiar with the signs outside of haunted houses warning people with epilepsy, heart conditions and pregnancy of the flashing lights and fog. Someone with photosensitivity epilepsy should heed these warnings too because they could trigger a seizure.

What they should really be worrying about, she said, is missing medication, lack of sleep, alcohol, stress and excitement which can trigger seizures and unfortunately, can all occur on Halloween night.

“As a child there were haunted houses, barns and displays which I could not be involved in,” said Bronwyn Clifton, a Queen’s University student studying Concurrent Education.

Clifton has suffered from epilepsy since she was six. She remembers missing out on school, concerts, movies and arcades because of the potential seizure triggers.

“They were the two most frightening moments of my life,” she said.

A seizure is a misfiring of neurons in the brain, said Porter. Where the neurons misfire in the brain determines what a seizure looks like. If the neuron misfires in the part of the brain that controls their arm, it may shake, but it will not be painful.

“What can be painful is less the seizures themselves than the environment,” Clifton said.

Someone suffering from a Tonic-clonic seizure runs the risk of banging their head or falling on something hard, said Porter. This can be dangerous especially if it were to happen at night while trick or treating or at a Halloween party.

Although it is very unlikely a seizure could cause death, it is possible. Someone could have a prolonged seizure or suffer from Sudden Unexplained Death in Epilepsy (SUDEP).

What is more likely is death by accident as a result of a seizure, said Porter. For example, if someone were to have a seizure while driving or in a pool.

It is important if you have epilepsy to be aware of your triggers says Porter and if you have friends or family that suffer from seizures to look out for them.

There are many options for people  who want to celebrate Halloween to make their homes and parties safe for people with epilepsy.

Clifton agrees. It is important to be aware of how the decorations, effects, and lighting you are using can impact the people you interact with on Halloween.

“Obviously, it is not possible to cater to every disability,” she said. “But educating yourself on the various triggers for many epileptics will help make Halloween more inclusive.”

There are also children who follow strict diets that restrict them from having Halloween candy. The Teal Pumpkin Project helps kids with dietary restrictions still enjoy Halloween. To participate you paint a pumpkin teal, put it on your doorstep and have non-food items to give away such as stickers, glowsticks and playing cards.

The Teal Pumpkin Project states its aim is to “create a safer and happier Halloween for all.”

“I think what’s great right now is that there are so many ways to accommodate people on special diets or want to avoid triggers that are very simple,” said Porter.

The most important thing to know this Halloween is if you see someone having a seizure do not panic. Most seizures are not medical emergencies.

“You time it, you keep the person safe, and you stay calm,” said Porter. “If the seizure is more than five minutes or they have two in a row you call 911.”

Halloween should be a celebration all people feel safe and comfortable enjoying. Porter recommends people with epilepsy know their triggers and manage them the best they can.

“A lot of the ways to reduce seizure triggers are very similar to living well,” she said. “Sleeping well. Eating well. Exercising. Living as healthy as you can.”

It is also important for people to educate themselves about epilepsy and what they can do to make Halloween as inclusive as possible.

“Being aware of the commonality of epilepsy and the diversity of the condition is one step closer to creating an accommodating world for those with epilepsy,” said Clifton.

Birds are good for your mental health, study shows

ICYMI: Satellite testing sites come to an end as results show mobile tests conducted in those locations did not det… https://t.co/u18T03gjyV

ICYMI: In a new survey, more than 100 staffers reported baths and showers are missed regularly, emotional support i… https://t.co/ImGFdWACy3

Professional sports leagues are taking different approaches to restart their seasons. The NHL, NBA and the WNBA cre… https://t.co/Ep01e8QmxI

ICYMI: Ontario plans to spend $309 million to help keep children and staff safe as they prepare for 2 million stude… https://t.co/BNUsPoyNqi