5 days ago 0 3 min read
We use cookies to provide a personalized experience for our users. By continuing to browse this site, you give consent for cookies to be used.
Got it!
Home > News > Ottawa > Hunt Club community presses Ottawa library board for a branch to end ‘systemic discrimination’ 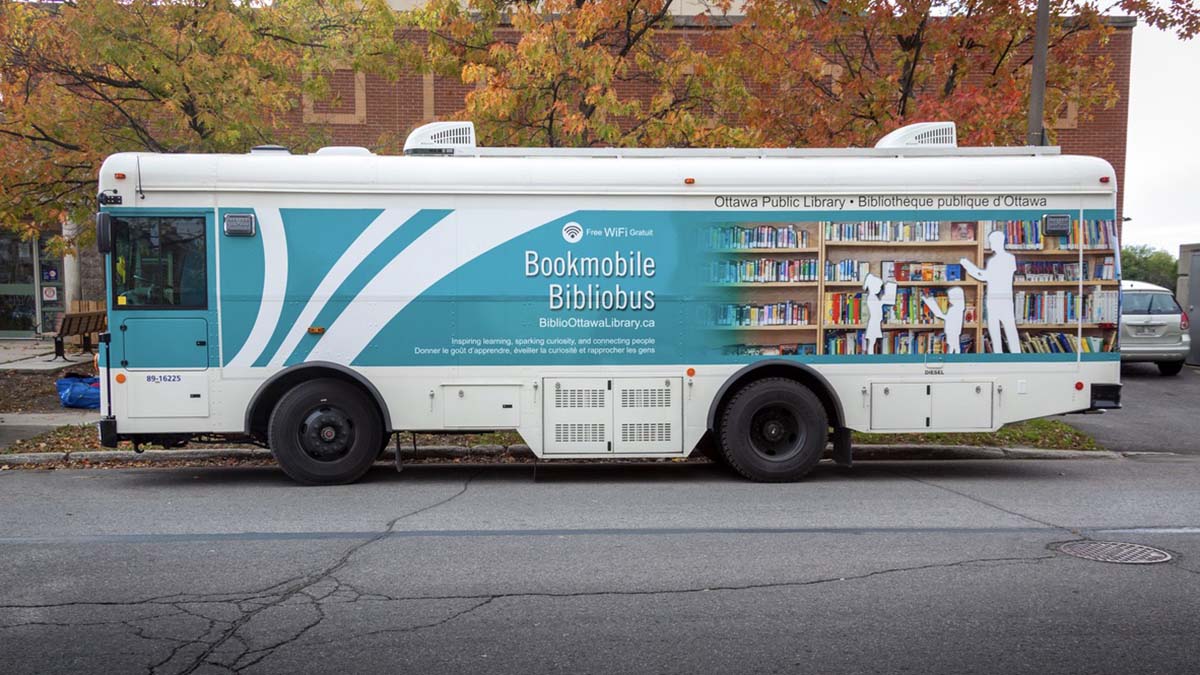 Served only by a bookmobile (pictured) and book-exchange vending machine, the Hunt Club community is seeking a new south-end library branch from the City of Ottawa. [Photo courtesy Ottawa Public Library]
Books

The Hunt Club Community Association is lobbying the Ottawa Public Library Board to build a branch in the south-end neighbourhood, insisting it’s long overdue.

John Reid, a member of the association and a leader of the library battle, says the community has been fighting for its own branch for 40 years.

“I don’t think it’s intentional, but there has been systemic discrimination against our area,” said Reid.

The Hunt Club East — Western community is home to about 30,000 people, according to the Ottawa Neighborhood Study. The area’s library needs are served by a stop for the OPL’s bookmobile — a bus converted into a miniature library — a book kiosk and book lockers.

The book kiosk is a vending machine system that allows customers to access “the latest reads” in lieu of a bricks-and-mortar branch with shelves of books. And the book lockers further borrowing, giving the public an opportunity to go in and pick up books they’ve placed on hold.

The bookmobile stop is at 3310 McCarthy Road and provides the community with access to some of the library’s books on Wednesdays from 3:30 to 5 p.m.

“These solutions are a great stop-gap and a good measure to ensure there’s coverage — but it’s certainly not a solution,” said Orleans Coun. Matthew Luloff, chair of the OPL’s board of directors.

At a September meeting of the library board, Reid presented an appeal from the Hunt Club community to finally secure a branch. He began by quoting Luloff himself.

“In taking on the role of board chair, Coun. Luloff said, ‘I am concerned there are areas of our city that are not currently serviced by an OPL branch, and I have every intention of setting the conditions to remedy this,’ ” said Reid. “That intention isn’t reflected in the (current OPL) work plans. This is your opportunity to remedy that.”

Reid further argued that the area, which is located east of the Rideau River and mainly north of Hunt Club Road, “has the population of Almonte, Arnprior, Carleton Place and Perth combined, each of which has a public library.

“We have bookmobile service,” Reid continued, “which provides one per cent of the service of a branch, and a kiosk service.”

Reid also noted that city-wide library closures because of the COVID-19 pandemic had, ironically, finally leveled the playing field for the underserved Hunt Club area.

“Our objective is to obtain equitable library service for our area,” he said. “We hadn’t anticipated achieving that so quickly when you closed all the branches, and it certainly wouldn’t have been our preferred way to achieve equity. We hope you find a more sustainable means.”

Though Luloff acknowledged that library service in the Hunt Club community is not sufficient to meet the demand for books and other borrowable items in the area, he said that the process to get a branch is a difficult one.

“The problem is that we need to get the facilities master plan complete, so we know where we can redeploy resources and what work we need to do with the city to get the library built,” said Luloff.

Preparation of the facilities master plan is a process the OPL is undergoing to determine where there is too much or too little service across Ottawa.

OPL is still developing the plan, which will look at variables such as user patterns and population density.

“We are delayed because of COVID,” said Anna Basile, the division manager of corporate services for the Ottawa Public Library. “Our original intention was to bring the facilities principles and parameters to the board in September.”

She said library managers are now hoping to get the green light from the board to present the facilities master plan at a library board meeting in February.

“Assessment will take a couple of months,” said Basile, adding that in the “best-case scenario” would see officials o back to the board in June “with the results as well as the recommendations.”

Basile said that once the facilities master plan is done, the OPL will use the recommendations and match that with its funding plan.

“The outcome of that information will very likely indicate that we need a new branch in the south end of Ottawa,” said Luloff.

Pandemic Pets: Consider the consequences when you adopt, experts say