3 weeks ago 0 4 min read
We use cookies to provide a personalized experience for our users. By continuing to browse this site, you give consent for cookies to be used.
Got it!
Home > Arts & Culture > Music > Local music industry beats pandemic blues with third Encore Ottawa virtual concert series 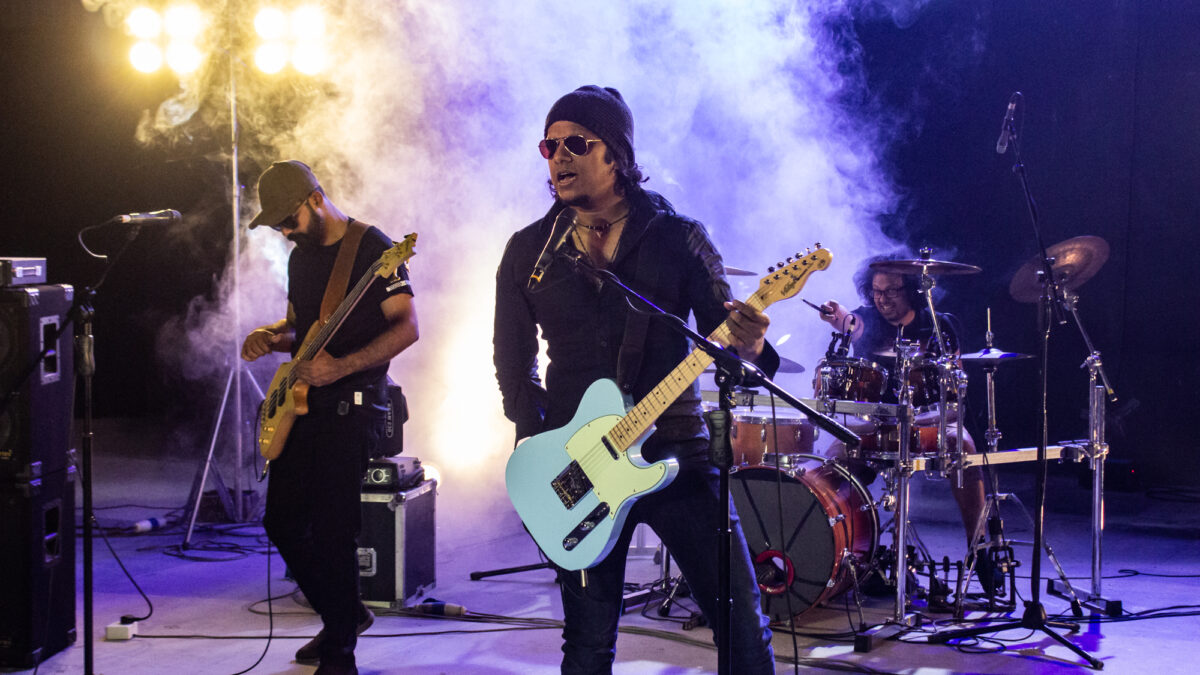 Bangladesh-born rocker Ash Ravens, who moved to Ottawa during the pandemic, performed in an April 7 concert hosted by the Ottawa Music Industry Coalition and recorded at the Shenkman Arts Centre in Orleans. The online event was part of the OMIC-organized Encore concert series that has supported dozens of Ottawa artists through the COVID-19 public health crisis. [Photo courtesy Ash Ravens]
Arts & Culture

Ottawa musicians across various genres are performing in the third edition of a virtual concert series organized by the city’s main music industry advocate to ease the impact of the pandemic on local artists.

The Ottawa Music Industry Coalition, a non-profit organization that serves the capital’s professional musicians, is in the midst of its third season of Encore Ottawa, a lifeline for many local artists during the COVID-19 crisis.

Organized as the Omicron variant spread across Canada during the first four months of 2022, Encore Ottawa 3 features more than 30 pre-recorded, 25-minute sets by Ottawa musical acts in 14 concerts. The performers range from emerging artists to well-established award winners in concerts that showcase an array of musical genres.

The first concert was held March 24 and featured the retro soul band The Commotions, jazzy R&B singer Dominique Gorley and others in performances recorded at Meridian Theatres at Centrepointe in Nepean and at the Shenkman Arts Centre in Orleans.

The weekly shows, which have also been broadcast on Rogers TV, run through May 12, when The Angelina Hunter Trio is to perform.

“It’s certainly helped me establish myself in the city. It is great getting that experience and recognition and you will always have the televised, recorded show that you can send when you’re applying for other venues, grants, or festivals.”

“We wanted to have one show every weekend, sell tickets and have an audience — and that was last December. And then we suddenly went back into lockdown,” said Karim Rostom, a program co-ordinator at OMIC and a local musician who performs under the stage name Kasien.

After quickly pivoting their delivery method, the 25-minute paid performances were recorded by all participating musicians, with funding and other support from OMIC, Rogers TV and the two venues in the east and west ends of the city.

“There was a two-week window where we said OK let’s do it, and just went through all the recordings. … It was great to actually do something,” said Rostom.

Two concerts have aired on Rogers TV every Thursday night. The next show, which can be seen on Rogers at 10 p.m. on May 5, features electropop artist ISØBEL and alt-pop singer-songwriter Vi.

“I’m so honoured to be a part of this showcase by OMIC,” Juno Award-winning singer and composer Kellylee Evans, who performed March 31, said in a March press release announcing the latest series.

“I’ve been hearing so much about the work that they have been doing to support local artists since their inception, especially during the pandemic,” said Evans. “Their recognition means a lot to me.”

For the first two seasons, Fawcett explained that they were just “pooling existing resources.” But for this third season, he said Shenkman and the other partners in the concert series were able to put together a successful grant application.

They secured funding for the performances through a special program of the federal Department of Canadian Heritage.

Allan Sansom, who is also involved in the project, has co-ordinated events at the Meridian Theatres at Centrepointe for more than a decade.

“We had a watch party for the (March 24) premiere,” said Sansom. “A lot of the artists were there, and I was there, and it was amazing to see them rooting for each other and celebrating each other’s virtuosity and brilliance in songwriting.”

The music scene in Ottawa is a close-knit community. These past two years have taken a toll on the community, as the pandemic cut gig opportunities.

“It has been very hard to record new material, with coordinating with other musicians,” said Rostom. “Also, just being stuck at home working is not very conducive to be creative.”

Ash Ravens is a local musician and professional guitarist new to the capital. He produces music in English and Bengali and also performs instrumentals. He puts his music under the rock umbrella with a focus on the human experience

Ravens has travelled widely pursuing his music career. The Bangladesh-born artist had lived in Los Angeles and Australia before moving to Ottawa last year.

He explained how it was a challenging experience for him to navigate as a musician in a new city during the pandemic. He said he mostly networked with his new music community through social media, where he was able to make connections and friends.

Ravens emphasized how positive the experience was when he joined OMIC, which operates as a membership organization.

“It was very, very welcoming and they are very supportive of newcomers,” he said.

OMIC’s mandate is to promote the local industry — including the City of Ottawa’s long-running quest to make the capital Canada’s “music city” — and to provide artists with opportunities to showcase their work.

“It has been very hard to record new material, with coordinating with other musicians. Also, just being stuck at home working is not very conducive to be creative.”

“The members expect us to provide them with news information opportunities and this was the best way we could provide artists with an opportunity for performance during the pandemic,” said Rostom.

Since moving to Ottawa, Ravens said he has participated in several gigs around the city and is looking forward to releasing a new album soon.

“It’s certainly helped me establish myself in the city,” he said. “It is great getting that experience and recognition and you will always have the televised, recorded show that you can send when you’re applying for other venues, grants, or festivals.”

Sansom said Encore Ottawa 3 has helped local artists “with visibility. It’s another opportunity for them to be seen and for audiences to be reconnected with them. Promotion is another one. By appearing in venues like Shenkman Art Centre and Meridian Theatre at Centrepointe, I’m hoping it adds some credibility to the artists when they play elsewhere.”

For the Shenkman Arts Centre, Meridian Theatre at Centrepointe and OMIC, springtime is bringing fresh opportunities, including hosting more in-person events. They are urge local music fans to try to keep up to date at their websites as new event information is being released regularly.